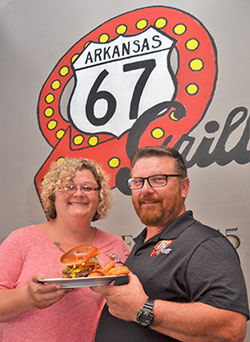 For Heidi and Stacey Morrison, the 67 Grill is a family venture. Originally located in Friendship, the couple and their children, Judson Doran, Melissa Heft and Madelyn Morrison, along with other family members, operate the grill in downtown Arkadelphia.

The Friendship location provided a great opportunity for the couple to “get their feet wet” and learn about the restaurant business.

“We started with a food trailer and a small building,” Heidi said. “After about 18 months, we decided to move to an area with more traffic.”

The area with more traffic is the vibrant downtown area of Arkadelphia, just off Arkansas 67. The restaurant has the charm of a hometown restaurant, featuring high ceilings and a welcoming atmosphere. The couple’s daughter, Melissa, hand-painted 67 Grill logos on the walls that add a nice touch. 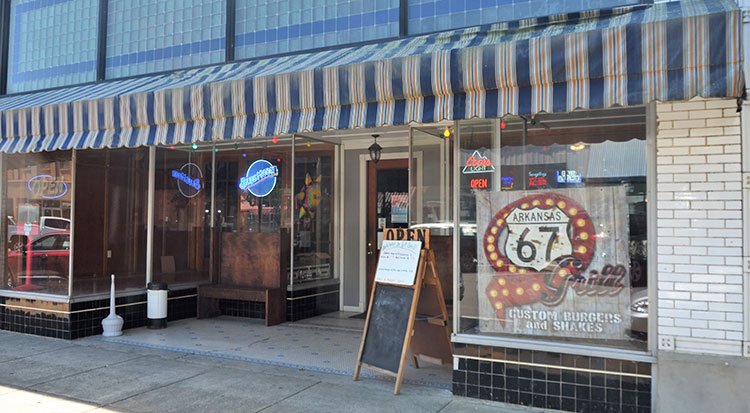 67 Grill is in downtown Arkadelphia.

Regular customer Chelsea Loy of Malvern told me she loves the wings at the 67 Grill, as well as the hamburgers.

“I love everything on the menu, especially the coleslaw, which is different from what you get at any other restaurant,” she said. “The atmosphere is fun, relaxing and laid-back.”

The coleslaw is very, very good. Heidi uses a family recipe that delivers a creamy, peppery slaw that is a show-stopper. On a hot day, I think I could make a lunch out of the coleslaw. 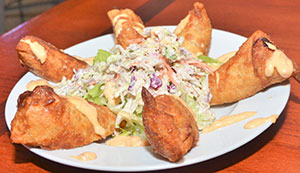 The Reuben egg rolls are made from scratch and include corned beef, Swiss cheese and sauerkraut inside a hand-rolled egg roll fried to yummy perfection. A nice helping of the 67 Grill’s famous coleslaw is on the side.

The hamburgers are named after friends in the Arkadelphia community. The couple said the Big Bubba Burger that includes pulled pork, bacon, cheddar cheese, grilled onions, barbecue sauce, lettuce, tomato and pickle wasn’t named after anyone, but several customers have claimed the honor. 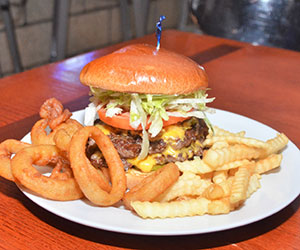 The Clifford is one of the 17 burgers on the menu.

I tried the Clifford Burger. It is a creation consisting of two juicy, hand-patted beef patties, two slices of melted American cheese, grilled onions, jalapenos, lettuce, tomato, pickles and mayonnaise sandwiched in a very good brioche bun. This local favorite provides a smorgasbord of tastes as diverse as its components. I had onion rings and fries with it, which were good also. Other sides include sweet potato fries, baked potato, loaded baked potato, barbecue-loaded baked potato and fried okra.

Heidi, raised in Germany, showed her German heritage when I was delivered the 67 Grill’s pork loin platter, which includes two pieces of  hand-breaded, flattened fried pork loin with fries and coleslaw. The pork loin was cooked to a perfect golden brown and was very moist on the inside. I told her the pork tasted like pork schnitzel, and she grinned and nodded. It is a must-try.

The desserts change often. I sampled the Salted Caramel Brownie and Carrot Cake. They were both great options to top off a wonderful meal.

The 67 Grill is a restaurant where you will feel at home, which often leads to a great, relaxed dining experience. Stop by and see Stacey and Heidi. You will enjoy a great meal and maybe make a few new friends. 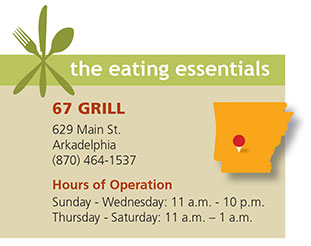