But in his Dad time, Elkins — whose pen name is J. Theron Elkins — does writing of a different kind. And rhyme. 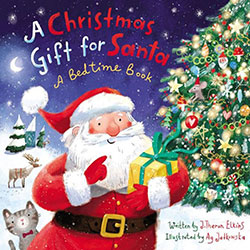 Just back from his travels
Where he left handmade toys
To be opened by all
Of the good girls and boys.
Would he get a present?
Santa quietly thought.
Did no one remember?
Was he simply forgot?

It’s an excerpt from his latest children’s book, A Christmas Gift for Santa: A Bedtime Book.

Elkins explains, “It’s about Santa Claus who comes home, and he’s like, ‘Hey, what about me? Do I get a present? I’ve been delivering toys all over the world!’”

He hopes it will help children see that “Christmas is not always about receiving.” And the book, which was released in October, has already done that — at least at home.

“Even my 3-year-old has already asked, ‘What are we going to get Santa this year?’”

That 3-year-old is Elkins’ son, Theodore — or “Teddy Bear,” as he’s called on the dedication page. The book is also for “Itty Bit,” Elkins’ 11-year-old daughter, Isabelle, and “Peanut,” his son, Samuel, who was born in July.

His kids, after all, inspired him to become an author. His first book, You Are the Pea, and I Am the Carrot (2013) was written about his daughter.

Admittedly a little “Christmas crazy,” Elkins knew he wanted his second book to be about his favorite holiday.

At his North Little Rock home, with help from his wife, Jennifer, “The tree goes up Nov. 1,” he says with a laugh. “And just because of social shaming, we don’t put our decorations out in the yard until Dec. 1. We have so many movies that we watch, it’s hard to get through if we don’t start in November. I make my kids watch them all. I make my kids watch three versions of A Christmas Carol; that’s my favorite … the Patrick Stewart version … the animated Jim Carrey version … the old-school black-and-white one. We’ve got multiple Grinches that we have to watch.”

Books are a big deal at the Elkins home, too.

“We’re readers — we’re big readers,” he says. “I feel like reading and creativity are probably the two best gifts you can give your children.”

Beyond Elkins’ own creativity — rhyming “brown leather chair” and “red underwear” — the colorful book showcases charming illustrations by Ag Jatkowska, an artist enlisted by the publisher.

“I’m absolutely over the moon with what she did with it,” Elkins says.

So is his daughter. Isabelle is particularly pleased with Santa’s ever-present pe, who appears with each turn of a page.

Elkins says, “I hate admitting it. I was raised with dogs, but we’re a cat family. The fact that there’s a cat on the cover and in the book, that’s one of the things my daughter loved.”

The book is published by Christian media company Zondervan under the Zonderkidz imprint.

The message of A Christmas Gift for Santa, Elkins says, is “the concept of giving back, thinking of other people.” It’s a message for his children too.

He says, “We’re a very blessed family by all measures, and I want my kids to understand that.”

A Christmas Gift for Santa: A Bedtime Book (Zonderkidz), comes in hardback and digital versions and is available at most bookstores.