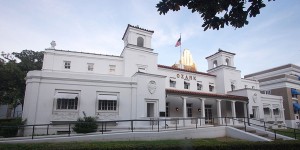 The National Park Service (NPS) began a year-long commemoration of its centennial anniversary last month at the service’s more than 400 natural areas, historic monuments and other sites across the U.S.

Arkansas’ NPS sites are joining the celebration of the NPS, which was created on Aug. 25, 1916. The state is home to eight NPS sites, which together draw about 2.9 million visitors annually. Arkansas is also home to one of the National Park Service’s official ambassadors for the centennial, Enimini Ekong, chief of interpretation and education at the Central High School National Historic Site in Little Rock. Ekong is one of only five park rangers out of the 28,000 employees in the NPS to be given this designation. As a part of his duties, Ekong will travel the country promoting Arkansas’ NPS sites and all national parks at several events including the Super Bowl on Feb. 7. He is determined to help Arkansans better understand the treasures that lie in their own backyards.

“Our goal is to create the next generation of supporters, visitors and advocates of our parks for the next 100 years,” says Ekong. 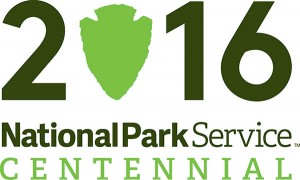 In 1983, Wallace Stegner, a writer and historian, wrote in an essay that America’s national parks were “the best idea we ever had. Absolutely American, absolutely democratic, they reflect us at our best rather than our worst.”

The foundation for the national park system, if not the idea itself, was laid in 1832 when President Andrew Jackson set aside four sections of land in what is now Hot Springs National Park in Arkansas. At the time, it was called the Hot Springs Reservation and the purpose of setting the land aside was to protect the hot springs, which were valued for their purported health benefits, and to help protect the area against unrestrained commercial development, according to the book “The National Parks: America’s Best Idea,” by Dayton Duncan and Ken Burns. The book is the companion piece to Burns’ popular PBS documentary of the same name.

In 1872, the nation’s first national park was created to protect 2.2 million acres of the magnificent geyser-filled Yellowstone area in Wyoming. Next came the Mackinac National Park at Lake Huron in Michigan followed by Yosemite National Park in 1906, which had been under California control since 1864. In response to the call to provide an agency to specifically manage the parks, President Woodrow Wilson on Aug. 25, 1916, signed a law creating the National Park Service.

The centennial activities are the first step in building this next generation of supporters, Ekong says. Many events across the state are already scheduled, with more to come. One such event is an “Iron Ranger” competition. According to the www.ironranger2016.org website, visitors who register may choose to hike, bike, paddle, walk, run or roll 100 miles in any of the national parks in Arkansas. Those who complete the 100 miles will receive a certificate and commemorative patch. To register, visit www.ironranger2016.org.

Long revered for its “healing waters,” Arkansas’ hot springs, located in the Zig Zag Mountains of the Ouachita

Mountain range, were set aside in 1832 by a federal act to preserve them for use by the public, making it the nation’s first legally protected natural area. In 1921, what had been known as the Hot Springs Reservation, became an official national park complete with the historic Bathhouse Row. Today, visitors can still get a thermal bath in the 4,000-year-old spring water of what has been dubbed a “city within a park,” as well as hike the scenic trails of the park and camp at the Gulpha Gorge campground. The restored Fordyce Bathhouse is a museum of the bathing industry, which was in its prime from the late 1800s through World War II. It also houses the park’s visitor center. visit www.nps.gov/hosp 501-623-2824.

Located at the site of the first European settlement in the lower Mississippi Valley region, Arkansas Post was designated a national memorial in 1960. Henri de Tonti, a French officer, established a trading post here in

1686 where the French traded goods with the Quapaw tribe for beaver furs. The land became part of the United States during the Louisiana Purchase of 1803. By 1819, the post was a thriving river port and was capital of Arkansas Territory until 1821 when it moved to Little Rock. Located about 16 miles north of Dumas, there is a visitor center and museum chronicling the site’s history. www.nps.gov/arpo; 870-548-2207. 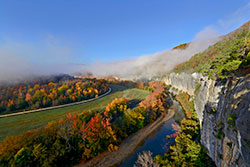 Established in 1972 as the nation’s first national river, the Buffalo National River flows unimpeded for 135 miles and is one of the few remaining undammed rivers in the lower 48 states. The river, with its rapids, quiet pools and massive bluffs, cuts through the scenic Ozark Mountains down to the White River. Canoeing, kayaking, hiking and camping are popular within the NPS area while local outfitters offer recreational equipment, cabins and other amenities. The Tyler Bend Visitor Center has exhibits and a film telling the Buffalo story. www.nps.gov/buff; 870-439-2502.

Fort Smith, established by U.S. soldiers on Christmas Day 1817 to help keep peace between five nearby 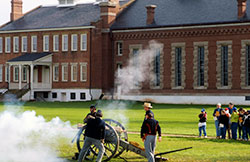 Native American tribes, was once the last bastion of civilization on the border of the Wild West. The National Historic Site’s stories include tribal relations, the Civil War and the Federal Court under Judge Isaac C. Parker. U.S. Deputy Marshals dispatched by the court pursued outlaws who came from all corners of the nation to hide out in the about 75,000 square miles of Indian Territory. Tour the grounds, Federal Courthouse, commissary, “Hell on the Border” jail, recreated gallows and ruins of the first fort for true tales of lawlessness and high adventure. www.nps.gov/fosm; 479-783-3961. 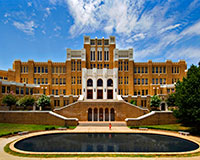 The only functioning high school located with the boundary of a national historic site, Little Rock Central High School is noted for the role it played in the desegregation of public schools in the United States. Known as “the Little Rock Nine,” nine black students began attending the formerly all-white Central High School in 1957. It was the most prominent national example of the implementation of the May 17, 1954, Supreme Court decision Brown v. Board of Education. A visitor center located near the school tells the story of Central High, and guided tours of the school are offered by reservation only. www.nps.gov/chsc; 501-374-1957.

On March 7-8, 1862, about 26,000 Union and Confederate troops met at Pea Ridge in northwest Arkansas in a battle for Missouri and the West. The 4,300-acre battlefield honors those who fought for their beliefs. Pea 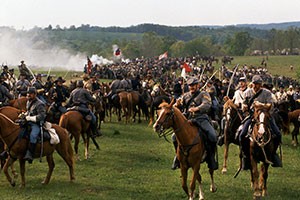 Ridge is the most intact Civil War battlefield in the United States, and is the largest single battle in Arkansas, a state where small, deadly skirmishes were countless. Interactive exhibits tell the stories of the battlefield strategy that preserved Missouri for the Union. Interpreters give voice to what’s known of the men who fought here. Look over the barrel of a cannon on the ridge during a tour to see the battlefield from a soldier’s point of view. www.nps.gov/peri; 479-451-8122.

Note: Because of a recent fire, the birthplace home is not offering tours until further notice. The visitor center is still open and park rangers are available to provide interpretive information.

In July 1992, William Jefferson Clinton made history, accepting the Democratic nomination for president of the United States and telling the delegates, “I still believe in a place called Hope.” Here, at 117 S. Hervey St. in Hope on Aug. 19, 1946, Virginia Blythe gave birth to her son, William Jefferson Blythe III. Named for the father who died before he was born, he grew up to become the 42nd president of the United States. Tour the modest South Arkansas homestead where the boy who would become president learned early lessons that would inform his decisions for years to come. www.nps.gov/wicl; 870-777-4455. 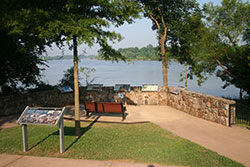 Historical markers identify the paths west taken by the thousands of Cherokee people forced by the U.S. government to abandon their homes in Georgia, Alabama and Tennessee to make the harrowing trek to Indian Territory in 1838-1839. Winding through nine states, this National Historic Trail includes trails, cemeteries, museums and historical markers of the journey from the Southeast to Oklahoma. The Arkansas portion is the last stretch of trail before the Cherokee reached the end. Stop at the Fort Smith Historic Site for the Trail of Tears overlook onto the Poteau and Arkansas rivers they crossed into Indian Territory. www.nps.gov/trte or call individual parks along the trail for
information.