From Armistice Day to Veterans Day

The poem “In Flanders‘ Fields,” written by John McCrae, a Canadian army doctor, is what made the poppy flower the most enduring symbol of World War I. Getty Images

The afternoon of Nov. 11, 1918, Sgt. Jasper Harrell Burke of Marion was more than 4,600 miles from home, working in an Army Expeditionary Forces mechanic’s shop near the front in France. At about 3 p.m., word came that Germany had signed the Armistice: the terrible fighting of World War I was over. Burke wrote his mother that, on hearing the news, “the boys” put aside their work and began beating hammers on a piece of iron, filling the air with joyful clanging. But at 5 p.m., the shops closed, and everyone could rejoice together. He described the scene:

“And then the real noise started. Men hollowering, whistling, singing, Cyrenes [sic]on autos shrieked, horns were blown, American engines whistled and the French engines with their pop-corn whistles blew, oh, and everything. There is a different atmosphere around here now.” 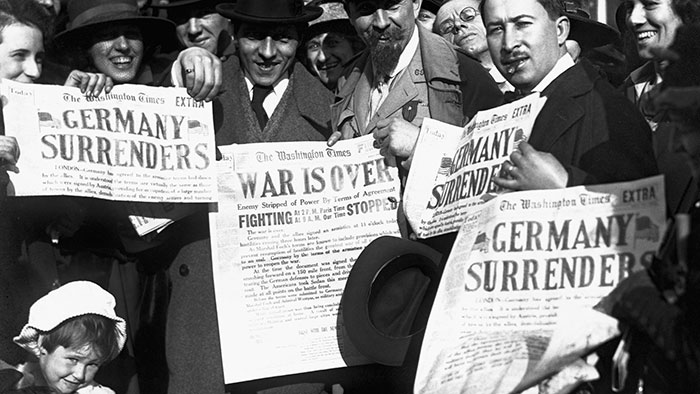 A century later and back in Arkansas, it’s difficult to fathom just how elated and relieved the world was that day as the news traveled across Europe and overseas. It’s an understandable lapse five generations later. We have no living memory of digging trenches deep underground behind enemy lines as international troops waged war 15 feet above our heads, or of thousands killed and wounded with new, poison gases and those new-fangled inventions, machine guns and tanks. We don’t recall deadly dogfights in primitive biplanes that filled the skies, or families back home struggling and sacrificing to support the troops with rationed food and resources. Few of us today knew any of the 20 million people who died in the Great War.

What we do have, to commemorate this perilous history and honor the generations of veterans who followed in service to our country, are two national holidays: Armistice Day and Veterans Day, both on Nov. 11. The 2018 Armistice Day is the centennial of the end of World War I’s deadly battles, and communities throughout the state are celebrating that 100th anniversary with special events large and small, many in concurrence with local Veterans Day celebrations.

Today, many people associate Veterans Day primarily with bank closings and mattress sales. At Arkansas Living, we believe it’s important to remember how we got to this place of freedom and prosperity, and why we honor our veterans with these national holidays. The more we understand, the more meaning and resonance the day will hold for each of us.

Armistice Day is not uniquely American; the world had been at war, so the world then celebrated the peace. The WWI armistice was signed at 11 a.m. on the 11th day of the 11th month. On that day (or often, the Sunday before) and at that hour, countries across the globe commemorate the historic occasion, internationally called Remembrance Day. The feeling was strong at the time that this was a once-in-a-lifetime war, something that the world hoped would never be surpassed in scope. Remembering would ensure that.

In the United States, President Woodrow Wilson addressed the American people on that first anniversary with these words:

A year ago today our enemies laid down their arms in accordance with an armistice which rendered them impotent to renew hostilities, and gave to the world an assured opportunity to reconstruct its shattered order and to work out in peace a new and juster set of international relations. The soldiers and people of the European Allies had fought and endured for more than four years to uphold the barrier of civilization against the aggressions of armed force. We ourselves had been in the conflict something more than a year and a half.

With splendid forgetfulness of mere personal concerns, we remodeled our industries, concentrated our financial resources, increased our agricultural output, and assembled a great army, so that at the last our power was a decisive factor in the victory. We were able to bring the vast resources, material and moral, of a great and free people to the assistance of our associates in Europe who had suffered and sacrificed without limit in the cause for which we fought.

Out of this victory there arose new possibilities of political freedom and economic concert. The war showed us the strength of great nations acting together for high purposes, and the victory of arms foretells the enduring conquests which can be made in peace when nations act justly and in furtherance of the common interests of men.

To us in America the reflections of Armistice Day will be filled with solemn pride in the heroism of those who died in the country’s service, and with gratitude for the victory, both because of the thing from which it has freed us and because of the opportunity it has given America to show her sympathy with peace and justice in the councils of nations.

Thus, Armistice Day began. Seven years later, President Calvin Coolidge issued a proclamation formally calling for the display of American flags on government buildings on Nov. 11 and “appropriate ceremonies” around the country (which had already been happening in many communities since 1919). In 1938, Congress made the date a legal holiday, officially called Armistice Day, honoring the end of what was hoped to be “The War to End All Wars.” It was intended to be a day of reflection on how the nations of the world can achieve and maintain peace.

Then, it happened again. 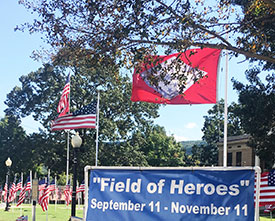 Dozens of American flags fly at the Cleburne County Courthouse in Heber Springs in honor of veterans and emergency personnel. photo by Sandra Byrd

In 1939, 21 years after the end of WWI and one year after Armistice Day became a national holiday in the U.S., Germany invaded Poland and the world returned to war. The bloody battles on land, sea and air on several continents took the world in their grasp and shook it for five years (not quite four years for U.S. involvement). This time, 60 million people died.

The world was never the same.

In the United States, the feeling was strong that Armistice Day was specifically for the first war. With the world in upheaval, still reeling and grieving from World War II, we needed an update.

In 1945, a WWII veteran from Alabama, Raymond Weeks, campaigned Dwight D. Eisenhower, then serving as Army Chief of Staff, to expand Armistice Day to include all veterans; a “Veterans Day” that went beyond Armistice Day. Eisenhower enthusiastically supported the idea, and Weeks led the first national Veterans Day ceremony in Birmingham, Alabama, in 1947. Eisenhower took his support of the day a step further in 1954 when, as president, he signed a bill making Veterans Day its own federal holiday.

Celebrated concurrently, Armistice Day and its offspring, Veterans Day, became part of the American calendar. Armistice Day specifically marks a day of remembrance of World War I, the advent of modern and global warfare. Veterans Day honors all veterans of the United States Armed Services, past and present, until the end of time.

In the United States, the Bells of Peace will ring across the land. Arkansas’ World War I Commission is leading the state’s participation in this ceremonial ringing, calling on people and organizations statewide to ring bells 11 times at 11 a.m. on Sunday, Nov. 11, to celebrate the end of World War I and remember the millions who fought, suffered and died.

A list of World War I commemoration events and exhibits, including Bells of Peace locations, is available at www.wwiarkansas.com/events. Many of the exhibits close on Armistice Day, so this is your last chance to see them.

“I am very proud of the work that the World War I Centennial Commemoration Committee has done over the past two years,” said Stacy Hurst, director of the Department of Arkansas Heritage. “From memorial trees planted in every county to exhibits and programming across the state, the committee has helped build a greater understanding of the heritage of the Great War. The Bells of Peace event, with bells tolling across the state at 11 a.m. on Nov. 11, will be a solemn and moving conclusion to the centennial observance.”