The Arkansas communities of Ozark and Oark are separated not just by an alphabet letter. There are 30-some mountainous miles between them, maybe 20 as the hornet — the Oark mascot — flies.
Still, Ozark, a city in Franklin County, and Oark, a considerably tinier unincorporated area in Johnson County, have their similarities.
Both regions are served by Arkansas Valley Electric Cooperative. Both embody small-town charm and pride. And both possess solid schools with excellent educators.
This year, Ozark High School teacher Tracy Lewis and Oark Elementary School teacher Sandra Allen were named Teachers of the Year by the Arkansas Rural Education Association. Nominations are vetted by the state’s 15 educational cooperatives, which submit finalists to the association for consideration; a panel selects two winners.
Lewis and Allen received crystal apple gifts and checks for $1,000 from the Electric Cooperatives of Arkansas, which have sponsored the awards since 2004.
Both also received a classroom visit during the second week of school from Arkansas Living magazine. 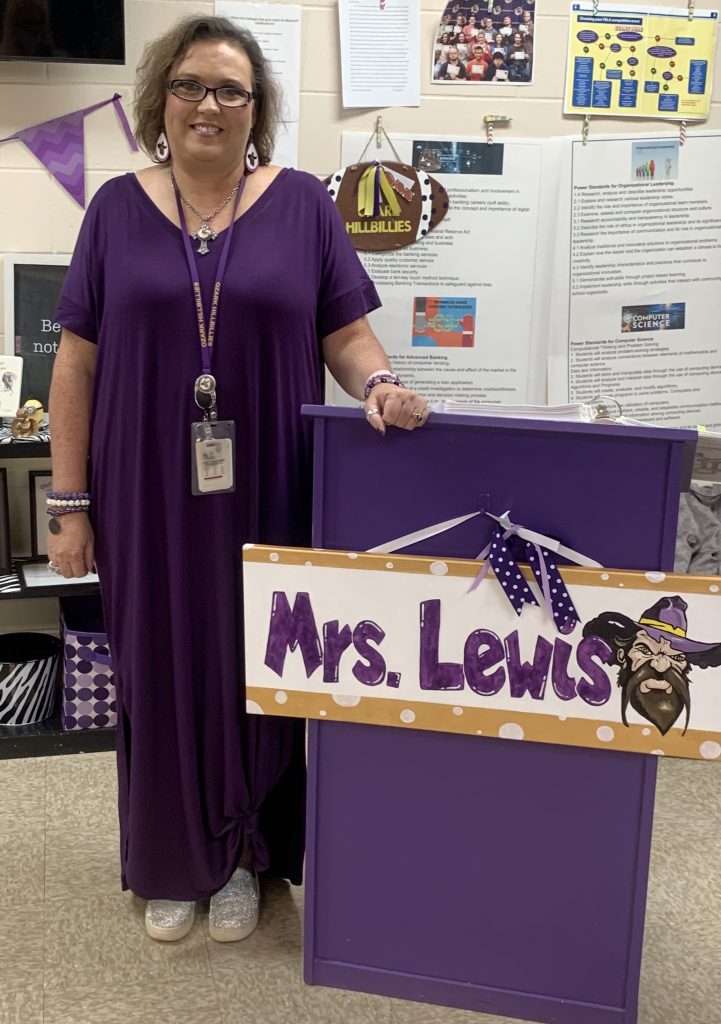 Tracy Lewis — Ozark High School, Ozark School District
Wearing Ozark High School purple from head to toe on the first Friday of football season, business teacher Tracy Lewis is the picture of “HPRD,” an acronym on campus mascot flags and in social media hashtags: “Hillbilly Pride Runs Deep.”
In her grape maxi dress, complemented by coordinating beaded bracelets and Hillbilly mascot accessories, including a lanyard, necklace and earrings, she has all she needs for the morning pep rally, except one thing — pep.
With emotion and exhaustion in her voice, she explains, pointing to a nearby desk, “Tuesday, my student who sits right here had a medical emergency.”
Days later, the student is fine and already back at school. Those teacher prayers have been granted, as has another Lewis shares with a giggle of relief, “God, can you please give me boring for the rest of the week?” Still, Lewis, who shed many “mama tears of worry” over the situation, admits she’s still shaken.
“I tell my kids all the time, ‘When you come into my class, you’re my kid,’” says Lewis, mother of a 24-year-old daughter. “‘You’re my kid forever. And I will treat you like my kid.’”
Originally Lewis’ teaching career began — and then quickly ended — with much younger kids.
The Gosnell native studied education at Arkansas State University in Jonesboro, during which, “They put me in with fourth graders to do my internship. … I thought, ‘Maybe this isn’t for me,’” she says. “So, I actually went into banking for 13 years.”
Eventually, she was ready for a change. Realizing that “my true love is kids,” Lewis began teaching at the high school level 12 years ago. After working as a substitute teacher for the Brinkley School District and at the Arkansas Juvenile Assessment and Treatment Center in Alexander, she taught business at Forrest City High School before relocating to Ozark in 2017. While she has ninth through 12th grade students, she teaches mostly juniors and seniors. Upon completion of Lewis’ college-level banking courses, students are eligible for paid internships at Bank OZK, where they’ll be able to apply knowledge like today’s lesson on the significance of nonverbal communication.
As for why she enjoys teaching teens, she says, “I think because they’re trying to find themselves.”
Her motivation of students goes far beyond inspirational quotes that adorn the walls of her chic classroom decorated with animal print and, of course, purple. (“If you are always trying to be normal, you will never know how amazing you can be” — Maya Angelou.)
Lewis says, “I push kids out of their comfort zone when they’re capable of doing something. If I know that you have it in you to do it, then I’m going to push you. It feels uncomfortable at the time.”
Like with the student at a previous school who was too self-conscious about her appearance to participate in a talent show. Lewis recalls telling her, “‘You’d be surprised at how many people love you and will support you up there. I’ll stay right there with you if you need me.’ And she did it!” With Lewis’ backing (“Sweetie, you’re absolutely beautiful”), she also entered a pageant and won.
She similarly encouraged a super-shy student at a previous school. “She never said a word,” Lewis says. “I’d make her speak in front of the class. ‘You have so much intelligence to share — don’t hide. You’ve got it.’ And now she’s a preacher!”
Speaking of preaching, Lewis personally practices the life lessons she shares with her students.
“I tell my students, ‘You don’t know it, but I have anxiety about getting up in front of people,” she says, adding with a laugh, “I’m a teacher, right? I’m not supposed to have anxiety, but I do!
“I have to push past it because my desire for you to learn is greater.” 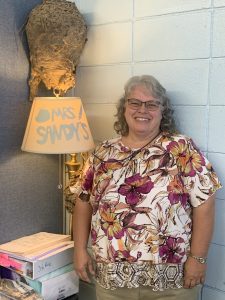 Rural Arkansas Teacher of the Year Sandra Allen poses next to hornet hives, a shout-out to Oark’s school mascot.

Sandra Allen — Oark School, Jasper School District
When third grade teacher Sandra Allen arrives at Oark Elementary School each morning, she doesn’t think of it as being at work.
“I feel like I’m home,” says the 30-year elementary educator, known to her kids as Mrs. Sandy. “We’re raising our kids together. We’re a family.”
It’s a family both figuratively and literally for Allen. After all, she — Sandra — attended this K-12 campus when she was a child, along with her identical twin sister — Saundra. The two continue to cause confusion to this day, as both teach on campus (with Saundra on the high school side). Allen’s brother, daughter, nieces and nephews grew up at this school, the same one that her father also attended. From Allen’s Teacher of the Year essay: “These memories motivate me every day to drive back through those gates bordered by the sturdy and picturesque rock wall that my dad helped build so many years ago.”
She’s adding to the legacy by using her award check to benefit the school (“I want to share it because we’re family, and we share”). She purchased an ice machine and goody bags for the staff, and playground amenities for the students.
As a young child attending school, Allen — who coordinates the local 4-H club, holds a seat on the County Fair Board and supports the FFA (sister Saundra is the adviser) — didn’t imagine she’d one day be teaching young minds multiplication like she’s doing on this afternoon on an electric smart board. She didn’t know she’d be in front of a classroom, one with mounted hornet hives (a nod to the school mascot) and a shelf of stuffed animals surrounding her framed Teacher of the Year certificate.
“I love animals,” she says. “We raised Charolais cows growing up, and broilers and hogs. We’d been immersed in the family farm. So, I thought I’d probably go somewhere toward agriculture. And I still do with the kids a lot of agriculture-based [lessons], because that’s where a lot of my passion comes from. But I don’t think I thought of teaching until later in high school.”
While earning her degree at the University of the Ozarks, Allen planned to become a high school math teacher, then changed her focus to elementary education.
“I thought I never wanted to teach below fourth grade,” she says, adding that her first job at a Head Start center changed that. “I fell in love with those babies.”
While she has taught kindergarten through fourth grade, she says teaching third graders is especially rewarding. “This third grade group, they still have that innate desire to please. They want to please you,” she says. Which is why, perhaps, the writer is generously gifted with a little girl’s coloring page of Narwhal, the whale from the children’s book series.
“You really feel like you are the mama figure still with them,” Allen says. “They crave that. They still want that.” And they still need that. When a child who leaves for early dismissal stumbles on the sidewalk, it’s Allen to the rescue with comfort and a bandage from her well-stocked stash.
She continues, “But then on the other hand, the world is their oyster. And they’re curious, and they want to learn. … And this age group right here is where you swap over from learning to read to reading to learn. You get the best of both worlds.”
When her students look back on their school days, Allen says, “I just hope they remember me as someone who advocated for them and hopefully instilled in them learning and curiosity.”
As a longtime teacher in a tiny community, Allen sees former classmates and students regularly. And she has taught multiple generations of the same families.
As for her classmates, she says, “I’m teaching their grandbabies now!”