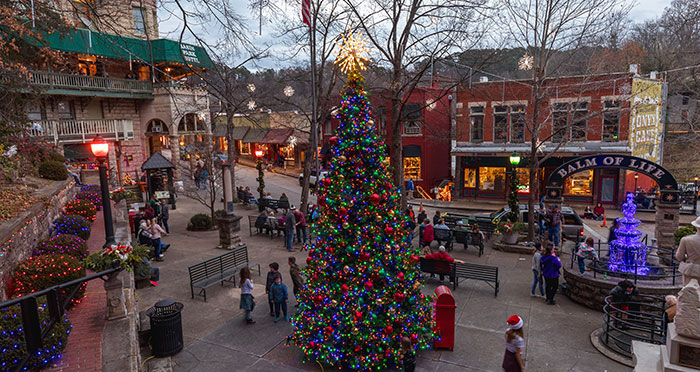 This December, wrap yourself in Christmas magic in Eureka Springs. Tucked in the Ozark hills, this tourist town has become a holiday destination.

“We have worked very hard to extend the season,” says Bill Ott, director of marketing and communications for the Crescent Hotel. “Everything used to close when the Passion Play was over, but now we stay busy into mid-December, and some families come right up to Christmas.”

Visit once and you’ll understand why.

People flock to the Crescent Hotel to see the “Christmas Forest” on the east lawn. 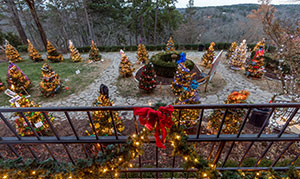 The Crescent Hotel’s Christmas Forest is a festive fundraiser for nonprofit groups.

evergreens and decorate them, often to represent their missions. Last year, when Arkansas Living visited the garden of glowing shrubs, the Nature Conservatory’s tree was graced with butterflies and birds, including cardinals. The Carroll County Music Group decorated one with music notes and instrument ornaments. Camp No Limits, a camping experience for children without limbs, was a vision in red, white and blue, with figures of superheroes tucked in the greenery.

There’s a tree lighting ceremony at dusk on Dec. 7, to illuminate the forest, which features more than 30 entries.

Visitors stroll through the shimmering lights, donating $1 to vote for their favorite entry; the money goes to the 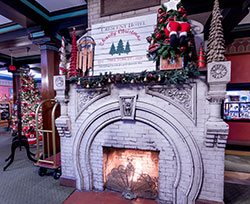 A roaring fireplace warms the Christmas crowd in the Crescent’s lobby.

nonprofit. Last year netted $10,270 for charity, and more than $38,000 has been raised in the past decade.“Sometimes money really does grow on trees,” Ott says. “It’s a real neat experience and does good for the community.”

Last December, Dia and Aaron Robinson, 27, of Little Rock, stumbled upon the forest. They were visiting Eureka Springs for the first time to visit The Great Passion Play premises.

During the holidays, the Passion Play has a light display with hundreds of outdoor Christmas trees, along with the anchor of the 67-foot Christ of the Ozarks statue.

Aaron says they popped into the Crescent because it’s famous for being “haunted,” but they were taken aback

by the festive décor.“It has a lot of Christmassy stuff. It’s so pretty,” Dia says.

At the historic hotel, balconies are outlined in white lights, while giant snowflakes are suspended above and ornaments of various sizes dangle from the ceiling. Nutcrackers guard the front entrance; a Santa statue is in the lobby along with a grand Christmas tree. The merriment is everywhere.

But that is just the beginning of holiday cheer in Eureka Springs.

The festivities are in full swing Dec. 5-8.

Some traditions have been going strong for more than 50 years, such as the Annual Silver Tea, held the first 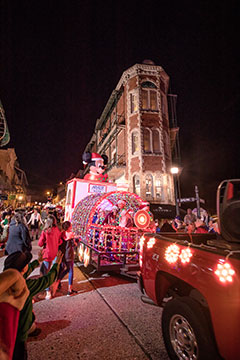 Thursday in December (Dec. 5). Members of St. James Episcopal Church dress in Victorian garb and serve high tea on silver trays and elegant china in the Crystal Ballroom of the Crescent Hotel.

Admission is by donation, and the annual tea raises money for Carroll County nonprofits.

“This is one of those events where the entire town turns out,” Ott says. “And let me tell you, you better get there early if you want to get a cucumber sandwich.”

On Dec. 6, the annual Eureka Springs Chamber of Commerce Christmas Parade of Lights takes place from 6-7 p.m. Spectators line the streets while glowing floats snake by along with marching bands and local legends like June Hegedus, 86, and June Owens, 93.

These grandmothers are known as “the June Bugs of Eureka.”

“We are the oldest ones in the parade, and we go to all the parties,” Hegedus says with a chuckle. Hegedus and 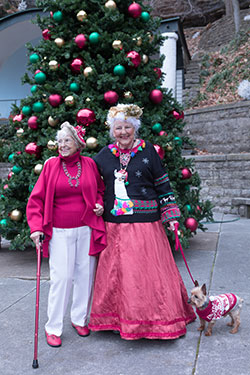 June Owens and June Hegedus — the “June Bugs of Eureka Springs” — are parade- and party-ready.

her husband were living in California when she passed through Eureka Springs in 2002 to visit a cousin.

She says, “The hair stood up on our arms, and it was like a spiritual awakening. … It was like, ‘We belong here.’ The second day, we bought land.”

Christmas is a special time, Hegedus says: “It gets absolutely packed. They have all kinds of things going on at the Crescent Hotel. Then all the shops downtown have Christmas windows with living models in the window. It’s beautiful.”

On Dec. 7, the Eureka Springs Preservation Society hosts the 40th annual Christmas Tour of Homes from 3-8 p.m. During this special event, homeowners open their ornate, spectacularly decorated Victorian homes. There are 12 stops on this self-guided tour.

“We broke every record last year,” says Dee Bright, president of the preservation society. “We had more than 1,300 people. It puts most people in the holiday spirit.” 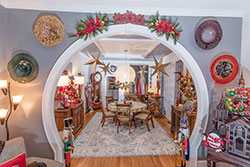 Eureka Springs’ many historic homes go all out for Christmas.

people around. Homeowners dress in period costumes and share the history of their home.

Karen Kerr Miller of Ozark, Missouri, attended the homes tour for the first time last year. Her grandfather was from outside Eureka Springs, so she grew up coming to the area.

“It’s so much fun getting to go inside the houses I have admired for all these years and see them in their holiday finery,” Miller says. “These people know the history of their homes. One of the houses we visited, the previous owners knew my grandparents, and I had been in that house as a kid. I can’t wait for 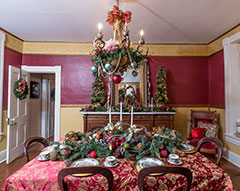 Yuletide elegance awaits visitors to Penn Castle, a Victorian mansion on the Christmas Tour of Homes.

Following Saturday night’s homes tour, the Christmas Forest is lit at the Crescent Hotel. Sunday at the hotel, there’s brunch with Santa, and throughout the week, there’s holiday music with school choirs singing, Ott says. 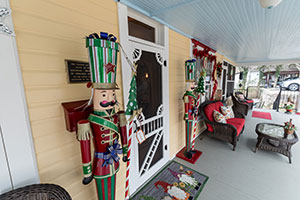 Nutcrackers greet guests at Red Bud Manor, a Eureka Springs bed-and-breakfast that is one of the 12 buildings included in the self-guided Christmas Tour of Homes.

antiques, homemade clothes, gourmet foods and kitchen items, to a plethora of works from local artists. It’s a great place to snag a unique gift.

Bright says the Eureka Springs downtown is the only entire downtown to be listed on the National Register of Historic Places.

The shop windows are decorated, often outlined in white lights. And from 5-8 p.m., on Dec. 14, there’s a Night of Merry Making, which includes caroling downtown and a Christmas market in Basin Spring Park with Santa and living windows where real models grace some of the downtown shop windows.

Also that night is A Night of 1,000 Santas, which includes a crawl and scavenger hunt downtown. Participants dress up as Santa, take selfies all over the downtown, and compete in a scavenger hunt, says Jackie Wolven, executive director of Main Street Eureka Springs.

The event is a hoot, and it’s increasingly popular with girlfriends who come for a gals getaway, merriment and shopping, Wolven says.

So, whether you want to see a parade, tour a historic home, visit Christ of the Ozarks or get silly dressing as Santa, a Eureka Springs Christmas is a must.