Rockabilly pioneer Sleepy LaBeef has devoted fans and friends, and they demonstrated that in full force at a benefit concert last month at Ward in Lonoke County.

LaBeef, a native of Smackover who now lives in Springdale, and his wife, Linda, have recently been battling health issues. For Linda, it was pancreatic cancer, and for Sleepy, 81, it’s congestive heart failure and its complications, which have prevented him from working regularly, something he had done for more than 60 years.

His musician friends, many of them rockabilly pioneers from the early days of Sam Phillips’ Memphis-based Sun Studios, banded together on March 19 for the concert. The show, which was open to the public, was organized and hosted by fellow Sun musicians Sonny Burgess and the Pacers at Ward Country Music Hall.

The owner of the dance hall, Leland Sullivan and his wife, Rita, donated the use of the 250-seat venue, and his family sold barbecue sandwiches, chips, candy, soft drinks and tea from the concessions stand to help offset the costs of donating the building for the afternoon.

“The Pacers have been performing here regularly for seven years,” said Sullivan, who lives in Cabot. “All the musicians here have donated their time, so donating the venue was the least I could do.”

The benefit was emceed by Little Rock musician “Big” John Miller. The list of performers were Burgess and the Pacers; saxophonist Ace Cannon and his band; Johnny Cash’s longtime drummer W.S. Holland and his band; Carl Mann and Jason D. Williams. The concert concluded with Sleepy taking the stage.

“The Pacers called,” said Cannon, 83, who currently resides in Calhoun, Miss. “And we always show up for our friends. I’ve known Sleepy since the ‘50s and the last show I saw him at was the rockabilly festival in Helena in May of 2013.”

“When I heard what was happening here with my friend Sleepy I said ‘OK, Let’s go!,’” said Holland, 82, who lives in Jackson, Tenn.

Williams, a pianist and singer from El Dorado known for his flamboyant flair recalling Jerry Lee Lewis, credits Sleepy and his contemporaries as serving as his professional mentors.

“I love all these guys,” said Williams, who began his career working as Sleepy’s keyboard player after meeting him at an El Dorado truck stop when Williams was 14. “If it wouldn’t be for them, I would not be here today.”

All of the money from tickets, sold at the door for $20 each, went directly to the LaBeefs.

“We are hoping for a full house and to make Sleepy some money,” said Bobby Crafford, 81, the longtime drummer with Burgess and the Pacers. The early Sun Records recording artists, which organized the fundraiser, had earlier held a similar one for the widow of the late Billy Lee Riley in Newport to help his family with bills.

In addition to the musical offerings, the benefit featured a silent auction with items ranging from nearly a dozen homemade cakes to rockabilly-related memorabilia, records and CDs. A bright yellow metal Sun Records logo sign, autographed by all the musicians who performed, was sold to Bill Eginton, who owns Arkansas Record & CD Exchange of North Little Rock, for $100.

“I bought one of the coconut cakes,” said Jennie Sue Guess of Cabot. “I make a mean carrot cake, and I’m not that crazy about coconut, but I wanted to support the cause.”

When Pat Bell of Sulphur Springs read in the newspaper that Ace Cannon was performing, he and his wife, Karon, made plans to attend.

“I played tenor sax in high school, and he was one of my boyhood idols,” Bell said. “When I saw his name, I just had to go and hear him and lo and behold, I also got to say hello to him and shake his hand.”

He also found the benefit to be inspiring. Bell added, “Musicians do stick together and take care of one another. It was great to see that in action.”

Many others attending were also there to support the couple and when LaBeef took the stage to perform at the concert’s conclusion, Crafford presented him with two fistfuls of collected cash totaling more than $5,000. Meanwhile, an earlier online fundraising drive created by Nashville musician, songwriter, and producer Dave Pomeroy had raised more than $10,000 for the LaBeefs.

As for the couple’s health, Linda says she is currently cancer free. In an effort to improve his health, Sleepy has lost more than 100 pounds.

Sleepy was born the youngest of 10 children and was raised on a melon farm. Originally named Thomas Paulsley LaBeff, he got his nickname “Sleepy” when he was in the first grade because of “his heavy-lidded eyes that made him look only half awake,” according to the online “Encyclopedia of Arkansas History and Culture.” He later changed the spelling of his last name to LaBeef.

He loved music from an early age and at 18 he moved to Houston where he began singing on local radio, as well as doing live performances as part of such shows as the Houston Jamboree and Louisiana Hayride.

Known as the “Human Jukebox,” Sleepy has entertained audiences for more than six decades with his vast knowledge of songs in virtually every genre of popular music. He has performed all over the world and recorded countless albums.

As for the concert itself, Burgess and the Pacers kicked off the afternoon’s program. Their nearly one-hour set was highlighted by such tunes as “Ain’t Got No Home,” “Mustang Sally,” “Pledging My Love” and “Red Headed Woman.”

Cannon took the stage backed by only keyboards and drums. He opened with “Green Onions.” His saxophone skills shined on “Tuff,” “Cotton Fields” and “Blue Eyes Crying in the Rain.” He closed his set with Louis Armstrong’s “What a Wonderful World.”

The W.S. Holland Band provided a set of songs and stories. Holland talked about his early days as a musician, working with Cash and recalling his friendship with Sleepy. His set featured Cash’s recitation, “Ragged Old Flag.”

Mann, who recorded rockabilly, pop and country throughout his career, interacted with the crowd well. In addition to covering Elvis Presley’s “That’s Alright Mama” and George Jones’ “He Stopped Loving Her Today,” Mann got a big ovation for his 1959 hit “Mona Lisa.”

It was obvious the crowd had been anticipating Williams to take the stage. The high-energy pianist dished out some hard-driving rockabilly, as well as a thrilling classical piece. From “Tore Up” to “Breathless,” Williams was a huge audience favorite. 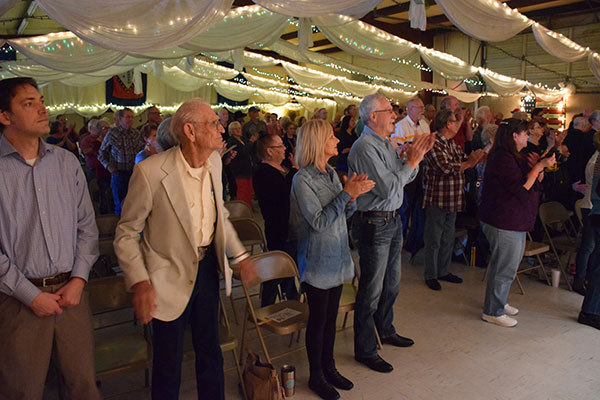 To a standing ovation, Sleepy took the stage. His distinctive vocals and guitar licks were in full blossom as he performed such songs as “Big Boss Man,” “Hello Josephine” and “Bo Diddley.”

The event concluded with several performing on stage with him singing the old Albert E. Brumley gospel classic, “I’ll Fly Away.”

Before exiting the stage, Sleepy expressed his thanks to all those attending, “We appreciate you all and thank you all for all of your support and your prayers.”