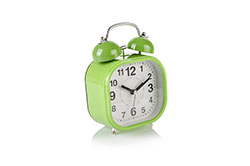 Until the 1950s, scientists viewed sleep as an inactive state — a passive “shutdown” of the brain. But we know now that sleep is as important to our health as food and water, says the National Institute of Neurological Disorders and Stroke.

According to the National Center on Sleep Disorders Research, approximately 70 million Americans report having sleep problems. And of those people, nearly 60 percent have a chronic sleep disorder like obstructive sleep apnea or restless legs syndrome. 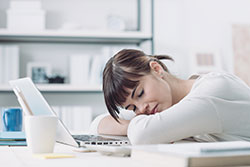 Consistently feeling sleepy during the day can signal a sleep disorder. photo -bigstock.com

Each year, sleep deprivation and sleep disorders cost the U.S. nearly $16 billion in health care — and that doesn’t include the many hidden and hard-to-calculate costs created by other factors like lost work time, “drowsy driving” car accidents or related diseases.

How much is enough?

Research shows that not regularly getting enough sleep (seven to eight hours per night for adults) is associated with higher incidences of a variety of physical and mental health problems, including hypertension (high blood pressure), diabetes, obesity, stroke and heart disease, and depression. These problems lead in turn to higher death rates for people with chronic “sleep debt.”

Young people require even more sleep each day for normal development and function: nine to 10 hours for teens, at least 10 hours for school-aged children, 11 to 12 hours for preschoolers and up to 16 to 20 hours for infants. Children often show fatigue through hyperactivity and inattention instead of by acting sleepy, making them vulnerable to misdiagnosis with behavioral disorders.

To get your sleep back on track, try the following tips:

Sleepiness leads to slower thinking and reaction time and reduced attention levels, all of which can negatively affect performance-based activities like driving. In fact, driving with sleep debt can be as dangerous as driving drunk.

The AAA Foundation for Traffic Safety estimates that drowsy driving is responsible for an average of 328,000 crashes annually, including 109,000 crashes resulting in injury and 6,400 crashes in which someone was killed. More than one-fifth of all fatal crashes involve a drowsy driver — a preventable statistic. People with six hours or less of sleep the previous night, or people who have been awake for 20 or more hours, should consider themselves at risk and either avoid driving altogether or take precautions like traveling with a passenger or pulling over for a power nap.

Visit your doctor if you consistently feel sleepy during the day, take frequent naps, or fall asleep unexpectedly or at inappropriate times. Taking more than 30 minutes to fall asleep, awakening frequently or too early, feeling unable to move when you first wake up and not feeling rested even after seven to eight hours of sleep can also signal a disorder. If your bed partner says you snore loudly, snort, gasp or make choking sounds while you sleep, a trip to the doctor is definitely in order.

You can find a current list of American Board of Sleep Medicine-certified sleep specialists on that organization’s website, www.absm.org, and a location-based list of sleep centers accredited by the American Academy of Sleep Medicine at aasmnet.org.

A.D. Lively is a Little Rock-based writer specializing in health and wellness.