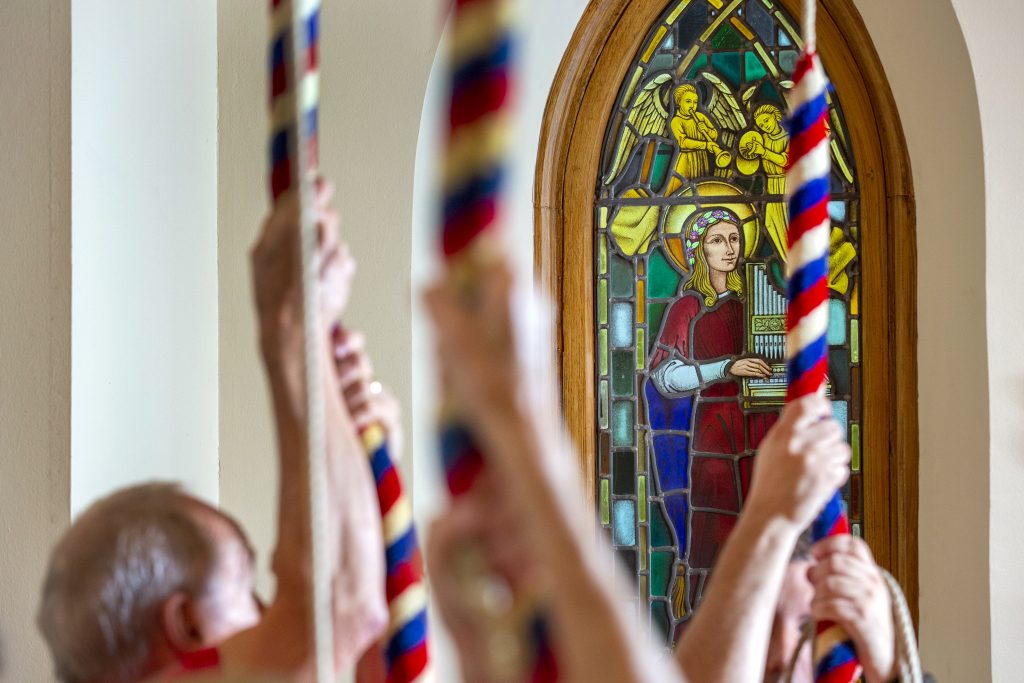 Trinity Episcopal Cathedral sits tucked into a historic Little Rock neighborhood, surrounded by the grand homes of the city’s past. A picturesque campus, its brickwork and wrought iron beckon the visitor into a lush courtyard, while stately bronze plaques memorialize longtime members and their faithful families.

And from above, the sound of bells flutters out of a tower, dusting passersby and drifting on the street like fresh snow. The effect is at once commanding and embracing — pulling the faithful from their cars and, once inside, enveloping them in a cocoon of sound.

It’s a tradition that goes back centuries in the Episcopal Church, and more than 30 years here, played out for weddings, ordinations, holidays and run-of-the-mill Sundays throughout the year. 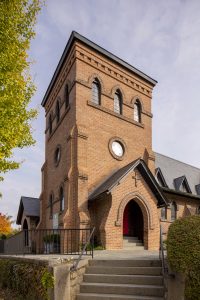 Karen E. Segrave | KES Photo
Trinity Episcopal Cathedral near downtown Little Rock is one of only two Churches in Arkansas with a bell tower.

“You hear people say, ‘I just love coming up to church and hearing the bells,’” says Tower Captain Mary Wilson. “A lot of times, they don’t hear them because you kind of just get used to them. But when we don’t ring, it’s noticeable, and they mention it to us. We used to take a month off in the summer, and sometimes we get thin because people go on vacations and whatnot. People will notice if you’re not ringing or haven’t rung for a period of time. So, we try to ring year-round.”

Wilson is one of the Trinity Cathedral Ringing Society, a group of church members who have learned the fine art of the bells through regular rehearsals. Gathering in the bell tower’s ground floor chamber, they grasp one of eight ropes descending from holes cut in the ceiling. The ringers coordinate their bells in a given sequence called a method that is more pattern than hymn. 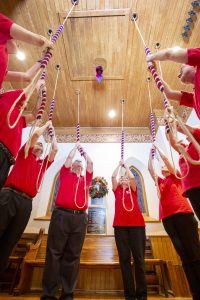 Watching the ringers in action yields a fascinating exercise in timing, not just with each other, but in relation to the bells themselves. The eight bells are heavy — 400 to 1,000 pounds each — and the ropes move fast, so ringing them takes precise handwork and concentration to maintain control and avoid injury. To a newcomer, a rehearsal is harrowing to watch, as it looks like grasping the rope in mid-peal would whisk the ringers off their feet or cause grievous injury. Which it can, so new Society members are trained carefully in how to keep the massive metal beasts in time and under control.

“It’s a distinct style of bell that’s upstairs,” says Ringing Master Scott Whitfield, who coordinates the rehearsals. “The bells are basically upside down. When we pull the rope, they turn and sound. Then when we pull again, they go back to where they were.

“It’s a coordinated effort. When all eight bells are ringing, you have to ring in time with all the other ringers.”

Change ringing, a form of church bells music that sounds in patterns as opposed to melodies, has its roots in England, and it’s still where you find 95% of the art form. In America, Whitfield estimates, there might be 100 churches that still feature it and only two in the state of Arkansas, the other being First Presbyterian Church in Texarkana.

Trinity Episcopal Cathedral, which was founded in Little Rock in 1884, wasn’t originally built for the kind of bells they have now. And when the decision was made to retrofit the tower for the setup in honor of the church’s centennial, it took some serious reengineering to pull it off.

“When they added the change bells in the ’80s, they had to reinforce the tower with steel beams because of the vibration of the bells,” Wilson says. “You can feel the sway, just like a bridge or a building will sway.” 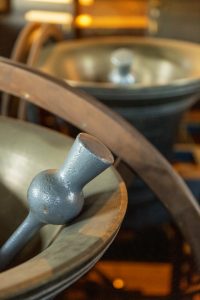 Karen E. Segrave | KES Photo
Each bell is made of bronze, but the clapper is made of cast iron.

The bells themselves — named Polk, Goldie, Floyd, Bishop, Dean, Charles, Major and General — were cast in London, England, by Whitechapel Bell Foundry (1570-2017), a company with a legendary pedigree, having cast bells in Westminster Abbey and Big Ben, as well as the Liberty Bell. 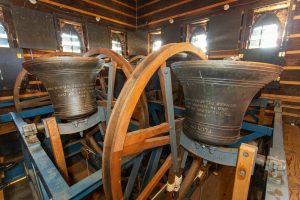 Karen E. Segrave | KES Photo
The bronze bells were named in honor or memory of people who were very important in the life of Trinity Cathedral

Once installed, a corps of ringers had to be recruited and trained, and today the Trinity Cathedral Ringing Society numbers about a dozen members, give or take.

“We have eight bells. We don’t have to have eight ringers, but we’d like to have a minimum of six to get a good sound,” Wilson says. “When you get down to three or four, you’re just three-blind-miceing it. I mean, we have done it with five; Scott is a musician, so he knows how to place us on bells, skipping certain bells to make a pleasing sound. But it sounds better when we have the full range.” 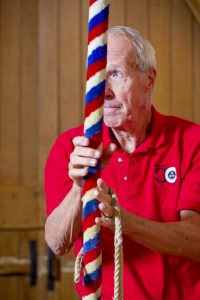 Karen E. Segrave | KES Photo
Dick Dearnley pulls on the “Sally,” which is the name given to the fluffy woolen part of a bell ringing rope.

For whom the bell tolls

Over time, the group’s skills have improved, such that they have even been called on by other churches to get a ringing program off the ground, as a plaque from a church in Louisiana attests. Ringing Society members are also steeped in the history and code of certain methods, depending on the occasion. For instance, during a funeral, the method tolls in a given pattern that announces traits about the deceased, dating back to times when bells were a news medium for the countryside.

Wilson adds, “Then, you’re going to ring their entire age. If someone is 90 when they died, you ring it 90 times, one every 15 seconds. So, that takes some willpower.”

Unlike other bell species, which play tunes and therefore can differentiate joyful occasions from the somber, change bells differ only in the pattern within the method. Therefore, Easter Sunday sounds very much like a wedding to most people and Christmas Day like a more pedestrian Sunday in August. But all are made richer for the Society and their well-honed skills. 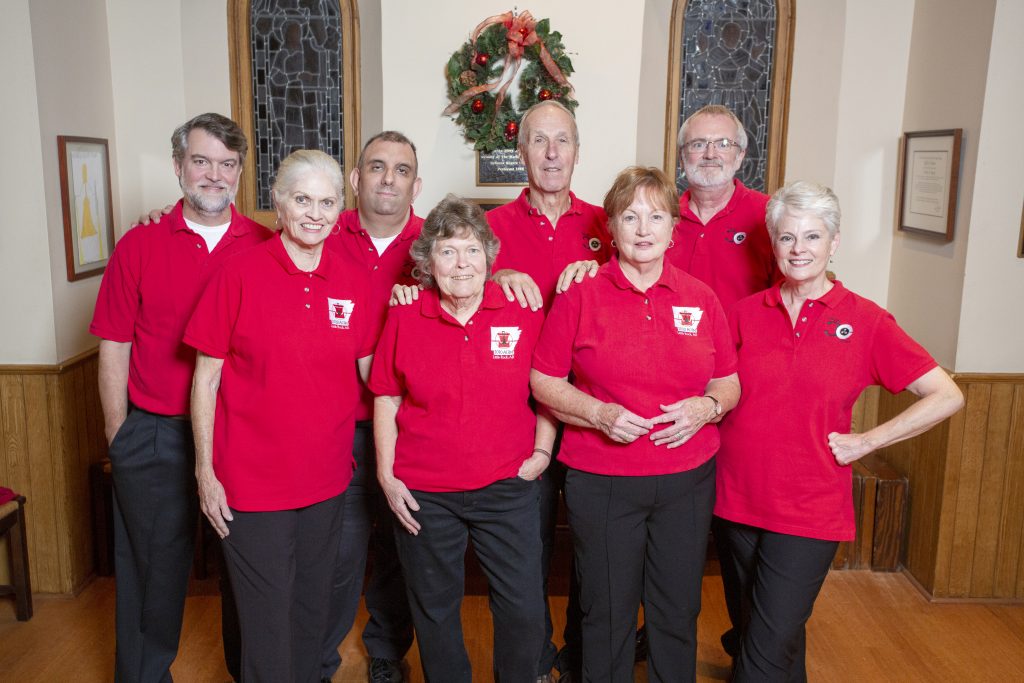