Valentine envelopes receive a special Romance cancellation that has varied over the years.

A tiny Arkansas post office is also among the state’s busiest during the first half of February. It’s a love affair that brings a flood of Valentine’s Day cards to a rural White County community.

The magic word behind this annual surge of mail is “Romance.” That name, sweet as sugar, is inspiration for the special cancellation applied by hand each winter to thousands of cards from across the United States and even from abroad. Another flurry of requests for Romance stamping arrives from brides-to-be when wedding season starts in the spring.

There are at least a couple of ideas about the heartwarming name’s origin. One is that it was coined by a 19th-century schoolteacher who thought the view from bluffs on Romance’s eastern side was especially romantic. A spicier notion suggests that a nearby spring was a rendezvous spot where courting couples exchanged romantic hugs and kisses.

Romance is Arkansas’ sole entry on the U.S. Postal Service’s online list of 37 nationwide postmarks that evoke Valentine’s Day. The others run alphabetically from “Bliss” to “Venus.” Two are “Valentine,” and another is “Valentines.” There’s even Florida’s punderful “Kissimmee.” 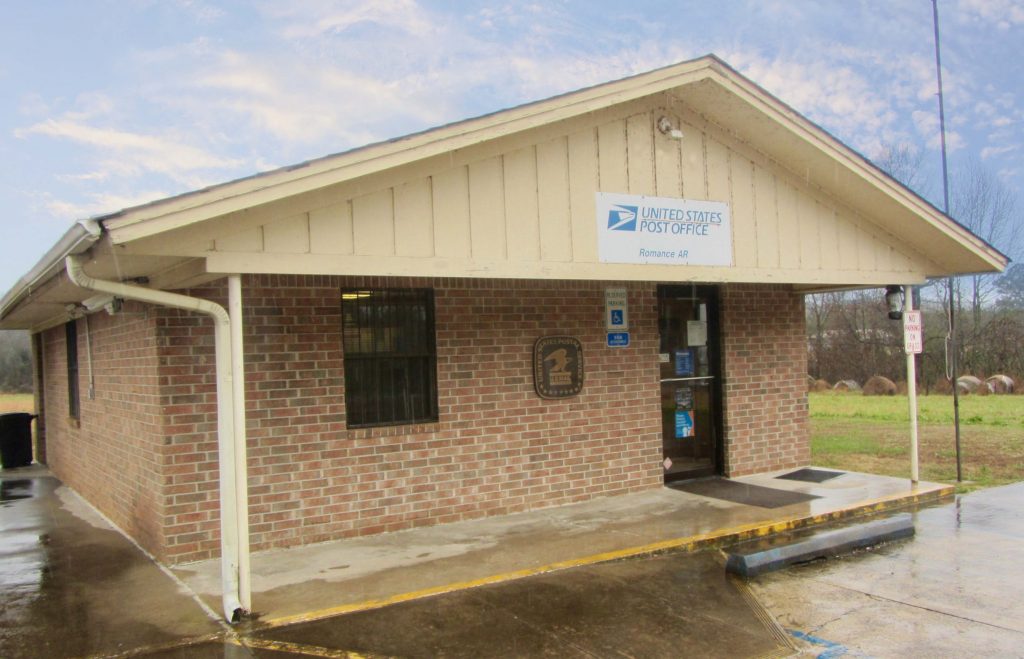 The small Romance Post Office is open mornings only from Monday through Saturday.

“I believe we’re the only town in the world named Romance, and that’s quite a distinction,” says John Parham, postmaster serving the office’s several hundred addresses. “So, we take a lot of pleasure in putting the Romance stamp on Valentine’s cards and wedding invitations.”

Romance’s stature as a love-linked post office got a big boost in 1990 when it was chosen by the U.S. Postal Service as the site for the initial issuing of that year’s “Love” stamp. Among the dignitaries attending the publicized ceremony was U.S. Sen. David Pryor of Arkansas.

“We’re still proud of that honor,” says Parham, who joined the postal service in 1996 and became postmaster in 2015 for Rose Bud, Romance and two other small White County offices. Testifying to that pride is a poster-size copy of the 25-cent stamp from 1990 still displayed on a wall behind the counter. It depicts two blue doves perched above a red heart. 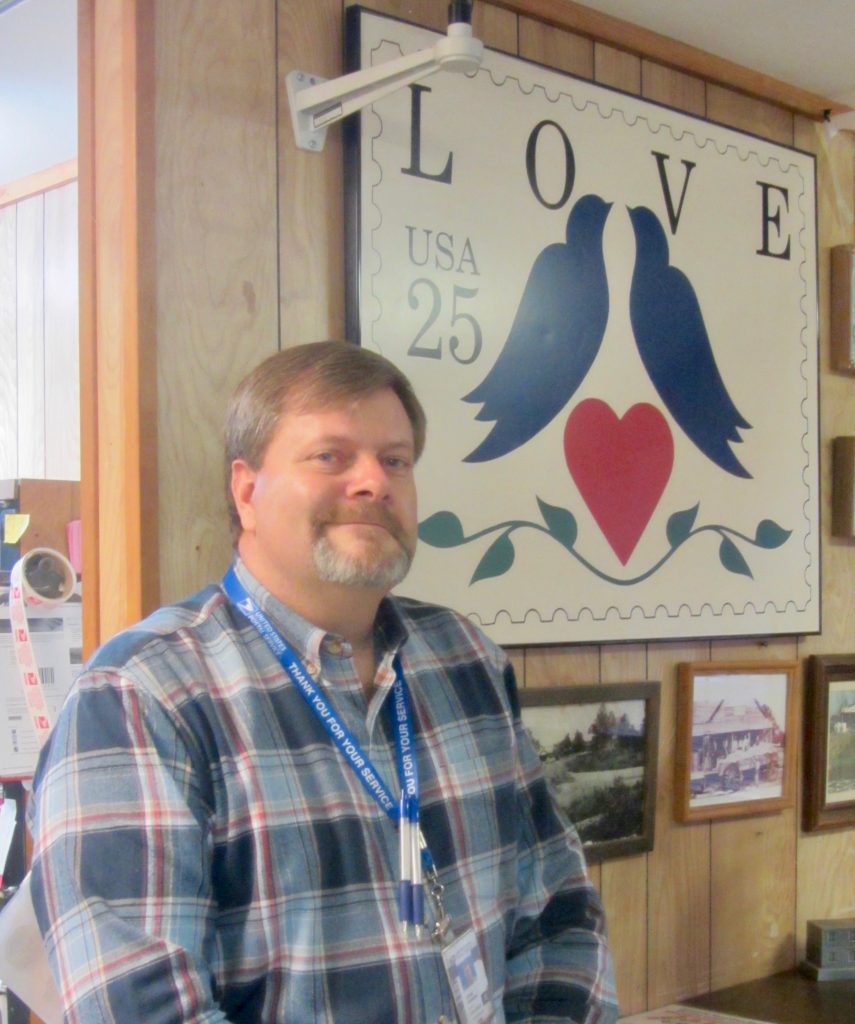 The 2022 “Love” stamp, on sale at post offices in sheets of 20, is actually a pair of similar designs. According to the postal service, both feature “three round, stylized blooms along the top, with smaller round blossoms in each of the lower corners. One background color is powder blue and the other is coral. Twisting vines holding small multi-petaled flowers form abstract heart shapes.”

“Romance is a perfect place to buy your ‘Love’ stamps,” Parham says. “Not only will your Valentine’s cards carry that loving image, but they’ll also have our Romance cancellation stamp. They’ll bring a smile to the faces of anyone who receives them.”

For the previous six years, a specially designed cancellation graced the cards. Created by Conway artist Jessica Kelley, the image showed a dove hovering toward an open mailbox labeled “Love Station.” The stamp also included the phrase, “Love is in the air.”

That stamp was applied to an estimated 12,000 Valentine’s Day cards in 2020, just before the COVID-19 pandemic took hold. The number dropped by about half in 2021 but has picked up substantially this year. 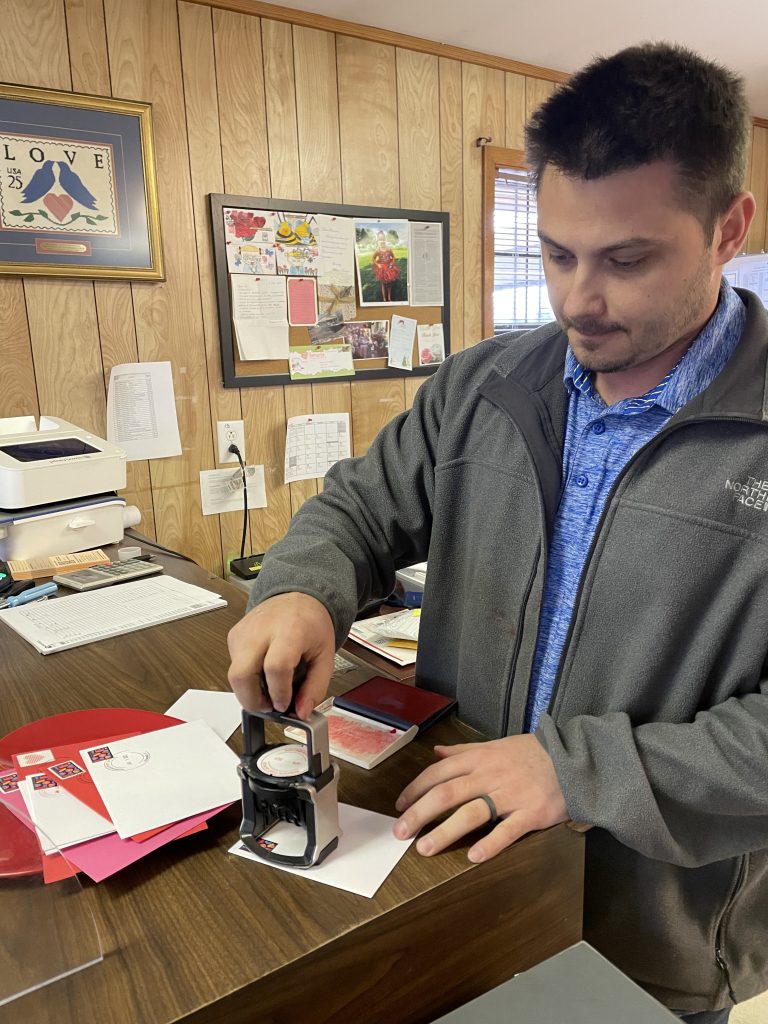 Meanwhile, Parham retired Kelley’s design in 2022 and switched to a smaller cancellation stamp. Circular and about the size of a thumbprint, it reads simply: “Romance Post Office” at the top and “Romance, AR 72136” at the bottom with the date in the middle.
Tacked on a post-office message board are whimsical drawings and messages of request or thanks from previous years. One was mailed in 2021 all the way from Japan. The sender, 84-year-old Shintarau Aoki, began with the greeting “Konnichiwa!” (“Hello!”)

Aoki wrote, “I am very interested in all kinds of postmarks. Would you do me a great favor?” Along with requesting a Romance cancellation, she sent along several U.S. stamps.

“That may be the farthest we’ve sent back our special stamp,” Parham says. “A lot of the requests come from near here, around White County. We’ve had visits from groups of day care kids to get cards stamped for their grandparents.” 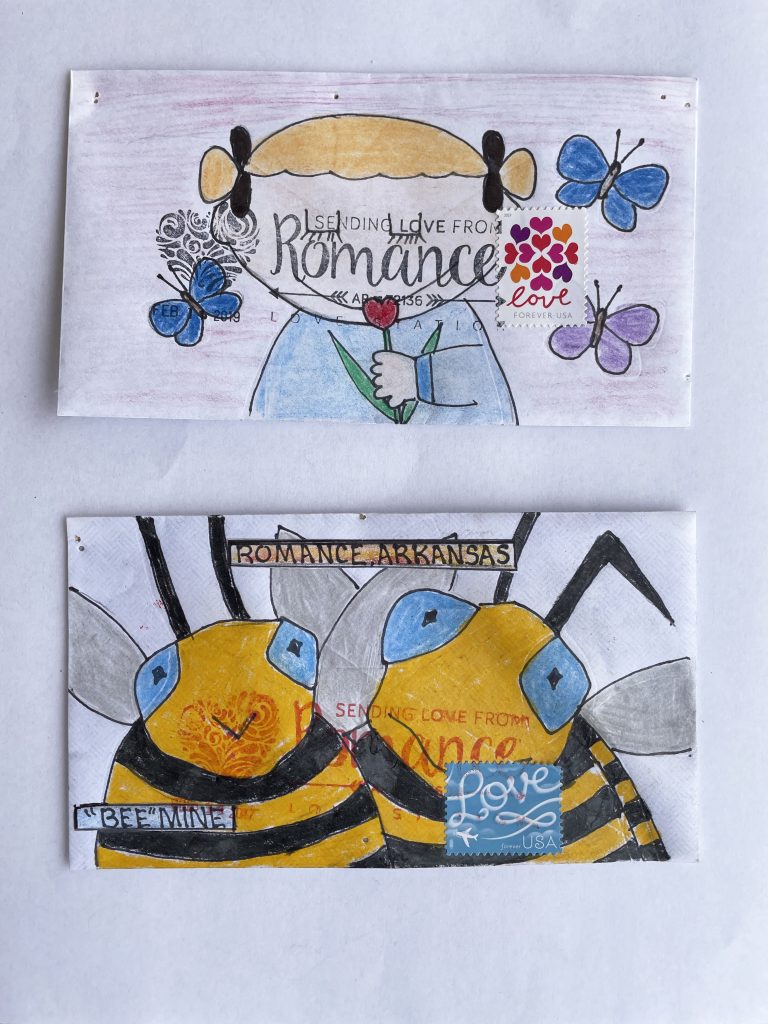 Youthful drawings are on display in the Romance Post Office.

The message board holds four Romance-themed cartoons drawn by youngsters. One shows a rose and hearts. Another, playing off a Valentine’s Day pun, depicts two colorful winged insects and a plea to “Bee Mine.” The two others portray girls sniffing a heart-shaped flower as butterflies flutter by.

Nearly a decade before he became Romance’s postmaster, Parham had his first encounter with the cancellation. He had it stamped in 2007 on the 200 or so wedding invitations sent by him and his wife-to-be, Kristen.

“A lot of people told us they thought the special stamping was neat,” he says. “It was a conversation piece at the reception. Now I send Kristen a Valentine each February with the Romance stamp. It’s a personal touch that has become a family tradition.”

If dropping off in person, the mailing should not be put in the office’s outdoor collection box. That mail is taken directly to Little Rock.

Cards intended for Romance cancellation should be placed in sealed envelopes bearing a first-class Forever stamp and mailed in a larger envelope to: