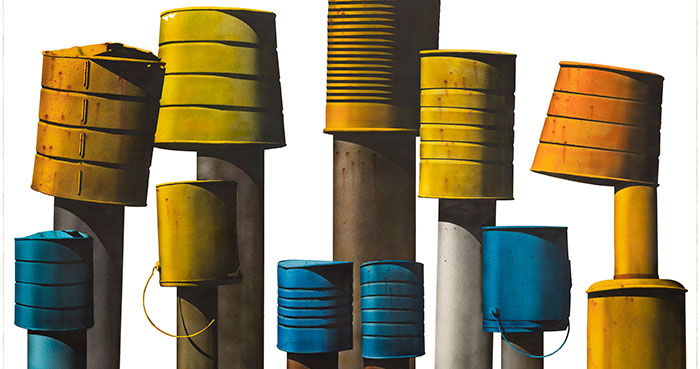 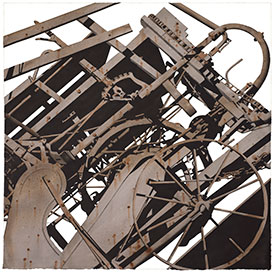 Once each year, renowned artist George Dombek opens his Goshen-based studio near Fayetteville to the public to showcase his work, including his latest creations. This year, his open studio will take place May 18-19 and May 25-27.

In October 2015, Arkansas Living featured Dombek in a cover story about his art, especially his barn project in which he painted a barn from each of Arkansas’ 75 counties. He still has a fascination with barns — he is restoring an 1880s barn on his property — but he is devoting most of his painting time these days to his “Ozark Portraits” series with subjects you might easily find in an old barn in the Ozarks: tin cans, vintage coffee pots, oil cans, rusted paint cans and wash pots.

Raised as a coal-miner’s son in the Arkansas River Valley town of Paris, Dombek, 74, has degrees in art and 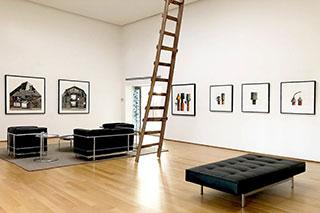 architecture. His primary medium is canvas and watercolor, but he has also done bronze sculpture, including one of a bicycle in a tree now housed at the Crystal Bridges Museum of American Art in Bentonville. He also recently began working with German craftsmen to make reproductions of his paintings on glass. Using this technique, he has made 11 windows now located at the Preacher’s Son restaurant in Bentonville, as well as other venues, including his studio.

His degrees in art and architecture have complemented each other well. Before he began painting full-time, he taught both subjects. At various times, he taught and painted in San Francisco, Ohio, Florida, Italy and Saudi Arabia.  He returned to Northwest Arkansas in 1994, at the age of 50, to begin painting full-time. Using his architectural skills, he designed and built his home, studio and gallery on land located at Goshen, served by Ozarks Electric Cooperative. Today, he owns 26 acres filled with hundreds of trees he’s planted over the years in his effort to return the area to woodlands instead of pastureland.

At first look, you might not think Dombek has used watercolor in his creation. Instead of the more common pastel creations where an image’s edge bleeds beyond its borders, Dombek’s almost-photolike paintings are precise and controlled, and often have deep, vivid color. He describes his artistic process as “a fine-tuned investigation” that focuses on the positives, not the negatives.

During his career, his subjects have included trees, birds, rocks, butterflies and barns, which he became fascinated with during his time in architecture school at the University of Arkansas at Fayetteville. It was 1973 and the course was historical preservation.

“We were assigned a project to document a building type in Arkansas,” Dombek says. “I went back to Paris thinking I could document the coal mines, but they were all gone.”

On his way back to school from the Arkansas River Valley area, he started noticing the barns along the roads. So instead of coal mines, he decided to architecturally document the barns, photographing them and filling two binders with barn images. He still has those binders today.

He later obtained a grant that allowed him to spend the summer traveling Arkansas, photographing more barns, which led to his decision to paint them.

Dombek’s decision to focus on art has paid off as he has gained critical and commercial success. His work has appeared in more than 600 collections and in more than 100 exhibitions throughout the world. Locally, Crystal Bridges commissioned Dombek to create the bronze sculpture “Tour de Apple Tree,” now located along one of the museum’s nature trails. In addition, the museum has acquired several Dombek paintings for its collection.

Another award provided him with studio space in New York for about six years.

After a 20-year hiatus, Dombek has returned to the road for gallery shows in Sun Valley, Idaho, and Nashville, Tennessee, which he says have been well-received. His shows include a variety of his work, but his main focus these days is the series “Ozark Portraits.” The subjects for the series mostly came from a neighbor’s five-acre farm down the road from Dombek’s home. The neighbor had an extensive collection of farm machinery.

Louis A. Zona, executive director of the Butler Institute of American Art in Youngstown, Ohio, in writing in Dombek’s Barns & Portrait Paintings book, had strong praise for Dombek.

“Clearly George Dombek is an American original,” he wrote. “The ‘Ozark Portraits’ provide us with a glimpse of yet another side of his artistry. They represent the creative energy, uniqueness, and level of accomplishment that we have long associated with the very best in American art.”

Amylou Wilson, a Fayetteville-based writer, contributed to this article.