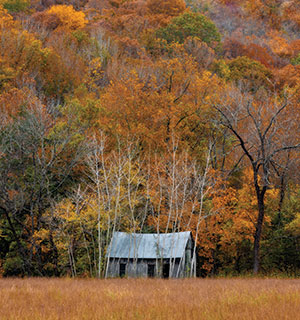 For many Arkansans, autumn is their favorite time of year. Although The Natural State is blessed with scenic beauty that can be enjoyed year-round, it is in autumn that the state truly reaches its aesthetic zenith. And there is no better way to enjoy it than by taking a drive along one of Arkansas’ many scenic routes.

The Arkansas Department of Parks and Tourism suggests eight must-see routes for fall foliage tours. Although these drives are most certainly not the only routes that typically feature brilliant fall color, they are among the best. 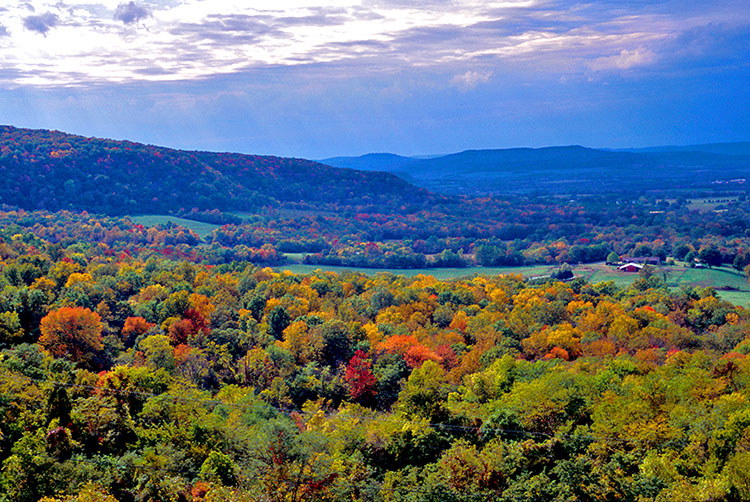 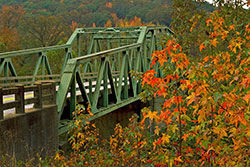 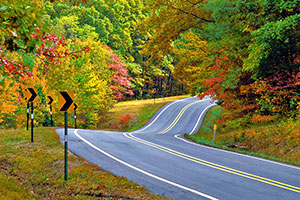 Scenic 7 Byway:  Perhaps the best known of Arkansas’ scenic drives, this route stretches nearly 300 miles as its goes from Harrison in northern Arkansas to the Louisiana line in southern Arkansas. The terrain varies from the twists and curves of the Ozark and Ouachita Mountains with panoramic views to the timberlands region of south Arkansas, which is also known for its famous oil boom towns of Smackover and El Dorado.  Points along the Scenic 7 Byway include the Grand Canyon of the Ozarks, the Buffalo National River and Hot Springs National Park. Peak fall color typically occurs in late October to early November in the northern section of the route, early to mid-November in the middle and mid-November in the southern portion. 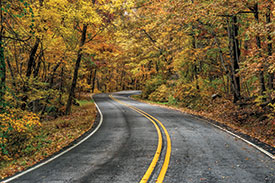 Pig Trail Scenic Byway:  Known for its extreme switchbacks and canopies of trees, the “Pig Trail,” which includes portions of Arkansas 16 and 23, runs for 19 miles through the Boston Mountains (part of the Ozark Mountain range). The route begins at Ozark and ends at Fayetteville, home of the University of Arkansas (UA). In autumn, the color of the hardwood forest is stunning. According to the Encyclopedia of Arkansas History and Culture (EAHC), there is no clear-cut origin of the name of the byway. “Near the junction with the 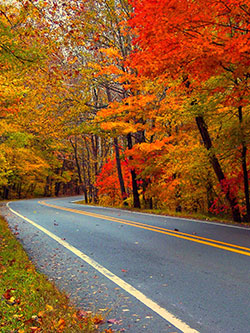 Mulberry River, it was not unusual in times past to see roaming pigs, both feral and domesticated, as Ozark farmers once considered the forest as open range for fattening their shoats and hogs. Whether the road was named for these hogs, its resemblance to a curly pig’s tail, UA’s Razorbacks football team or some combination of the three remains unclear,” according to the EAHC. Peak color typically occurs in late October to early November. 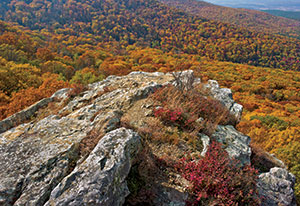 A view from Mount Magazine. Photo by Tim Ernst

Mount Magazine Scenic Byway/Arkansas 309: Starting in Havana, this route takes you on a winding ascent to the top of Mount Magazine, the state’s highest peak at 2,753 feet. The route winds through forested slopes with panoramic views of the Ouachita Mountains to the south and the Arkansas River Valley and the Ozark Mountains to the north. The route pays off in more than just scenic beauty — at the top is Mount Magazine State Park with its magnificent lodge, restaurant and cabins. The color change usually starts in mid-October, with peak color typically in early to mid-November. 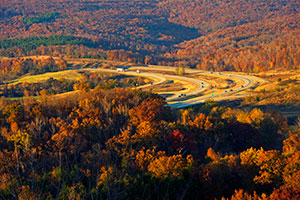 Boston Mountains Scenic Loop/U.S. 71 and Interstate 49:  Until the completion of Interstate 540, now Interstate 49, in 1998, the main route to Fayetteville from Little Rock included U.S. 71. This scenic loop includes U.S. 71, a twisty road that winds through the Boston Mountains from Alma to Fayetteville. The I-49 section of the loop starts near Alma and continues to south of the Missouri border. Traditional peak color for this area is late October to early November.

Interstate 530:   South Arkansas is known for its vast expanses of timber, including bottomland hardwoods that turn brilliant yellow, red and orange in the fall. The 47-mile I-530 route extends between Little Rock and Pine Bluff. Typical peak color occurs from early to mid-November. 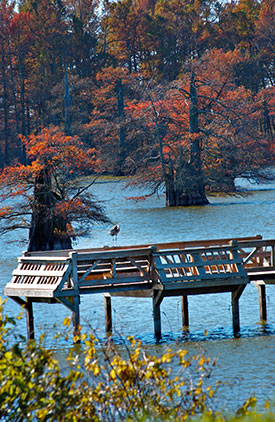 Great River Road National Scenic Byway:  Arkansas’ portion of the 10-state Great River Road was designated a national scenic byway in 2002. The 362-mile route runs roughly parallel to the Mississippi River and takes travelers through the agricultural lands of the Delta, as well as the dense woodlands of the St. Francis National Forest. While on this drive, you can visit the cities of Blytheville, West Memphis, Marianna, DeWitt, Dumas, McGehee and Lake Village. This route also is near the restored boyhood home of legendary country singer Johnny Cash, who grew up in Dyess. Peak color is typically in mid-November.

Crowley’s Ridge Parkway National Scenic Byway:  This eastern Arkansas route was the first designated National Scenic Byway in Arkansas. It includes portions of six U.S. highways, nine Arkansas highways and a national forest gravel road. According to the Encyclopedia of Arkansas History and Culture, Crowley’s Ridge “is an unusual geological formation that rises above the Alluvial Plain of the Mississippi Embayment (Mississippi Alluvial Plain, or Delta).” Peak color is typically in mid-November. 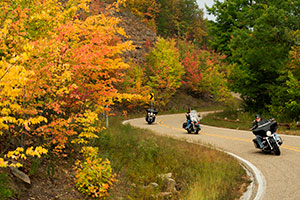 and Ouachita National Forest in western Arkansas and eastern Oklahoma for 54 miles.

The road extends across the tops of the mountains, providing expansive views of the surrounding forest. Once you reach the top of Rich Mountain, Arkansas’ second highest peak at 2,680 feet, you will be at Queen Wilhelmina State Park, which features a newly renovated lodge and restaurant, among other offerings. The route, which starts at Mena, continues to Talihina, Okla. The traditional peak color for this area is early to mid-November. 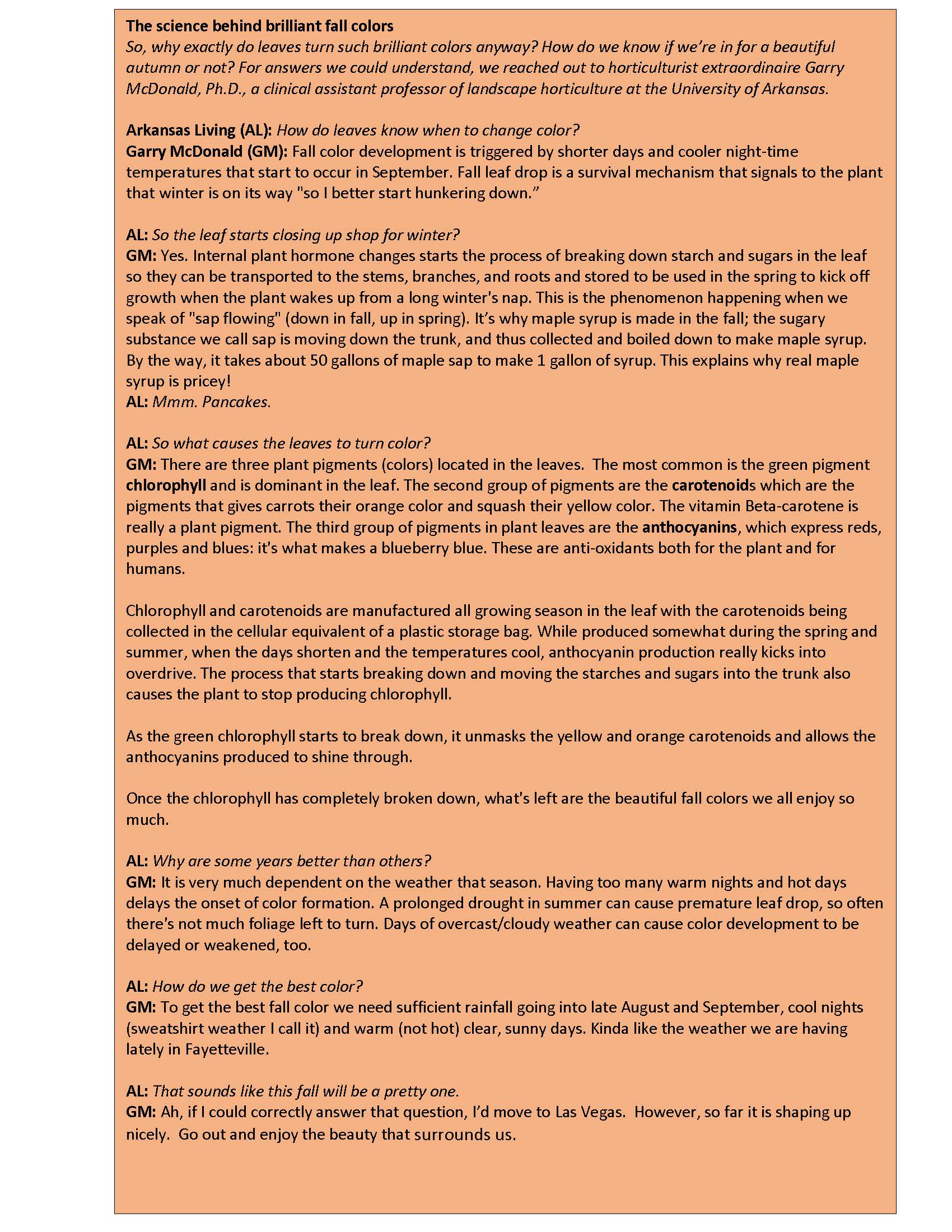 For more information on fall foliage in Arkansas, visit: www.arkansas.com/travel-tools/fall/.

Sources: Arkansas Department of Parks and Tourism, the Encyclopedia of Arkansas History and Culture.