Pumpkins and fall go hand in hand. In addition to the traditional carved Jack-O’lanterns, they are used to add color and interest in the fall garden along with gourds, hay bales and corn stalks. Pumpkins come in all sizes and shapes, from the traditional orange, to white, red, green and striped. There are smooth rinds and warty ones among the more than a billion pounds of pumpkins produced in the nation each year.

Although pumpkins aren’t difficult to grow, they do require a long time to mature and plenty of space. That’s why most of us let someone else do the growing. 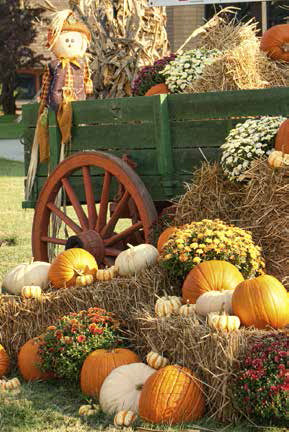 Let your imagination be your guide with fall’s bounty. Photo by KClark/bigstock.com

The name “pumpkin” comes from the Greek word “pepon,” meaning “large melon.” Pumpkins are members of the cucurbit family, which means they are kissing cousins of cucumbers, squash, watermelons and gourds.
Scientifically speaking, pumpkins are a fruit (they contain seeds), but when it comes to cooking they are often referred to as a vegetable. They are normally planted in the garden once the soil warms up in June or early July, which will have them ready for a fall harvest. Sizes range from the tiny “Jack-b-little,” which produce a softball-sized fruit, up to the giant award winners like “Big Max” and “Prize Winner,” which can produce fruits weighing more than 100 pounds. These giant fruits aren’t that attractive, but they do break records.

Pumpkins have been around a long time, dating back to Peru in 2000 B.C. They were a food staple in the diet of Native Americans. The tradition of carving a pumpkin and lighting it with a candle dates back to the Celtic people. A common tradition each fall was a harvest bonfire, symbolizing the end of summer. Families would carry an ember from this fire to light their own fires at home. The traditional mode of transportation for the ember was a hollowed-out turnip. They began to carve faces into their turnips to ward off evil spirits. After the potato famine and the migration to the New World, turnips were not as readily available as pumpkins, so pumpkins became the fruit of choice. While pumpkin carving is still a family tradition, many paint faces on them or simply stack pumpkins in the landscape, bordering beds or clustering them with mums and pansies. Uncarved, they can easily last through Thanksgiving. Once carved, a pumpkin deteriorates in days. 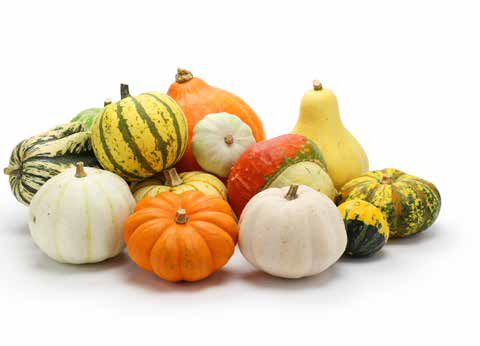 Pumpkins and gourds come in a variety of shapes and colors. Photo by Oysy/bigstock.com

If decoration is your main goal, choose a pumpkin with a stem attached. Look for one with a smooth rind that is free of soft spots or blemishes. If there is no stem, the fruit tends to deteriorate rather quickly.
If you choose well, they can last for months both inside and out. To extend their life, clean them and spray them with a clear paint or varnish. Some folks even paint them silver or gold to extend their usefulness into the Christmas season. 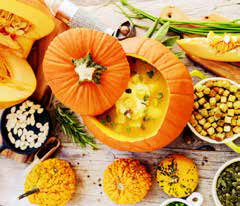 When making pumpkin pie, most folks buy canned pumpkin, versus cooking a fresh one, but you can cook the whole pumpkin and make your own pie filling. Pie pumpkins are traditionally smaller fruited forms — usually between three to six pounds. Pumpkins can be roasted and served as a vegetable, and you can even cook a stew or soup inside a hollowed-out pumpkin and roast it in the oven. The flowers are also edible and roasted pumpkin seeds are a tasty snack. Pumpkins are a good source of nutrition. They are low in calories, fat and sodium and high in fiber. They are loaded with vitamins A and B, and potassium. The seeds are very high in protein and are an excellent source of B vitamins and iron.

Pumpkin patches are springing up all over the state and are a favorite with families and school groups. Hay rides and pumpkin decorating contests add to the festive spirit. In addition to pumpkins, a wide variety of gourds are usually available as well. Many botanical gardens across the country pay homage to the pumpkin and use them extensively in their fall landscapes.