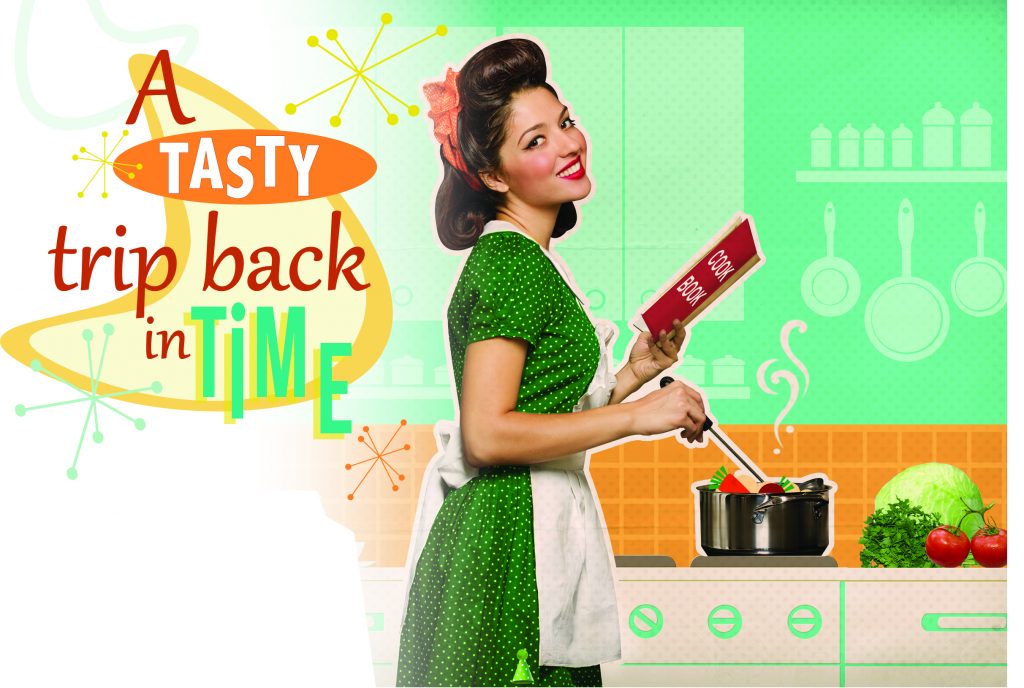 Arkansas Living has always been about Arkansas eating.

It’s a tradition that began with the very first edition of Arkansas REA News in November of 1946, which featured “News for REA Homemakers,” with tips on freezing fruits and vegetables. Ever since, many Arkansas families’ favorite, time-honored dishes have originated from these pages.

In celebration of our 75th anniversary, we have searched the archives to reprint one recipe from each decade. We’re sharing the recipes as originally written to preserve their charm.

We’re honored to have enjoyed a place at your table all these years!

The following recipe comes from a story about budget-friendly meals that began: “What more can a woman want than to fix meals that please a man? … Any homemaker can please her man — and save him money — with money-saving main dishes.”

Times have changed, but the dish still sounds delicious!

Cut link sausage into ½-inch pieces. Fry until well done. If bulk sausage is used, shape it into small balls before frying or break it up as it cooks.

Pare and slice potatoes and apples. Mix salt, flour, and sugar together and blend with cold water. Arrange layers of potatoes, apples, and sausage in a baking dish, pouring some of the flour and sugar mixture over each layer. Top the dish with apples and sausage, and add drippings.

Cover; bake in a moderately hot oven (375 degrees F.) until apples and potatoes are tender—about 45 minutes.

To complete the meal be sure to have that crisp green salad that everyone needs for daily vitamin content. For dessert try a well-chilled creamy rice pudding made with eggs and milk to supplement the protein from the small serving of meat.

And for variety you might use thick slices of smoked shoulder, or shoulder pork chops sliced thin and well browned to replace the sausage.

The following recipe — included in a “Party Grill Cooking” article — was to be cooked on an electric griddle, offering “rural homemakers an opportunity to cook anywhere there is a 115-volt electrical outlet.” While the name might suggest these burgers were to be prepared for men, the black-and-white photo shows a smiling father cooking for the children, while the ladies lounge on the patio. 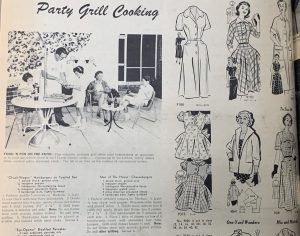 In addition to recipes like “Man of the House” Cheeseburgers, 1950s magazines included sewing patterns.

The following recipe was included in a roundup titled “Pecans aplenty.” It also has mayonnaise and sour cream aplenty — a full cup of each! And bacon! How could Celestial Chicken Salad not be out of this world? 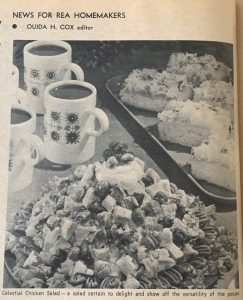 Before she edited Rural Arkansas and eventually Arkansas Living, the late Ouida Cox contributed recipes and other content for the “Women’s Department.”

There might have been more dry counties in the 1970s, but that didn’t stop Arkansas cooks from baking with hooch — for the taste, not tipsiness. Said the recipe, “The spirits in the ‘secret’ ingredient evaporate during cooking leaving only the delightful flavor …” 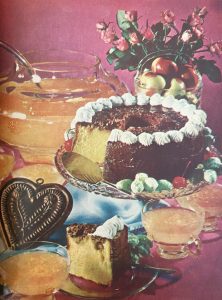 Grease and flour a 10-inch tube pan or Bundt pan. Chop pecans and sprinkle over bottom of pan. Mix the cake mix, pudding, eggs, oil, water and rum together. Pour batter over chopped pecans and bake at 350 degrees 50 to 60 minutes.

While cake is baking, mix glaze:

Boil together in saucepan for five minutes, stirring. Remove cake from oven, pour glaze over. Let set for at least 10 minutes before removing. Add whipped cream and garnish with grapes rolled in powdered sugar, if you wish. 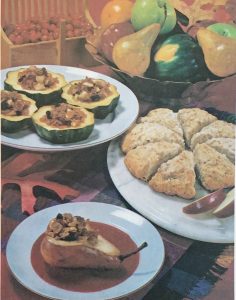 The following recipe appeared in an article titled “New Ideas for Autumn,” in which each recipe “cerealously” contained cereal, the ultimate 1980s convenience food.

How have we gone this far back into the Arkansas Living recipe archives without a gelatin salad? And without more sour cream? This recipe, which produces a marvelous magenta ring, is just the thing! 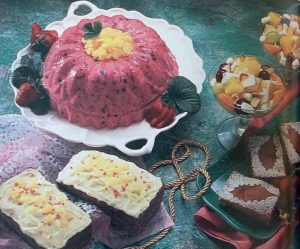 Pretty in pink: A colorful gelatin salad from the 1990s.

Even Arkansas Living, known for traditional, tasty Southern fare, couldn’t escape the trappings of the low-fat craze, as proven by this recipe from a roundup of light sauces, titled, “I’ll Have That … On The Side.”

Heat all ingredients in a small saucepan over low heat until melted and smooth, stirring constantly. Serve immediately.

We’ll conclude our tasty trip back in time with a more traditional recipe credited to reader Nell Hattabaugh of Booneville. It’s “plant-based,” and yet it’s still classic Arkansas Living fare at its deep-fried finest.