They had been hearing for some time that to go on the Electric Cooperative Youth Tour to Washington would be a “trip of a lifetime.” They saw it in recruiting articles in Arkansas Living and heard it from students who had been on the trip before. On June 9-15, 42 Arkansas high school students found out firsthand that the promotion was indeed true. 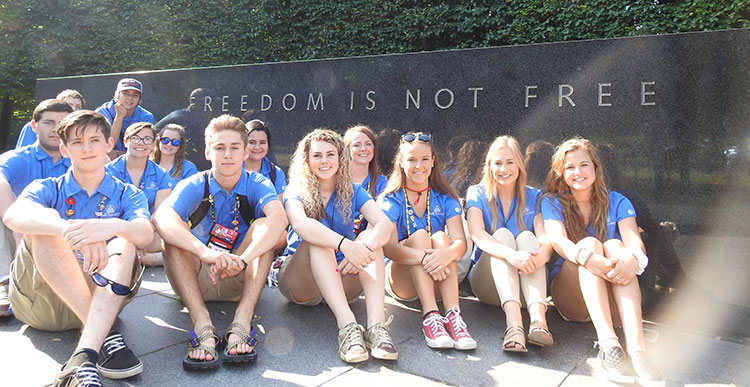 The 2017 tour began on the evening of June 9 when the 2017 Youth Tour delegates gathered for an orientation dinner at the Embassy Suites in Little Rock. The special guest was Lee Hayes of Beebe, a World War II veteran and 2013 Honor Flight participant, who introduced the theme of the tour — “Freedom is Not Free.” After his presentation, several students from the 2016 Youth Tour, who returned for a “reunion,” shared their thoughts about the trip. Their comments inspired me even more as I began my 15th tour as Arkansas’ Youth Tour director. 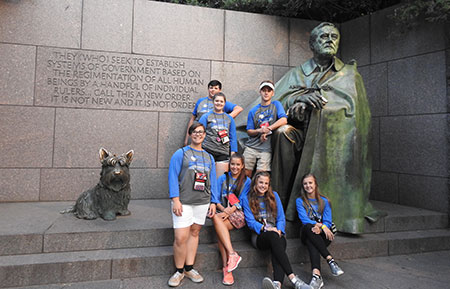 A group of Arkansas students pause for a photo at the statue of Franklin Delano Roosevelt and his dog, Fala, at the FDR Memorial.

We were up and ready to board the bus for the airport by 5:15 a.m. For about half of the students, it was their first time to fly on a plane. With a mixture of nervousness and excitement, the group boarded the Delta Airlines flight with an 8:25 a.m. departure for Atlanta. After a brief layover there, we boarded the flight to Washington Reagan National Airport, arriving late that afternoon. We boarded our charter bus and then headed to our hotel in Arlington, Va. After check-in and dinner, the tour was truly on as we headed out to visit the Dr. Martin Luther King Jr. Memorial and the Franklin Delano Roosevelt Memorial, and then walked around the Tidal Basin to see the Jefferson Memorial at sunset. 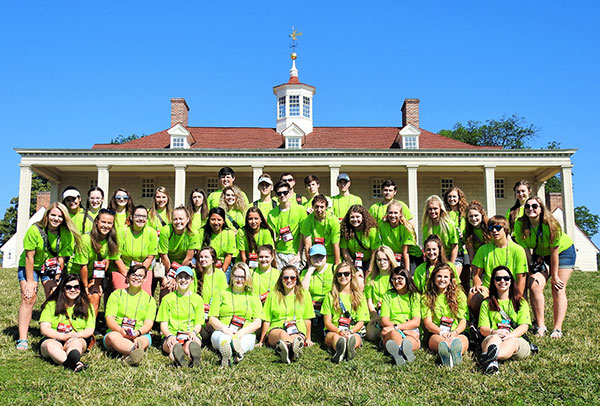 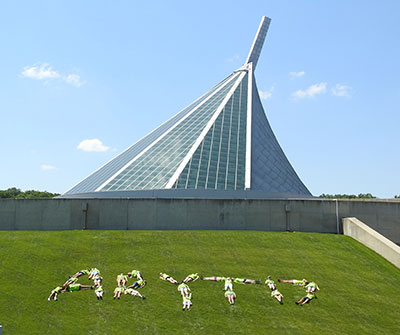 On Sunday, we had another full day starting at Mount Vernon, the home of George Washington, near Alexandria, Va. From Mount Vernon, we drove south to Quantico, Va., to the National Museum of the Marine Corps where we learned about the sacrifices U.S. Marines have made for our country throughout its history. That evening, after dinner and a break at the hotel, we joined students from other states for a cruise of the Potomac River aboard the Spirit of Washington.

We began this day with a visit to the hallowed grounds of Arlington National Cemetery where we watched the famous Changing of the Guard ceremony at the Tomb of the Unknown Soldier. Next, we headed to the Newseum, which chronicles the history of America’s news media. We concluded our day of touring with a visit to the U.S. Holocaust Museum. 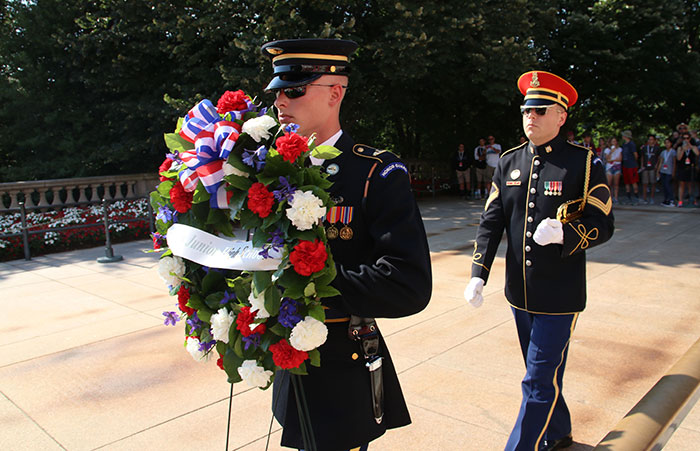 Members of the Old Guard of the U.S. Army perform a wreath-laying ceremony at the Tomb of the Unknown Soldier at Arlington National Cemetery. photo by Tehya Hinkson

After dinner at the Hard Rock Café, a Youth Tour tradition, we headed to the Youth Day program hosted by the National Rural Electric Cooperative Association (NRECA), the national association for electric co-ops.

Here we joined hundreds of students from across the nation to learn more about the cooperative program. We also cheered as Braden Bateman of Ozark introduced himself as part of the Youth Leadership Council. Bateman, sponsored by Arkansas Valley Electric Cooperative, was chosen by the 2017 Youth Tour chaperones to serve on the council as Arkansas’ representative. 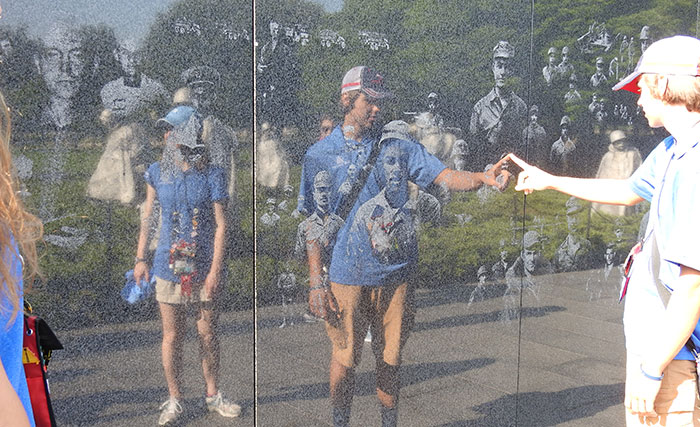 The present touches the past as Caine Walker of Rector gazes into the etched faces of soldiers on a granite wall at the Korean War Memorial. photo by Geri Miller

On Tuesday, Jeanne Fogle, a renowned Washington tour guide and historian, led us as we visited the World War II Memorial and the Korean War Memorial. We then headed to the U.S. Capitol and the Library of Congress for tours. While at the U.S. Capitol, students visited with members of Arkansas’ congressional delegation and also had their photos taken with the lawmakers. 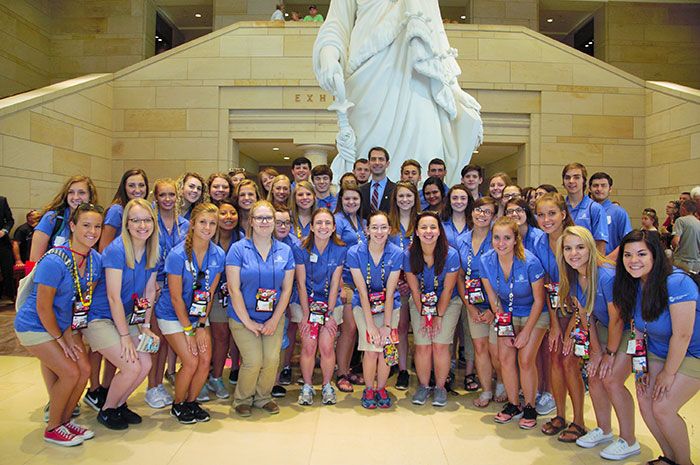 After touring the U.S. Capitol, Arkansas students gathered around the Statue of Freedom plaster model at the Capitol Visitor Center for photos with U.S. Sen. Tom Cotton. photo by Geri Miller

That evening we attended the Sunset Parade at the Marine Corps War Memorial featuring a performance by “The Commandant’s Own,” the U.S. Marine Drum and Bugle Corps, and the Marine Corps Silent Drill Platoon. 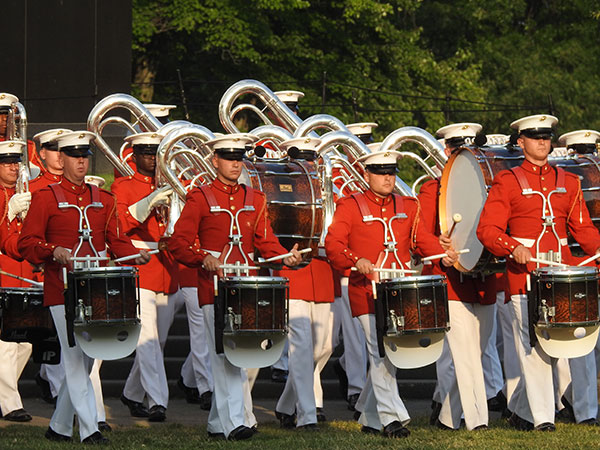 After the parade, we headed to the Lincoln Memorial, followed by the Vietnam Veterans Memorial. While there, we had one of many “magic” moments when Olivia Schmidt of Pocahontas found the name of her grandfather on the wall. He had died when her father was only 4 years old. With paper and pencil, she made a rubbing of the name to take home to her family.

The tour continued on Wednesday with a visit to see the White House and have photos taken. But, this tradition was cut short when we were asked to leave by security in the aftermath of the shooting of four people, including a congressman, at a ballpark in nearby Alexandria, Va., where they were practicing for a charity baseball game.

We left the area and headed for the White House Visitor Center. Fittingly, we were wearing T-shirts with the message “Keep Calm and Co-op On.” And that is exactly what we did. 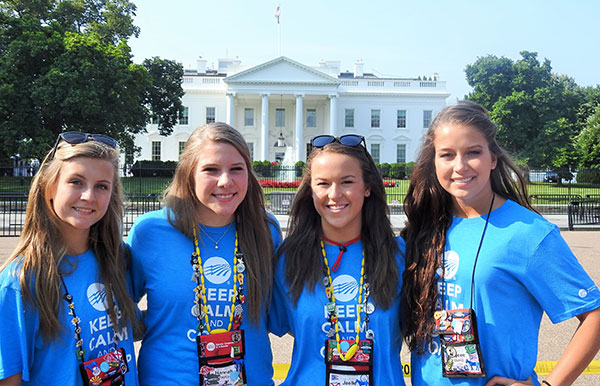 Before security asked us to leave the area we were able to capture a few photos in front of the white house. C & L Electric delegates Hannah Taylor, Jaelle Morrison, Jaycee Merritt and Brianna Burns. photo by Geri Miller

From the visitor center, we went to the National Mall for photographs before we split into groups to tour the “Big Three” museums of the Smithsonian Institution — the American History Museum, the Natural History Museum and the Air and Space Museum. That evening, the students attended the farewell event, including a dinner and dance with students from other states. 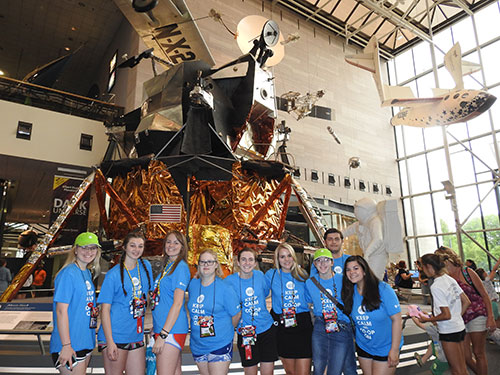 The Air and Space Museum is one of the favorites. 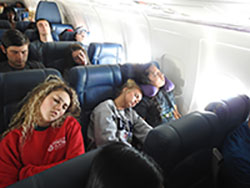 Almost everyone grabbed a power nap on the way home!

It was another early wake-up call for the last day of this fast-paced tour. We boarded the bus by 5:30 a.m. and arrived at Reagan National Airport by 6 a.m. for check-in. We arrived back in Little Rock shortly before 2 p.m. where family members and friends greeted the weary travelers. There were tears and hugs, and memories that will last a lifetime 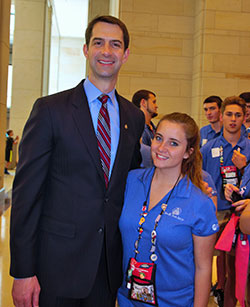 Madison had the opportunity to meet U.S. Senator Tom Cotton.

“The 2017 Youth Tour was definitely a trip to remember. I have lived in many different states, and would have to say seeing Washington, D.C., and being in Virginia was unlike the rest. The trip allowed me to connect on a personal level with the events we learn about in history class by seeing and being where they took place. My favorite parts were touring inside the Capitol, the Lincoln Memorial and the Newseum. It was amazing getting to see all of the monuments and buildings that we see on social media and the television in person. Plus, I was able to meet some great people with whom I became friends from all over Arkansas, as well as other states.

Thank you to all of the chaperones and everyone who helped make Arkansas Youth Tour 2017 a true trip of a lifetime.” 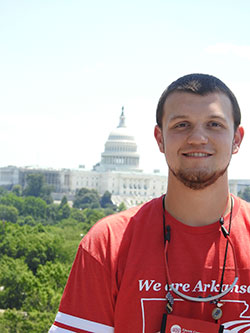 “My first trip to D.C. was an unbelievable, once-in-a-lifetime experience where I was able to see, in person, all of the memorials and monuments I’ve read about, and I was able to attain a stronger sense of patriotism for my country. It was a trip I’ll never forget.”