Linda Moore of Clinton, a 2016 Energy Efficiency Makeover winner, holds an old energy-ineffecient light bulb from her home, which was replaced by an efficient LED.

Equipped with caulk guns, boxes of LED lights, cellulose insulation installation equipment and an infrared thermal imaging camera, among other equipment, the co-op’s makeover team was ready to seal air leaks that were making Moore’s home uncomfortable and her electric bill higher than normal.

Moore’s home, located near Clinton, was among 17 homes chosen across the state for the energy efficiency retrofits as part of the Ninth Annual Energy Efficiency Makeover Contest. 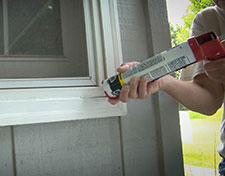 Caulking is a major part of the makeover process.

Each of the state’s 17 electric distribution co-ops selected a winner from its service territory based on a variety of factors, including energy usage based on the square footage of the home. The winners were notified in early August and the retrofits began on Aug. 9. At press time in mid-August, all contest retrofits were expected to be completed by early September. 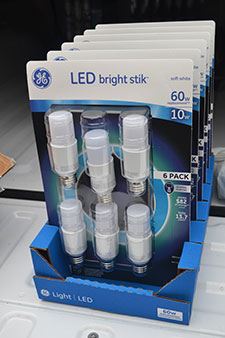 The contest is part of the co-ops’ energy efficiency program, which is designed to help electric co-op members have more comfortable homes while also saving money on utility bills.

“It’s a true win-win,” Curry said of the makeover program. “The co-ops’ members, who are the owners of their electric co-op, save money on their energy bills that they can use for other needs. And as our members use less electricity, we don’t have to build costly power plants. To put it simply, the kilowatt-hour with the lowest cost is the one that isn’t used.”

Arkansas’ electric co-ops have long promoted energy efficiency to their members, and in 2008, they expanded their energy efficiency awareness campaign with the launch of the makeover contest. From 2008 to 2014, one grand-prize winner was selected to receive up to $50,000 in energy efficiency improvements while runners-up from 16 other electric co-ops received new energy-efficient water heaters. The improvements were done by a crew of co-op employees along with sponsors, many of whom donated both labor and materials. Last year, the cooperatives decided to expand the reach of the program by doing less extensive, but still very effective, energy efficiency makeovers for winning members from each of the state’s 17 electric distribution cooperatives instead of one single winner. 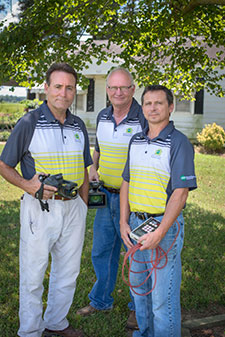 From L to R: Bret Curry of AECC, Gary Bean of AECC and Johnnie LaCaze of EEtility are key members of the AECC makeover team.

As part of the new approach, AECC enlisted the help of EEtility, a Little Rock-based company, to coordinate energy efficiency retrofits for makeover winners. EEtility is working with co-ops and other utilities in Arkansas and other states to help their members and customers make energy efficiency improvements to their homes.

This year, the average size of the homes selected for the makeovers were approximately 1,350 square feet, Curry said. All but one was single-story and averaged three bedrooms. Two were manufactured homes.

“The purpose of our annual makeover project is education,” Curry said. “We teach the fundamentals of building science to help our members have more comfortable homes and manageable electric bills. This year we are helping single mothers, retirees on a fixed income, widows, veterans and young couples just getting started.”

Curry noted that in visiting with co-op members, he has learned that first and foremost, they want reliable electricity. But it must be affordable, too.

The average age of the homes selected for the makeover was 40 years, with an average annual utility bill exceeding $2,500. An energy-efficient home would use about half of that amount. Insulation was at best inadequate, and some had large areas of missing insulation. As part of the makeover, each home was blanketed with a dense layer of cellulose insulation at today’s recommended standard. The lighting load in each home was reduced significantly, or by nearly 1,500 watts, which is the equivalent usage requirement of one plug-in space heater. This was achieved by installing General Electric LED Bright Stik high-efficiency light bulbs.

A significant energy culprit in most of the homes was disconnected, uninsulated or leaky ductwork, Curry said. The average amount of leakage was 400 cubic feet per minute, or the equivalent of one ton of heating or cooling. After the makeover, each home will have negligible duct leakage, Curry said. And the average annual energy savings per makeover home is estimated to be about $650.

Such was the case for Moore, a 66-year-old cashier for Walmart. In addition to discovering air leaks, a major culprit for her high energy bills was a faulty thermostat on her heating and cooling unit. Every time she turned on her air conditioning, the system’s heat strips, designed for use in winter, were coming on, adding heat to the home and forcing the air conditioner to work harder. In the winter, the air conditioning would come on, along with the heat strips, leaving her house cold and raising her heating bill.

“I was freezing in the winter and burning up in the summer,” Moore said, standing outside of her home as the makeover team worked inside. “My light bill was so high, it was awful.”

She even had her windows and roof replaced, thinking that would solve her high electricity usage. But it was to no avail. The bills were such a burden that she switched to levelized billing with Petit Jean Electric. For July alone, when temperatures peaked 100 or more degrees, her home racked up a $783 bill, said Terry Drew, member services representative for Petit Jean Electric. Even on levelized billing, her monthly bill was averaging $246 for an 1,800-square-foot house.

“She was selected (as contest winner) because she had the worst bills for the square footage,” Drew said, adding that he is happy that the thermostat issue was discovered as part of the energy audit.

“That is something that made me feel really good because we wouldn’t have found that without the makeover,” Drew said. 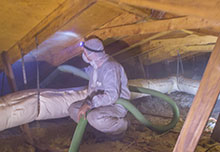 Cellulose insulation is installed at a makeover home.

Even though cellulose insulation was still to be installed, the thermostat fix, along with new lighting and sealed air leaks, had already made a huge difference in the comfort and electricity usage at Moore’s home on Aug. 16.

“Oh man, I am so happy,” Moore said, adding that she is proud to be a co-op member. “I love it,” she said with a beaming smile. “I wouldn’t have it any other way.” 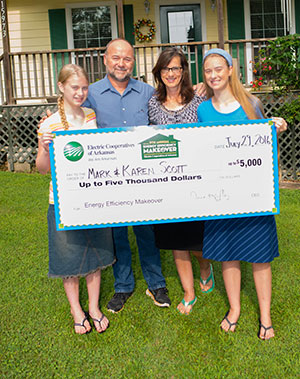 The winners of the 2016 Electric Cooperatives of Arkansas Energy Efficiency Makeover Contest are:

To learn more about the makeover, visit: www.ecahomemakeover.com or www.facebook.com/SmartEnergyTips.org/.