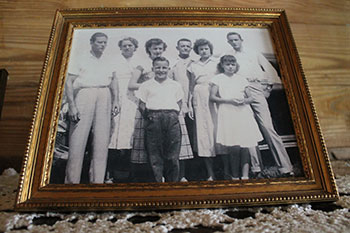 I remember when Johnny Cash died. Forgive me, but I was floored at what a big deal it was — the coverage lasting for months on end. So, at age 30 I decided maybe I should give this Johnny Cash a real listen. I have to admit, that listen changed me. Out of grudging curiosity, a fan was born.

Ever since it opened to the public in August 2014 I’ve been meaning to visit his boyhood home at the Historic Dyess Colony. Using this piece as my excuse, I finally got to visit. 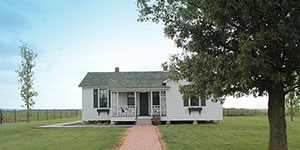 The  restored boyhood of Johnny Cash

The Dyess Colony Resettlement Area was one of many Works Progress Administration (WPA) programs of the 1930s. By the end of 1930, two thirds of Arkansas farmers had lost their farms. The WPA built the Dyess federal agricultural resettlement community in 1934 on 16,000 acres of uncleared Mississippi County land. A circle of public buildings and shops served the community as a cooperative, amidst a new town full of buildings and businesses.

Three-year-old Johnny (then known as “J.R.” or “John”) and his family moved to “Plot 266” in Dyess in 1935. Theirs was one of 500 farms that each had a small farmhouse, outhouse, smokehouse, henhouse, and a barn, as well as 20-40 acres of swampy Delta farmland that needed clearing. The life required hard work, but it kept families out of poverty.

The Dyess Colony restoration, a project of Arkansas State University (ASU) under the direction of  Dr. Ruth Hawkins, is about 40 minutes northeast of Interstate 40 from West Memphis. The project includes the restored buildings of the town center or circle, including the Greek-revival Administration Building, and the Dyess Theater and Visitor Center. All the Dyess and Cash exhibits in the Administration Building are lively and professional, inviting interaction and exploration. 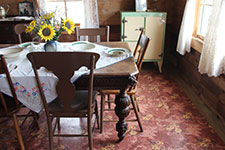 The Cash family home’s dining room table and piano were their fanciest furnishings. 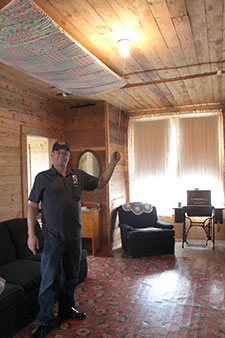 After a welcome video by surviving Cash family members, we took an ASU tour bus down a long gravel road to the Johnny Cash Boyhood Home, about a mile away. Charming and simple, the Dyess Colony homes featured a front porch with a swing, a screened-in back porch (just the way God intended), a living room, kitchen, dining room, bathroom and two bedrooms. The Cash family’s décor was understated, except an incongruously ornate dining room table surrounded by happily mismatched chairs. The family entertained themselves with the radio and Mama (Carrie) Cash’s piano, everyone singing along.

The house had one electric light bulb. My friendly guide, facility administrator Larry Sims, told me the Dyess Colony homes were built with that single electric socket, anticipating electrification. Even so, the colonists had to wait 10 years for that light to come on the first time. 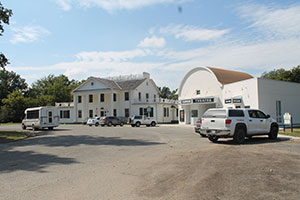 The Dyess administration building now houses a museum and the rebuilt theater houses exhibits, a classroom and gift shop.

Tourists from all 50 states and from at least 45 countries have gone out of their way to visit the tiny Delta town. Visitation has grown to about 10,000 people per year, with perhaps three times that expected in years to come after the other phases of the project are complete. 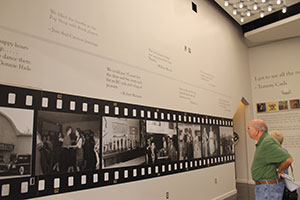 Since opening, they have restored the exterior of the Dyess Theater (inside they have built Dyess Pop Shop exhibits) and Visitor Center, poured new concrete into the Commissary foundation to form a bandstand for events, added historic signage throughout Dyess and placed a new sign on nearby Interstate 55 to catch people passing through. Hawkins told me that next they plan to rebuild the Cash’s barn, outhouse, smokehouse and henhouse. The barn’s exterior will be identical to the original structure; the inside will include modern classroom and facility space. Further down the road (literally), they plan to create a walking and biking trail from the Visitor Center to the homestead.

Plans are also underway for a bigger annual festival, starting in October 2017. For several years a one-night Johnny Cash Music Festival has been held in Jonesboro. Organizers are reinventing it as the Johnny Cash Heritage Festival, to be held over three days on the actual sites in Dyess, culminating with a concert of major talents — including singer-songwriter Rosanne Cash — right next to the homestead. The heritage festival will showcase a number of fascinating federal programs in the arts like the Federal Writers Project and other regional history.

On the back o 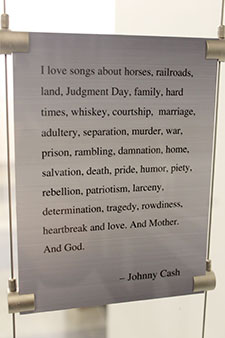 f his first album cover, Cash credited his love of music to his boyhood in Dyess and growing up in a family that sang together. I could not leave Dyess without hearing that deep voice some more, so I bought a CD in the gift shop. Driving away from Dyess with the windows rolled down, I let Johnny Cash’s music flow all through my cotton-loving heart, then headed home, singing along with him. I understand now, Johnny.