Many in Central Arkansas have gotten to know Victor Fleming — and perhaps they wish they hadn’t  — through his day job.

Fleming has served as the Little Rock traffic judge since 1997. His official title is State District 31 Judge, 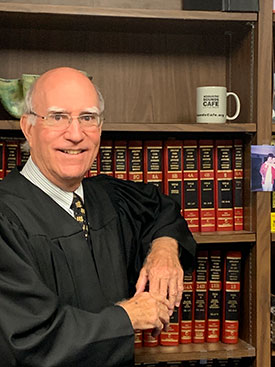 And while maybe we at Arkansas Living weren’t too excited to see Judge Fleming in our lead-foot phases of the latter ’90s, we’re thrilled for him to join the magazine as a monthly contributor beginning this issue — not as a court official, but as a crossword constructor. (See his first Arkansas Living puzzle on page 38.)

Fleming, who has had 46 crosswords published in the New York Times (one of which was co-written with former President Bill Clinton), is a practiced puzzle pro. He writes the monthly puzzle for The Rotarian service club magazine. His puzzles also have appeared in The Wall Street Journal, The Los Angeles Times and USA Today.

A passion for puzzles

Fleming, a native Mississippian, picked up a passion for puzzles early on.

He says, “I remember seeing crossword puzzles in the Weekly Reader, a little publication that we got in elementary school. And my mother encouraged me to do the crossword in the newspaper, starting around the time I was in about the eighth or ninth grade. She liked to solve crossword puzzles. So I started doing that. I remember solving puzzles in daily papers through college and law school.”

Fleming says that while attending what is now the William H. Bowen School of Law in Little Rock — the same school where he has taught a Law and Literature course since 2003 — he toyed with making crossword puzzles.

He says, “It was so time-consuming to make a crossword that I decided to put it aside and wait until they invented computers and the internet and then take it up again.”

Again was around 2003. Fleming says he worked with two mentors on his craft “because I was making fundamental mistakes, even though I thought I knew what I was doing.”

His puzzles began appearing in national publications by 2004, the year he first submitted to the Times. His first New York Times puzzle was published in March 2005.

Fleming has coached other crossword enthusiasts to success. He recently learned that his 47th Times puzzle — a collaboration with mentee Simon Marotte, a Conway high school student — has been accepted for future publication.

Fleming says, “Generally, what makes a good crossword puzzle is the theme. That’s a bit crazy because some people solve crosswords without ever realizing that there is a theme. … Another thing people like about crosswords is the humor in them. There are seven or eight clues out of the 70-80 in a puzzle that are intended to make you smile or laugh.

Fleming most certainly has a sense of humor. After all, he once wrote a book titled Real Lawyers Do Change Their Briefs. And he was featured in Wordplay, a 2006 documentary about the crossword community, singing his own original song about the craft: “If You Don’t Come Across (I’m Gonna Be Down).”

There’s a link that connects his crossword and courtroom callings: conflict resolution.

In his role as traffic judge, Fleming says, “I look at it not so much as making decisions, which is what people immediately think of when they think about being a judge. But I think about it as helping people get their problems solved.”

He estimates that 50% to 60% of tickets issued are for minor offenses and never involve a court appearance. The cases that reach court often involve more serious offenses and complex situations, including suspended/revoked licenses and substance abuse. He says, “Close to 90% of these plead guilty, so the only decision is the sentence. At that phase, there’s a lot more time involved in trying to help people solve their problems than is widely acknowledged.”

Fleming and his staff had to do some problem-solving of their own, due to the COVID-19 pandemic. With the courtroom closed to the public, they’ve moved to handling hearings via phone and videoconferencing.

When other aspects of life are complicated, Fleming says, there is satisfaction in completing a crossword puzzle.

“You can bask in that for a few seconds and then go on.”