In April, the Amazeum one-upped itself, debuting a fully retractable roof for use on days when the weather complies. Photo by Jenny Boulden

In 1971, Gene Wilder sang these lyrics in the film “Willie Wonka and the Chocolate Factory”: 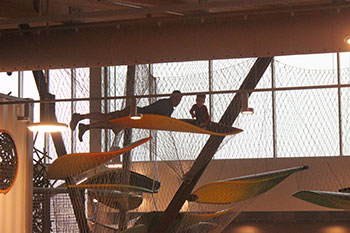 A father and son rest on one of the “leaves” of the climbable tree canopy. Each leaf holds 1,000 pounds. Photo by Jenny Boulden

Wilder, of course, was singing of Willie Wonka’s Chocolate Factory, but 45 years later in Arkansas he could be singing about the Scott Family Amazeum in Bentonville. The new children’s science museum, celebrating its one-year anniversary this month, is a labyrinth of learning made fun — and like Wonka’s, the Amazeum even features a laboratory of chocolate confections.

Named for the family of former Walmart CEO Lee Scott and his wife, Linda, great supporters of the museum, the Scott Family Amazeum opened in July 2015 with much hoopla. The $28.5 million facility sits on the Crystal Bridges Museum of American Art campus. Heading to Crystal Bridges, you literally can’t miss it.

Marketing Director Dana Englebert said the museum had projected it would have 180,000 visitors in its first year. “We have surpassed 250,000 before our first year’s even ended!” she said. “It’s all very, very loved.” 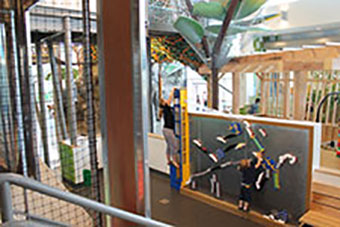 Nicole Atchison, left, of Grafton, Mass., helps her son Bryce, 4, build a Rube Goldberg machine, a la the Mouse Trap board game, on a magnetized wall.

Creativity — the actual act of creation — is at the heart of everything in the 50,000-square-foot learning center. She said the museum is intended to complement other children’s science centers in the state, including Mid-America Museum in Hot Springs and the Museum of Discovery in Little Rock. A distinct difference is that the Amazeum is heavily focused on tinkering and making. “We’re all about using ordinary, everyday objects to create the extraordinary,” Englebert said.

Nine-year-old Arden Carroll of Little Rock visited the Amazeum on Mother’s Day with his sister Sophie, 7, and parents Brandie and Tim Carroll. “It was so cool!” he said, when asked about it two months later, talking nonstop about an indoor treehouse air cannon they loved operating. Another highlight was an outdoor area with many water activities, including making boats out of household objects like bolts, tin cans and string. “My boat was basically made of felt, popsicle sticks and rubber bands — and it floated!” Sophie reported that her boat “kind of floated, but tipped over.” 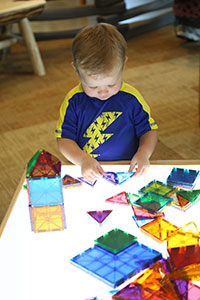 “We want the kiddos to feel comfortable creating things from the time they can lift a little hammer to actually thinking through a complex process of, ‘How do you do that?’ We raise makers here,” Englebert said. “We don’t teach them how to do it.”

The museum exhibits are uniquely grounded in the surrounding area, intentionally specific to the particularities of the region. For example, because Northwest Arkansas has a lot of trucking and distribution centers — it’s renowned for distribution and logistics science — a “General Mills’ Lift, Load and Haul” section of the museum gives children a chance to discover through play what that local industry is about. Similarly, a winding replica Ozarks cave that children can explore, as well as a massive, climbable tree installation and other wildlife elements, get kids more excited about The Natural State’s outdoor offerings.

Sophie and Arden told of climbing the “tree” and discovering the museum had set up camera feeds of different species of birds around the state. “We got to see a bird hatch out of its egg!” Arden exclaimed. “I think it was a harpy eagle.”
Likewise, the log cabin homestead and farm where Sophie spent much of her time are a hat tip to Arkansas’ heritage and agricultural industry today. 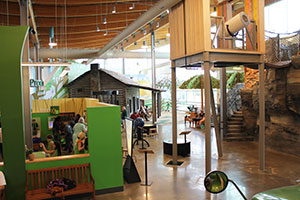 : Interactive children’s exhibits cover almost all of the almost 50,000 square feet of the Amazeum at the intersection of J Street and Museum Way in Bentonville. Photo by Jenny Boulden

Family members of all ages can be seen laughing and learning in the museum. Englebert characterized ages 2 through 10 as “our sweet spot.” Most spaces are accessible to any age, but two areas are set aside for the youngest children to play, and some activities or experiments are only for kids 7 and up.

The Amazeum has an “amazing, dedicated” staff of play facilitators working on the floor, Englebert said, but it is not a drop-off facility. “Parents or caregivers need to stay with the kiddos,” she said. “We know full-family interaction is best for a child’s development and learning.”

Nicole Atchison of Grafton, Mass., discovered the Amazeum with her son Bryce, age 4, while visiting the area in May. “This is amazing,” she raved, pausing from helping him load foam “packages” on a conveyer built to be scanned for “processing” in the General Mills Lift, Load and Haul space. “We love it! There is so much here for him to do, and it’s all awesome. We don’t have anything like this back home!”

She’s right. There is no way a kid could get bored here. These are just some of the activities and areas the Amazeum offers kids:

Besides other outdoor play areas, the Amazeum has almost a half-acre of undeveloped lawn where families can play and picnic. Inside, the museum also features an indoor cafe for snacks and meals, and a wonder-filled gift shop.

Thanks to a grant from Tyson Foods, most Wednesday nights the Amazeum hosts Priceless Nights, a popular and accessible time when the museum stays open into the evening, and visitors can pay whatever they wish instead of the $9.50 daily admission (always free for members and kids under 2). Family memberships at the Amazeum come with reciprocal or discounted benefits with hundreds of museums nationally, including Mid-America Museum and the Museum of Discovery.

Englebert said, “We want kids to not see technology as something mystical or magical. It’s a tool to solve a problem, a problem they can solve. We want them to be comfortable using tools and materials, understanding that anybody can use them to make something great — anybody.”