Since the February winter storms, the question on all gardeners’ minds has been: “How much damage do I have on my plants?”

Record-low temperatures for an extended period caused some harm. The unusually heavy snow load may have actually been a blessing, as snow is a great insulator. Our first snow was very dry, so plants did not get weighed down too much. Once the snow melted and the temperatures rose, gardeners started assessing their yards, and damage was there. Gardeners were told to wait to see what happens when new growth begins. Now is the time for action.

This has not been our prettiest spring, for sure. Many plants look bad, and some look dead. But new 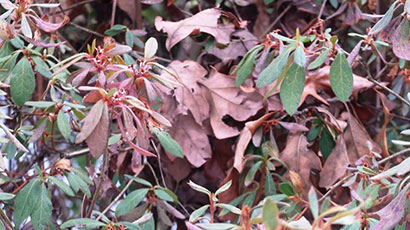 After the February storms, many azaleas have damage. Allow them to bloom,
then prune.

growth should be sprouting now and beginning to cover up some of the damage. We are seeing some blooms on dogwoods, forsythia and azaleas. But many azaleas have damage, and brown has been a major color in the garden for most of March. For some plants, it may simply be some burned foliage, which will get pushed off with new foliage. Some plants may have some tip dieback and will need the damaged parts pruned off. Other plants may have died to the soil line, and unfortunately, some plants may have completely died. Roots are much hardier than top-growth on plants because they are protected by soil. The deep snow provided an extra layer of insulation, so it’s possible some “dead” plants will resprout from the soil line. Begin to take inventory.

Keep in mind that not every plant is going to grow at the same rate. Heat-loving plants tend to be a little slower to get growing in the spring, but by now we should be seeing signs of life or buds beginning to sprout.

How much damage is also going to depend on what you’re growing. Many of us have been pushing the 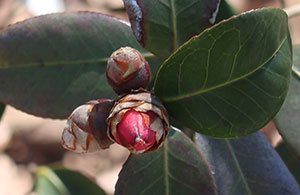 As plants, like camellias, begin to grow, begin evaluating them for replacement or recovery.

limits with marginally hardy plants. Our winters have been milder in recent years, and we got lulled into a false sense of security. Hardy palms, loropetalum, pineapple guava, oleander and gardenias are becoming commonplace in Central Arkansas and even further north. They took a hit.

As plants begin to grow, begin evaluating them for replacement or recovery. Severely damaged plants will not bounce back in a week or two — it will take time. Are the damaged plants a focal part of the landscape 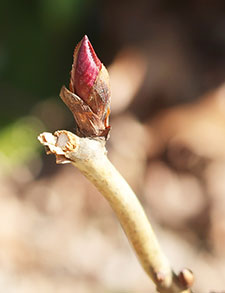 Big-leaf hydrangeas and gardenias (below) will have limited blooms this summer.

that need to be replaced? Or can you live with some holes for a season as they rebound? Consider using larger tropical flowering plants or more annuals to fill in holes as plants recover. As you begin pruning, look for split stems on your branches. Plants that had started to grow in mid-February had sap rising. That sap may have frozen, causing the outer bark to split. Those branches will eventually die. As you see them, start removing them. If you have blooming azaleas, or other spring-blooming shrubs with that damage,

give them the opportunity to bloom, and then prune.

Gardenias and big-leaf hydrangeas will have limited blooms this summer. Both set flower buds in the fall, and if they get frozen back, those blooms are gone. Some of the newer varieties bloom on new wood as 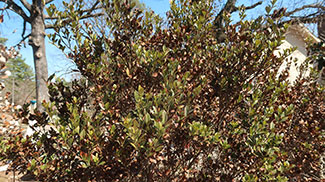 well as old, so we can hope for some smaller flowers later. I haven’t seen this much damage on gardenias since the late 1980s and early 1990s. Back then, it was not unusual for gardenias (and figs) to freeze to the ground annually.

If you are replacing heavily damaged plants, review your replacement options. Consider diversity, and try something new.

The winter storms of 2021 will be talked about for years. And at least for this growing season, we will have plenty of reminders in our gardens. Don’t let one bad season get you down. Garden centers are ablaze with color now, and there are so many great plants to try, so get planting!