The original Stoby’s Restaurant opened in Conway in 1980, and in 1984 a Russellville railroad parlor car location was dedicated. The railroad theme proved so successful that an attached depot building was added in 1986, and happy customers have been getting their tickets punched and taste buds tantalized ever since. 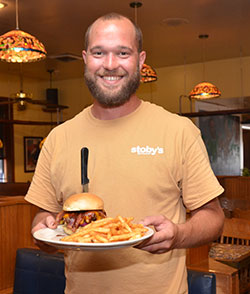 Manager David Cooke directs the crew at Stoby’s of Russellville.

“The railroad theme brings in lots of young customers, but we are always surprised at the huge smiles on the faces of our grown-up customers,” said David Cooke, manager of Stoby’s of Russellville.

Whether customers choose to dine in the train car or in the depot area, they are treated to a fun atmosphere and great service. The depot dining area has a model train that runs on an elevated track around the entire area, to the delight of patrons. Prior to entering the restaurant visitors can announce their presence with a train whistle that was used on a commuter train in Chicago. 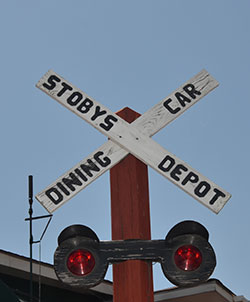 construction of the Little Rock and Fort Smith Railroad that came through the town in 1873 led to the town’s rapid growth.

David Stobaugh, owner of Stoby’s, said the restaurant’s recipes were developed from a cross-section of suggestions from friends and experiments. Stoby’s menu began with one offering, The Stoby, which launched the restaurant’s success.

The Stoby sandwich remains the No. 1 seller. It has your choice of three meats and two cheeses, topped with a secret dressing, juicy tomato and crisp lettuce on your choice of bread. You simply can’t go wrong with this Arkansas classic. 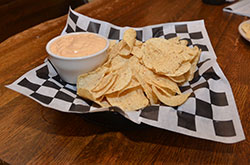 Stoby’s Original Cheese Dip is legendary and a favorite of thousands. The thick, rich dip is made with 100-percent real cheese and is a treat for cheese dip lovers. I have made a meal of the dip on many occasions. According to Stobaugh, a generation of customers grew up eating Stoby’s cheese dip as infants and still crave it today.

The Seasoned Beef Taco Salad is another crowd favorite. This huge offering features lightly spiced ground beef loaded on a bed of crisp lettuce with chopped tomatoes, red beans, a blend of fresh cheeses and chopped olives. It is served with Stoby’s salsa, warm tortilla chips and the fabulous Stoby’s special taco salad dressing. This is not a fast-food chain salad; it is a culinary work of art that packs a barrage of flavors. Stoby’s taco salad dressing is absolutely one of the best I have ever had. I could drink it with a straw. 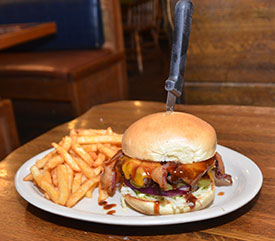 The Half-Pounder Western Burger is a burger lover’s dream.

If you are a hamburger lover, then you must try Stoby’s Half-Pounder Western Burger. This handcrafted, beef creation is definitely a “two-hander.” The team at Stoby’s tops the cooked-to-order beef patty with melted cheddar cheese, two slices of thick-cut bacon, drizzles it with a homemade hickory barbecue sauce and then lovingly places it on a bed of fresh lettuce, sliced onion, pickles and sliced tomatoes. It is nestled between fresh buns. The burger provides a cornucopia of flavors that are sure to please. 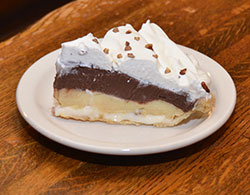 The Possum Pie is a Stoby’s original creation.

Cooke grinned and asked me if I wanted to try the Possum Pie. He said that it is only available during “Possum Season” and I was in luck as it is always possum season at Stoby’s. The Stoby’s bakers layer sweetened cream cheese, pecans, homemade vanilla and chocolate cream fillings, then top the layers with whipped cream and pecans in a homemade pie crust. He may have been pulling my leg about the possum season, but he definitely was a straight shooter about the dessert’s goodness. The Possum Pie was a plate scraper. I ate the whole huge piece.

Stoby’s Conway location was destroyed by a fire in 2015, but Stobaugh said plans are underway to rebuild. In the meantime, due to public demand, a temporary drive-through location has been opened to serve the Conway area.

If you are on a trek for a great destination dining experience, visit Stoby’s Restaurant in Russellville and enjoy some classic Arkansas food.