If you’ve ever ventured out to the Perry County hamlet of Wye to see the beautiful daffodils in bloom along scenic Arkansas 113, you might just wonder how they got there.

The story goes back to the 1920s when traveling to Wye took great effort on washboard dirt/gravel roads. Wye’s Evangelical United Brethren Church (EUB) served but a handful of close-knit souls. Lacking a proper church, members met in a schoolhouse. Among those faithful were carpenter Austin Harmon and his wife, Bessie, who moved there from Missouri in the 1920s. They began a modest fruit orchard, producing mostly apples and pears.

Times were tough enough, but soon they’d worsen as the nation entered the Great Depression. Yet, the Harmons and their neighbors had faith God somehow would provide for their needs. Judging by the minor miracle that soon transpired on a 7-acre plot, rented from the church by the Harmons, it now seems their faith was not misplaced.

As the Great Depression dawned, the Harmons sought some reliable means to sustain themselves and the tiny EUB church. Only a steady income could ensure such a rural church’s survival.

Inspiration came in 1927. As Austin Harmon journeyed into Little Rock to buy provisions, one of his stops was Hackett’s Feed Store, then a popular fixture in the west end of the city’s ornate Arcade Building, near Seventh and Center streets. The store proprietor’s offerings included a leftover half-bushel of Dutch daffodil bulbs, which he offered gratis to the Harmons. His only request? Harmon must return the next spring at least half as many daffodil bulbs as he took.

The Harmons saw those bulbs as a providential sign. Aided by grandson Charles U. Harmon, they dug furrows among their fruit trees. For three weeks, they vigorously planted bulbs.

To their amazement, the field proved to be prolific when spring arrived.

The Harmons cut hundreds of the fresh, dewy, yellow blossoms and then headed to Little Rock to sell them to passengers at the depot for a dime a dozen. That yielded revenue sufficient to sustain the struggling congregation and to return the borrowed half-bushel of bulbs to Hackett’s, with interest!

By 1948, the Harmons had a bumper crop of blooms. They separated and transplanted enough bulbs to make an abundant 65 bushels. And they even took their bouquets to the rails.

The way to heaven

Bessie later recalled for a curious reporter how they sold fresh flowers to Memphis and Shreveport railroad travelers. They also contracted to sell blossoms in TG&Y stores in Tulsa and Kansas City.

By 1958, floral success let the Harmons move into a modest cottage near the church, amid the flowery field of King Alfred, Empress and orange-hued Suzy blossoms. To their new home they added a plaque that read: “A place to stop. On the way to heaven.”

Visitors enjoy the peaceful setting of acres of daffodils at Wye Mountain. photo by Sheila Yount

Word of Wye’s “minor miracle” gradually spread. Some began, as annual tradition, an early-spring pilgrimage to revel on the hillside and pick a few blossoms. The church gladly received visitors’ free-will offerings.

When Austin died in November 1965, it fell to an aging Bessie to carry on their loving tradition.

A Little Rock newsman then, I first heard of the field in 1974 when a friendly rival newspaper colleague urged me to try a family outing to Wye. She offered directions, but ONLY if I promised “never to write about” the fields. Once publicity hit, she feared, visitors would troop out Arkansas 10 and 113, descend on the field, and trample Bessie’s blossoms. If that catastrophe were to happen, the golden miracles might fade forever.

I gladly agreed then I’d not write the story … then.

With my wife and sons, I drove out to meet Bessie and bask awhile in her warm smile. She was delighted to share her recollections of how she and her late husband helped preserve their little church, which had by then merged into the larger United Methodist faith.

Bessie told me how she enjoyed seeing families, young and old, wending their way among her blossoms. If they picked a few, Bessie approved. Donations, while appreciated, were not required.

“After all,” Bessie told me with a grin, “in all my years here, I’ve never seen our field picked clean!”

Another newsman had taken no such vow of silence. He learned of the field and published a Page 1 story that sent many flocking west to the site.

My colleague’s prediction came true. In a week, hordes descended. To Bessie’s astonishment, some not only picked her field clean but also brought along spades and dug up her precious bulbs!

By 1977, the Harmons’ field faced destruction. That’s when a dozen churchgoers stepped in and organized an annual Wye Daffodil Festival. A new roadside fence shielded fragile fields. Visitors still were welcomed, but any bulbs taken had to be bought. Proceeds helped maintain the church and pay a preacher for a congregation of 50. 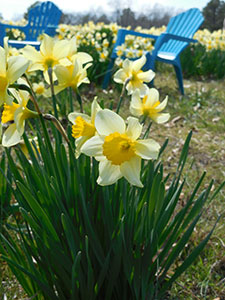 Her beloved Wye community bid Bessie goodbye in February 1985, just as the first of her new blossoms emerged. She was 95.

The Harmons’ great-grandchildren since have carried on the tradition, and the local Extension Homemakers’ Club conducts annual crafts fairs. People are allowed to pick daffodil bouquets, and when available, bulbs are sold by the church. All sales benefit the church.

This year’s festival is set for March 3-11.  visit fb.com/wyemountainchurch.

Jerry Dean, a Little Rock native, is a veteran journalist who worked at the Arkansas Gazette as a reporter and later the Arkansas Democrat-Gazette. He now resides in Tennessee.