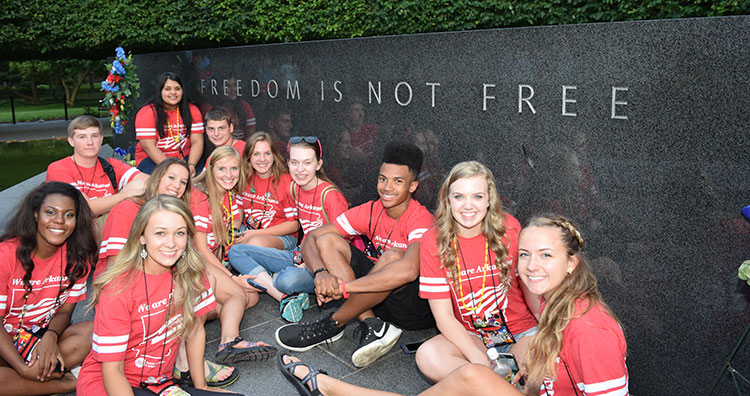 On June 8-16, I had the honor of leading 43 Arkansas high school students to Washington, D.C., for a week-long tour of our nation’s capital. It was my 15th Youth Tour overall and the 14th one as the tour director for Arkansas.

Our chartered bus was full for the 2016 Youth Tour, and the students were up early and ready to go on June 9. The night before we had orientation and a welcome dinner at the electric co-ops’ Little Rock headquarters where we introduced ourselves and heard from Austin “Mack” Chambers, a World War II veteran and First Electric Co-op member who had attended an Honor Flight to Washington in 2014 co-sponsored by the electric co-ops. Chambers and his daughter Mariglen Manasco, who served as a guardian on the Honor Flight, helped introduce the theme of the Youth Tour — “freedom is not free.”

The road to Charlottesville

The first full day of the trip was the longest travel day of the tour as we drove from Little Rock to Knoxville. We watched movies, played “Co-op Trivia” and visited with each other along the way, stopping for lunch at Jackson, Tenn., before arriving in Knoxville for the evening. The next morning, we drove into Virginia, stopping at the Welcome Center in Bristol, Va., for photos and a break. From there we drove through the beautiful Virginia countryside to Appomattox Courthouse, the historic site where Confederate Gen. Robert E. Lee surrendered to Union Gen. U.S. Grant, ending the Civil War 151 years ago in April. 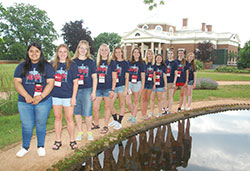 At the reflection pond in front of Monticello.

Next was a short drive to Charlottesville where we spent the night in anticipation of a tour of Monticello, the home of President Thomas Jefferson. Again, we were up early that Saturday morning for the tour of Jefferson’s beloved home and plantation. From there, it was lunch at the nearby Michie Tavern, where we dined in Colonial style with pewter plates and cups and delicious Virginia fried chicken. After our meal, the students toured the tavern and learned to do the “Virginia Reel” dance.

We arrived late Saturday afternoon to check into our hotel in Arlington, Va. Then, the tour was truly on. That evening we visited the Franklin Delano Roosevelt Memorial and then walked around the Tidal Basin to the Jefferson Memorial, a fitting way to end a day that began at Jefferson’s home. 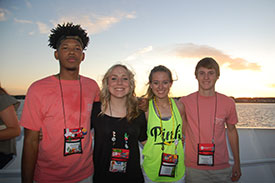 Students enjoy a boat cruise along the Potomac River.

On Sunday we had another full day, starting at Mount Vernon, the home of George Washington, at Alexandria, Va. Next, we drove south to Quantico, Va., to the National Museum of the Marine Corps where we learned about the sacrifices U.S. Marines have made for our country throughout its history. That evening, after dinner and a break at the hotel, we joined students from other states for a cruise of the Potomac River aboard the Spirit of Washington boat. 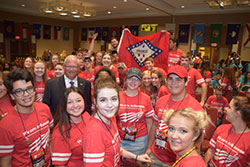 Monday’s schedule included the Youth Day program hosted by the National Rural Electric Cooperative Association (NRECA), where about 1,700 students from across the nation attending the tour gathered to learn more about the cooperative program. Arkansas’ own Mel Coleman, president of NRECA’s board and chief executive officer of North Arkansas Electric Cooperative, spoke as part of the program and also visited with the Arkansas group, even joining us as we “called the Hogs.” We also cheered as Caleigh Pickard of Cabot introduced herself as part of the Youth Leadership Council. Pickard, sponsored by First Electric Cooperative, was chosen by the 2016 Youth Tour chaperones to serve on the council as Arkansas’ representative.

From there, we visited the Newseum, which chronicles the history of America’s news media, before we headed over to the U.S. Holocaust Museum. That evening, we walked together as a group to visit the World War II Memorial, the Lincoln Memorial, the Korean War Veterans Memorial and the Vietnam Veterans Memorial. 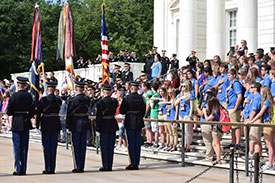 Youth Tour delegates, dressed in blue shirts, at the Tomb of the Unknown Soldier in Arlington National Cemetery.

On Tuesday, Jeanne Fogel, a renowned Washington tour guide and historian, led us as we visited Arlington National Cemetery, the U.S. Capitol, the Supreme Court and the Library of Congress. At Arlington National Cemetery, we arrived in time to watch the famous Changing of the Guard ceremony and then, by a stroke of luck, we were able to witness a special wreath-laying ceremony in honor of the U.S. Army’s 240th birthday. The Army was created on June 14, 1775. While at the U.S. Capitol, students visited with members of Arkansas’ congressional delegation and also had their photos taken with the lawmakers.

The tour continued on Wednesday with a visit to the National Museum of the U.S. Navy at the Washington Navy Yard before heading to the National Mall to tour the “big three” museums of the Smithsonian Institution — the American History Museum, the Natural History Museum and the Air and Space Museum. After a short break at the hotel, the students attended the farewell event, which included a dinner and dance with students from other states.

The next morning it was time to pack up and get ready to head home from Reagan National Airport via Delta Airlines. For many it was the first time they would fly on an airplane, a fitting way to end a trip of many firsts. Our American journey was complete, but the impact of the trip will last a lifetime. 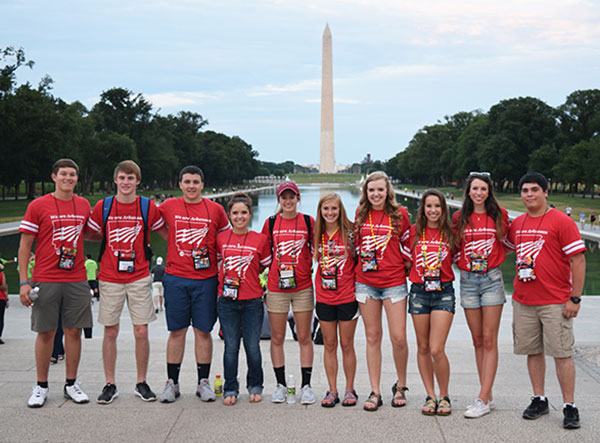 In front of the Reflecting Pool, with the Washington Monument in the distance.

Delegates from the 2016 Electric Cooperative Youth Tour shared these comments about the trip:

“Youth Tour 2016 meant the world to me. It was one of the best trips I’ve ever experienced. It truly taught me to appreciate what we have so much more now. From standing in front of the Vietnam Wall to watching the Changing of the Guard in front of the Tomb of the Unknown Soldier, I couldn’t help but feel humble. I can’t thank God enough for allowing me to live in a country where we have as much freedom as we do. I will always be thankful that I get the privilege of living in the United States.”

“My experience of the trip to DC was one of a lifetime. My favorite part of the trip was visiting the Arlington Cemetery. It reminded me that freedom is not free. Looking out on the land full of tombs of those who gave their tomorrows so that we can have freedom today was truly life-changing. Most of all, I will never forget the amazing friends that I made that week.”

“The most profound memory I had of Youth Tour happened the night we arrived in Washington, DC. Our group had just visited the Jefferson Memorial, and I was waiting outside the memorial with my friends. As the sun was setting and its light was hitting the Washington Monument, I was taken aback. Right then it hit me that I was standing in the nation’s capital. I was surrounded by history, and I was at the foot of a memorial for an American legend. In that moment, I was proud to be a Youth Tour attendee, and I was proud to be an American. I hope I never forget that.”

“Youth Tour 2016 changed my life forever. Going to the Arlington Cemetery was one of my favorites. Seeing the special ceremony of the Army’s birthday was amazing. It was very sentimental that morning. Four words have stuck with me since the trip; “freedom is not free.” I learned on the trip that our freedom is not free. The men and women had to fight for our freedom and they still do. I’m so glad I got to experience this trip. I made a lot of great friends and enjoyed touring the different places. I will never forget this trip.”

“By far my favorite part of Youth Tour was Arlington National Cemetery. It was there that I realized that freedom is not free. I had to fight back tears as I gazed upon the endless rows of headstones. I swelled with gratitude, and I had never felt more proud to be an American.”

“This trip was truly humbling to me. I’ve read about these events and places in books my whole life, but once you get there and see the memorials it hits you, these aren’t just facts in my history books; these things actually happened. People died so that I could enjoy the life that I live. Their sacrifice made this trip possible for me, and I will be forever grateful to each and every one of them. It was an eye-opening trip too. The bus ride up, going through states made me realize that the United States is huge and beautiful. Also Washington DC is a lot bigger than my little hometown, and it has a whole lot more people. I’m very fortunate to have been able to go on this trip and meet some amazing people who will be lifelong friends.”

“It was a wonderful and unique trip. I gained lots of knowledge about DC and its history. Also, I’ve gained a bond with the staff and other students that went with me. What inspired me the most were the museums and memorials because it helped me understand what the U.S./worldwide countries had to go through to get to what they are today! The highlight of the trip was the boat ride and farewell dance.”

“The highlight of the trip for me was having the opportunity to meet new people who by the end of the week became very close friends with me. I will always remember the trip mantra of  “freedom is not free.” I truly began to understand it more when I got to see the war monuments and see artifacts and read stories of people’s lives and experiences. I will never forget this nation’s history, and this trip allowed me to see many places that are rich with history, and I am very thankful that I got the opportunity to represent Arkansas and First Electric.”