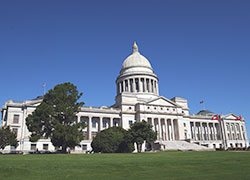 Editor’s note: On Jan. 9, lawmakers from across the state will arrive at the Arkansas State Capitol for the 91st General Assembly. Arkansas Living is pleased to share an article from our interview with Speaker of the House Jeremy Gillam about what he sees for the upcoming session. And on page 18, Kirkley Thomas, vice president of governmental affairs for the state’s electric co-ops, shares his views about potential issues, including those specific to Arkansas’ nearly 1.2 million electric co-op members, during the session.

An interview with Speaker of the HousJeremy Gillam

As in past sessions, Speaker of the House Jeremy Gillam, R-Judsonia, expects education to be a “big focal point,” along with the state budget, of the 91st General Assembly, set to begin at the Arkansas State Capitol in Little Rock on Jan. 9.

“There are certain rhythms that are consistent in all sessions,” Gillam said during a recent interview with Arkansas Living.

Here are his thoughts on those issues and others that are expected to be considered this session.

Education: Gillam said he would like to see the implementation at K-12 levels of professional learning communities, which are part of an educational program where groups of educators work collaboratively to improve educational offerings and academic performance of students. He added that it is important that the “structure and systems within education are aligned” to better help prepare students for the workforce, as well as college.

As for Gov. Asa Hutchinson’s proposal to change the higher education funding model to one that is based on student performance rather student enrollment, Gillam said it is important for it to be structured correctly. He added that the structure must “protect the very different and important missions” of the two-year and four-year colleges in the state.

Tax reform, budget:  Gillam noted that there “are a lot of competing philosophies right now” on how to approach tax reform and the budget. Hutchinson has proposed cutting taxes by $50 million in 2017 as a follow-up to a $103 million tax cut in 2015. In considering that proposal, as well as others, Gillam said the Legislature must decide whether to do “true systemic reform” that simplifies the tax code and aligns tax policy to help create jobs or continue with a “piecemeal” approach. As for the budget, lawmakers must decide what the state’s priorities are.

“We can no longer keep saying we want to keep reducing revenues but have a mindset that service levels and those expenditures at that level stay the exact same because that’s math,” Gillam said. “That doesn’t work.”

Health care: Asked about President-elect Trump’s promise to repeal the Affordable Care Act (ACA) and how that would impact Arkansas, Gillam said it is too early to know. “I think any change that is made at the federal level will have a significant impact on what we are doing here in Arkansas with our programs and our budget as well,” he said. Not knowing specifics of a Trump proposal will cause “some difficulties logistically,” Gillam said, adding that any federal changes could require the Legislature to stay in session longer than expected or to even come back in a special session to make any necessary changes to the “Arkansas Works” program, which was created in response to the nation’s ACA, better known as “Obamacare.”

Medical marijuana: On Nov. 8, Arkansas voters approved the Arkansas Medical Marijuana Amendment, also known as Issue 6, legalizing marijuana for medical use in Arkansas. How to implement the amendment will be one of the major issues lawmakers face during the 2017 session. Gillam said, like a lot of issues they must grapple with, the amendment’s requirements are “very nuanced and complex when you dive into it.”

One pressing concern, he said, is that the timetable in the amendment is unrealistic and will be “systemically almost impossible for us to meet.” As a result, Gillam said lawmakers will have to change the timelines, as well as address the formation of a commission to oversee the program. And, finally, he said the question over how to implement the amendment when marijuana is still illegal at the federal level must be answered. “We are going to have to be very cautious about how we move forward on this and make sure that we do so in a responsible manner,” he said.

Broadband development: Another issue of importance to Hutchinson has been the development of broadband in the state, especially in rural areas. Asked what plans the Legislature might be considering regarding broadband development, Gillam responded that he believes there will be “some initiatives that we are going to be able to put forth to the House and the Senate that will be able to move the state forward in this regard.” He also praised the efforts of Ouachita Electric Co-op based in Camden, which is partnering with South Arkansas Telephone (SATCO), to form a new company called ARIS to bring gigabit internet service to thousands of homes and businesses in south Arkansas.

“I think it showed a lot of creativity among the provider community and from the co-ops in being able to identify a problem and realizing that there was a mutual beneficial solution that existed and both parties agreeing to put that above all else …,” Gillam said. “They didn’t view each other as stumbling blocks but rather as potential partners in being able to solve a common problem that exists in the state of Arkansas.”

As lawmakers grapple with these issues and others, Gillam, who is serving in a rare second term as House speaker, said he hopes Arkansans will be patient with them.

“There’s some unreal expectations that seem to exist out there that suddenly a member who has come from one walk of life is going to be an expert in all kinds of other areas that wasn’t their career,” Gillam said. “And so patience and a collaborative spirit with the constituencies and the members will yield a far better outcome for those districts.”