“The foundation of every state is the education of its youth.”

It’s a quote from Greek philosopher Diogenes, shining in the June sun below an ornate window in the Library of Congress.

It’s also the mission behind Youth Tour, the very reason we — eight adult chaperones and 43 students from around Arkansas — are in Washington, D.C., for the better part of a week, June 15-20.

Since the 1950s, the Electric Cooperative Youth Tour has brought high school students selected by their local electric cooperatives to our nation’s capital for an up-close look.

A late Friday afternoon Little Rock hotel check-in precedes a dinner of hot dogs and hamburgers, a magic show and an orientation that teaches students about the cooperative model, their chaperones and each other.

The 10 young men and 33 young women are asked to share a bit about themselves, what they’re looking forward to experiencing in D.C. and what’s the farthest they’ve ever been from home.

The accomplished group includes sports participants, animal enthusiasts, dancers and singers. They’re involved in everything from 4-H to quiz bowl.

Anna Neal of Salem (North Arkansas Electric Cooperative) says, “The thing I want to see most in D.C. is the Korean War Memorial because my grandpa was a Korean War vet.”

Group jokester Justin Richmond of Mena (Rich Mountain Electric Cooperative) has this answer: “What I want to see in D.C. is all your … beautiful faces having a great time.”

The time we’re supposed to depart for the Bill and Hillary Clinton National Airport on this Saturday: 5:30 a.m.

The time we actually depart: 5:20 a.m. It’s early, but everyone — dressed in the matching tour T-shirt of the day 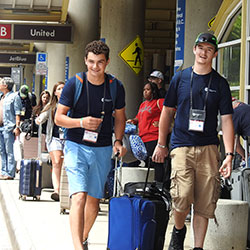 — is so excited for the trip, we’re 10 minutes ahead of schedule.

Says Chelsea Riley of Hamburg (Ashley-Chicot Electric Cooperative), about her first plane ride: “I was terrified. The takeoff and the landing — that was scary. But once we got in the air, I was fine.”

While students have a rare bit of downtime, chaperones interview six finalists for Youth Leadership Council. We 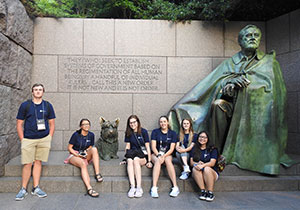 We work off dinner from Crystal City Sports Pub with a sunset walking tour of the Martin Luther King, Jr. Memorial, the Franklin Delano Roosevelt Memorial and the Thomas Jefferson Memorial along the Tidal Basin as some swimming geese keep us company.

Also keeping us company: Some of the 1,500 Youth Tour students from other states. With — squeal! — tradeable 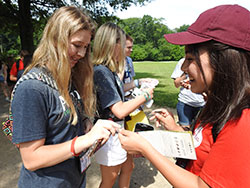 Arkansas Youth Tour delegates swap pins and stickers with students from other states.

state pins! Each group carries pins to swap with teens from other states and wear on Youth Tour lanyards.

We officially have a group cheer, courtesy of animated Austin Hill of Earle (Woodruff Electric Cooperative). It goes like this:

Whatcha think about (fill in the blank with activity/place/person)?

Our first full day in D.C. has quite the full schedule, beginning with a 9 a.m. trip to George Washington’s Mount Vernon estate.

We explore Washington’s elaborately decorated 18th-century mansion and pay visits to his tomb and the Slave Memorial.

We take in a 4D movie — complete with a welcome “snow” storm on this hot day — about Washington’s military victories and see exhibits on everything from Washington’s marriage to Martha to his problematic teeth.

Washington’s dentures — which were not wooden, but made from human (!) and animal teeth and metal — were particularly fascinating to some students.

“They didn’t have Sensodyne (toothpaste) back then,” says one with a shrug.

Allee Southerland of Benton (First Electric Cooperative) says, “I really loved Washington’s house and seeing his tomb — that was crazy to me that we were standing right where the father of our whole country was buried.”

After Mount Vernon, it’s time for students to catch a Major League baseball game at Nationals Park, where the 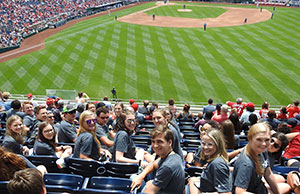 Washington Nationals crush the Arizona Diamondbacks with a 15-5 win (“Ouuuuuuutstanding!”). The game is a definite “hit.”

Next is a quick trip to 1600 Pennsylvania Ave. to see — and take selfies in front of — the White House. Students are in awe of the structure, as well as the armed female Secret Service agent in front of the gate.

After riding in buses and planes, it is time for a boat. Along with delegates from other states, Arkansas students end this Sunday on a sunset cruise of the Potomac River aboard the Spirit of Washington, where there’s dinner and dancing and yet more pin-swapping.

This Monday morning begins with a walking tour of the World War II Memorial, the Korean War Veterans 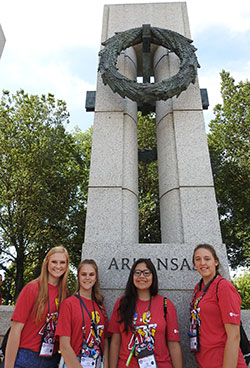 Memorial, the Lincoln Memorial and the Vietnam Veterans Memorial.

The last one is especially poignant. It’s the day after Father’s Day, and the black granite wall, etched with more 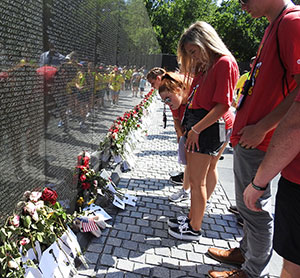 than 58,000 fallen heroes’ names, is covered with roses and personal letters.

It’s moving for Jalynn Brown of Camden (Ouachita Electric Cooperative): “The Vietnam Memorial was kind of hard to walk through because my papaw actually fought in Vietnam. And we were really close.”

Poignancy and patriotism continue into the afternoon with a tour of Arlington National Cemetery, where the group is mesmerized by the meticulous Changing of the Guard ritual at the Tomb of the Unknown Soldier.

There’s time to take in — and take photos of — the U.S. Marine Corps War Memorial before a visit to the stirring National 9/11 Pentagon Memorial.

While students on the trip were born after Sept. 11, 2001, they’ve heard from their parents and teachers about the day’s tragic events. The 184 lives lost in the 9:47 a.m. Pentagon attack are represented by benches surrounded by crape myrtles and a reverent stillness.

About the memorial, Chloe Spann of Benton (First Electric Cooperative) says, “That’s history that’s happened recently, and I thought they did a beautiful job of displaying that. … To stand right where that happened is really, really touching.”

Dressed in “Keeping it Rural” T-shirts, students arrive at the National Mall for a day of touring the museums of the 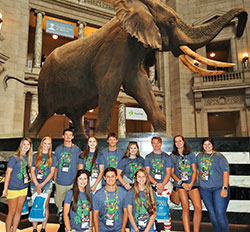 A trip to the National Museum of Natural History, where a 14-foot-tall African bush elephant greets guests, offers tons of fun.

The latter, says Katherine Newman of Salem (North Arkansas Electric Cooperative), “was my favorite thing about being here. … How the museum went from all the way back to the 1400s to now and the different things people had to go through and where we are today. It was just outstanding and amazing.”

Wyatt Forthman of Arkadelphia (South Central Arkansas Electric Cooperative) says the Air and Space Museum “has been at the top of my bucket list. … Since I was little, I’ve always liked airplanes and spaceships. … It’s just cool to finally be able to see them in 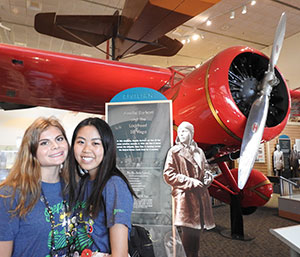 Cerise Stanley (left) and Irene Huang, both of Bentonville, learn about Amelia Earhart and her Lockheed 5B Vega at the National Air and Space Museum.

Maya Fant of Nashville (Southwest Arkansas Electric Cooperative), who turns 17 on this day, says exploring the

natural history museum’s butterfly and ocean exhibits with new friends made for an unforgettable experience: “It was probably my most memorable birthday.”

Our Tuesday afternoon also includes a reservation at the National Archives to view original documents, including the Declaration of Independence, the Constitution of the United States and the Bill of Rights. Between the time-worn paper and the crowds, it’s difficult to make out much of the writing, but, sure enough, “John Hancock” is still prominent.

Dinner at Union Station, with a variety of food vendors, offers students a chance to eat something they can’t have at home … or, well, Chick-fil-A, as many ultimately select.

Union Station is just a short, rainy walk from our next destination: the U.S. Capitol. We’re given a personal 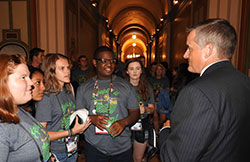 A rare evening tour of the capital with Rep. Bruce Westerman.

Pointing up to the dome inside the Rotunda, Westerman says, “You can put the Statue of Liberty in here, and the torch wouldn’t touch.”

A student asks, “How long does it take to get up there?”

Westerman replies dryly, with a laugh, “Depends how good you are at climbing stairs.”

Soon after, staff members rush in, interrupting the tour: Westerman must go vote! 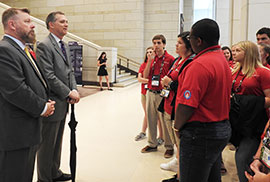 But, it’s OK with the students, who are led to the gallery above the bustling House floor, where they are given a rare front-row seat to the action.

“Seeing that unfold was so amazing,” says Jacob Jarding of Garfield (Carroll Electric Cooperative) about the activity one usually sees on C-SPAN. Except on C-SPAN, no lawmakers give welcoming waves as they do to the students.

The group will meet plenty of other lawmakers before the day is over. 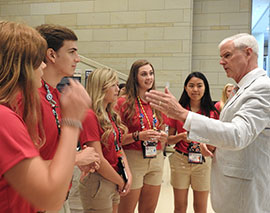 Womack, who presents commem-orative coins to the students, also has some advice for them: “Work hard in school. … Make good decisions. … Take care of your health. … Check your heart: Do you have a spirit of community?”

He closes with a final action point: “One other thing, make your 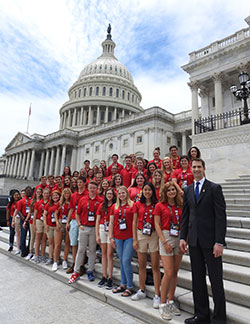 Following a brief stop to see the Supreme Court and another meal at Union Station, it’s back to the sunny Senate stairs to pose with Sen. Tom Cotton.

Cotton asks about tour highlights (“seeing the Capitol,” “going to the baseball game”) and lowlights (“no sleep” and “sweat”).

“We’re from Arkansas. We should be used to that,” he says

about the heat. “This is like a spring day in Arkansas!”

After the Capitol, we get a glimpse of the Library of Congress followed by a visit to the somber United States Holocaust Memorial 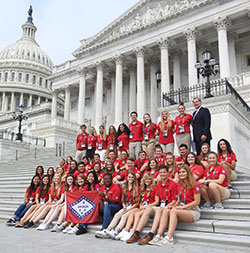 For their last night in town, students attend a Youth Tour Farewell Event at the Newseum. Speaking of the Newseum and farewell events, the interactive news museum will close by the end of the year. 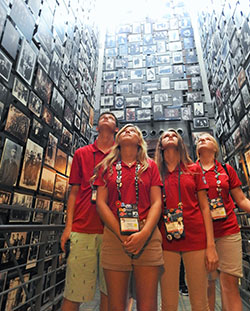 Home. It’s not only what it says on our bright orange tour shirts with the shape of the state of Arkansas as the “O” — it’s where we’re headed.

We leave at 5:45 a.m. this Thursday to head back the way we came. This time, everything is going fast. Maybe 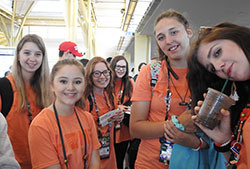 In a short time, we’ve done so much and have become so close with our Youth Tour family. We vow to keep in touch via social media before we head our separate ways, promising we’ll never forget this experience.

“Youth Tour helped me to appreciate the difference in communities across Arkansas and the experience each person brought to the table. We may have been from completely different towns or cities, with different beliefs and interests, but in the end, we’re all Arkansans.”

“Personally, it changed my life. I gained more respect for our country. I learned that true friends don’t always go to your high school.”

“I enjoyed getting to walk around D.C. with some of the coolest people I’ve ever met and become lifelong friends with them. It has let me learn all about our … history and feel a connection with our nation.”

“My experience at Youth Tour has expanded my understanding of people and the places they come from. In addition, Youth Tour has sparked my curiosity to learn more about our nation’s history and the sacrifices made for freedom.”

“This Youth Tour has changed my life in such a way that is hard to describe. I used to just go to class and be like, ‘Oh, all this is the past. Why would I actually care?’ But going on this trip and actually getting to experience all this history … has changed my outlook on school and opened my eyes. I’ve enjoyed walking around our nation’s capital and learning.”

“Youth Tour has allowed me to see that getting to know new people is easier than you might first expect.”

“I personally enjoyed seeing the National Archives and our founding documents … as I had only seen replicas. … Seeing these documents in person was very eye-opening.”

“Youth Tour allowed me to see the national documents and artifacts that shaped and formed the United States, all while experiencing with newfound friends.”

“I am very proud of our country, and I appreciate everyone who has served in the military. I am so much more patriotic than before. I love our country!”