Social distancing — avoiding close contact with others to minimize the spread of disease — has limited our physical proximity to one another during the coronavirus pandemic.

Still, in other ways, it has brought Arkansans together.

Since March, the state has seen the temporary closing of every possible gathering place, from schools, workplaces and gyms to dine-in restaurants, salons and churches.

Due to state park restrictions to curb crowding, even some natural havens have been off limits — and on the 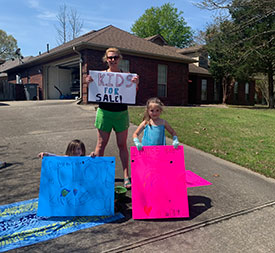 Katie Beth Hand and family cheer on a parade of Bryant School District teachers who drove through neighborhoods to wave at children after the school year was disrupted by the coronavirus.

most glorious of spring days. Sporting and cultural events have been canceled. So was much of “normal” life.

And during this time marked by illness and isolation, people have found kind and creative ways to care for others.

Beginning with teachers, Gov. Asa Hutchinson initially closed schools March 15, hoping they’d reopen in a few weeks. But on April 6, he announced school buildings would stay shuttered through the remainder of the school year.

Educators, tasked with providing alternative methods of instruction, have continued connecting with their students in not just professional, but personal, ways. Teachers all over the state — from Blytheville to Bentonville to Bryant — organized drive-by parades to honk and wave at students and parents.

Katie Beth Hand, along with her children and nieces and nephews, cheered on Bryant School District teachers who drove down her street. Her signs for the teachers: “KIDS FOR SALE!” and “I MISS YOU EVEN MORE THAN THEY DO.”

Hand says, “It meant so much to the kids to have the teacher parade. … When my kids’ teachers came by, they yelled at my kids — it made them feel like they were being greeted by a celebrity! What I said on my sign was only half joking. My kids miss their teachers so much, and so do I! I have gone from being a working mom to being a working-from-home mom, chef, teacher, basketball coach, ballet teacher, counselor and friend.”

Hand says she hopes, while her children’s traditional education has been interrupted, that this time teaches them something valuable: “Our goal is for our kids to remember these days for the good things they brought. … I hope they will be able to look back on these ‘quarantine days’ and see the love and effort that so many people have put into helping and encouraging others.”

Food for the soul

The restaurant industry was also in dire need of help and encouragement. To slow disease spread, state restaurants and bars were ordered to stop dine-in service as of March 19.

Jonesboro’s Young Investment Company LLC, owned by Joe Clay Young IV, waived its restaurant customers’ April rent, saying, “We ask that you use this money instead to pay your employees and take care of your family. Stay strong. We will get through this together!” The gesture received widespread national attention, with President Donald Trump retweeting an article about Young, saying, “Great story. Thank you to Mr. Young of 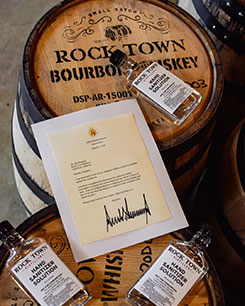 Another Arkansas business that got a presidential shoutout: Little Rock’s Rock Town Distillery for making hand sanitizer to donate to hospitals and first responders and sell to the public. Trump not only mentioned the business in a press conference, he sent owner Phil Brandon a letter: “Your unyielding dedication to keeping our country healthy and safe as we face these hardships is a testament to the resilience of the American spirit.”

Although restaurants have been among the hardest-hit businesses during this crisis, many are giving back themselves. Countless are the stories of Arkansas eateries donating sandwiches, milkshakes and enchiladas to health care workers. Restaurants also have joined forces with school districts and charitable organizations to provide meals for students during school closures.

While Arkansas food businesses like Springdale-based Tyson Foods have made large-scale donations, citizens have donated to food banks and food pantries. And Little Free Pantries.

The Little Free Pantry — a grassroots effort of people feeding people by stocking free pantry boxes in neighborhoods — was started in 2016 by Fayetteville’s Jessica McClard. An avid reader and runner, McClard says she modeled the program after the Little Free Library in an effort to help people experiencing food insecurity. After all, she was once there herself: “When I was a new mom with my first daughter, our household was pretty low-income.”

Four years since she launched the first Free Little Pantry, she estimates in Arkansas there are about 100 free pantries, and there are more than 900 in the world — as far as the Netherlands and Australia. A map, for those with a desire to give or a need to receive, is available at the site littlefreepantry.org.

“There are really some unbelievable things happening in response to the coronavirus crisis, and I’m really, really grateful this kind of platform was in place,” McClard says.

The pandemic has created more of a need. And it also has encouraged a need to give.

“People are good people,” she says.

Feast for the ears 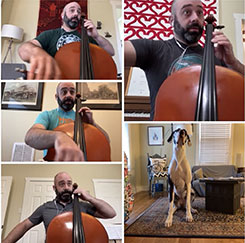 October), concertmaster Drew Irvin still put on a one-man concert. From his home.

He says, “My brain changed tracks. I had been thinking, ‘Tonight I’m playing Aretha Franklin; I’ve got my Pops hat on’ … and I dusted off an old friend. I dusted off a movement of a Bach piece for solo violin. I recorded it, and I posted it around 9 o’clock that night, and I called it ‘Bedtime with Bach.’”

And a new tradition was born. Every day at 9 p.m., an ASO member posts music on Facebook. And not necessarily Bach, Irvin says: “It could be a pop tune, it could be almost anything.”

It’s a way to connect the musicians with Arkansans (and beyond; the effort caught the attention of The Washington Post) now that the symphony canceled all events through May, representing the remainder of its 2019-2020 season.

“We love our audience,” Irvin says. “We love to play live. But right now, the responsible thing is for us to not do that. So, we are grateful that we have technology where we can still reach out to people. And I’ve got to tell you, the response has been touching to me. People are stressed right now because everyone has switched to a different reality.”

As for this “different reality,” Irvin says they’ll perform home concerts through “the duration,” and they’ll look forward to the day they perform again for concertgoers in person.

“The Arkansas Symphony is doing our best to provide something the audience can hold on to,” he says. “Hopefully we’ll see them again as soon as life allows.” 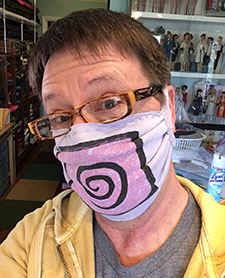 But this year’s spring line includes only one item: masks for health care workers.

“I had looked at all these links at all these hospital workers wearing bandanas, and I found some tutorials that the CDC was putting out. I looked at them, and I thought, ‘I can make that faster and better! I can do this! Let me help!’ So, the next morning, I went right into the studio and began prototyping masks.”

Hughes began making and distributing them and tweaking them based on feedback. As more volunteers joined and others offered their fabric, he assembled kits and made tutorial videos.

“It’s evolved, and we’ve rolled with the punches,” he says. Like shortages. “Elastic became the new toilet paper, and we suddenly couldn’t get it.” He says he reassessed resources: “Here I am in a tourist town full of T-shirts, and I discovered we could make two to three masks out of a T-shirt that was the design the hospital needed to cover their N95 masks and prolong the life. We just started cutting up T-shirts like crazy.”

He and others have donated all the materials and time for the masks — more than 1,500 delivered as of press time — and, he says, they have not accepted payment.

“Like I’ve told my customers, when this is all through, I’ll think about how we’re going to deal with my business and what I’m going to do to pay the bills,” Hughes says. “For now, this is what it is. People don’t often get a chance to use their skills for something like this. … In any other emergency, it’s the fire department or the volunteer whatever, but this time, it’s the seamstresses.

With so many people feeling stuck at home with nowhere to go, some Arkansas neighborhoods got into the “bear hunt” spirit. Families were encouraged to place a stuffed bear — or unicorn, Mickey Mouse, etc. — in the window to delight passersby.

Susan Altrui of Little Rock was eager to put a stuffed penguin in her own window and encouraged her community to do it. No one knows the healing powers of animals more than Altrui. After all, she’s director of the Little Rock Zoo, which has been offering a Virtual Safari program daily at 2 p.m. on its Facebook page.

Sid Gipson of Benton — a Christmas enthusiast with an admitted “inner Clark Griswold” — took the animals idea a step further.

Each December, his Beautiful Lakeview subdivision yard is decked with some 30 inflatables with floodlights on each and Christmas lights (the LED variety, he stresses; he knows he’s talking to an electric co-op magazine) synchronized to music.

Though he, and his wife, Pat, had never decorated for other holidays, she had an idea, which he shared on Facebook: “‘We HAVE to do SOMETHING to help give people hope, bring a smile to their faces, and lift their spirits.’ Then, she said those three magic words that captured my attention and started the wheels turning: ‘WE NEED BLOWUPS!’”

But not Christmas (though people in parts of the state have brought back out the Yuletide lights for a boost of cheer).

Sid Gipson of Benton, known for his outrageous Christmas displays, created his first Easter display to uplift his neighbors.

Gipson enlisted a bunch of blow-up bunnies and colored eggs to greet visitors through Easter.

He says, “We didn’t want to do anything just real big and gaudy — just something that, when people saw it, it just makes them smile. That’s all it was for. It makes the kids excited, and for the adults, it stimulates memories.”

It also stimulates social media. His post has reached people in Australia, England and Ireland.

“It’s something that’s so simple yet so meaningful to a lot of people,” he says. “It’s just really blown up.”