Big as a whale, the C-130 Hercules awes and dazzles visitors to the Arkansas Air & Military Museum at Fayetteville’s Drake Field. They can walk up the plane’s rear ramp into the yawning cargo bay, spacious enough to carry 92 soldiers or a tank and other hardware.

The museum also tells personal stories as captivating as the array of military and civilian aircraft, vehicles, engines and memorabilia. These reflections bring to life famous and less known Arkansans who flew and were otherwise connected with the exhibits — in peace and in war.

One legendary figure is Sam Walton, The Natural State icon who created the world’s largest retail

enterprise. On display is Walton’s first airplane, a two-seat Ercoupe 415-C that the budding businessman piloted from 1954 to 1956.

“He flew this used plane to see prospective vendors and plan out new locations for his early stores,” explains Laci Shuffield, who became the museum’s director earlier this year.

Operating Ben Franklin discount outlets before he opened the first Walmart, Walton figured it was better to survey possible new locations by flying in a straight line at 100 miles per hour than winding along sinuous Ozarks roads at much lower speeds. He continued to fly for decades, upgrading to bigger and better aircraft. 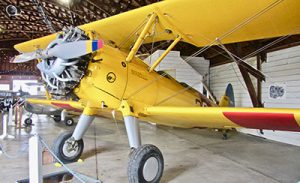 The Boeing Stearman B-17 yellow biplane served as a military trainer during World War II, then later was often used as a crop duster.

as “the second most famous American female pilot of the golden age of aviation.” The most famous, of course, was Amelia Earhart.

A museum photograph shows Thaden being cheered after winning the first National Women’s Air Derby in 1929, having defeated Earhart and other fliers. Thaden said years later, “In an age when some men didn’t think a woman should drive a horse and buggy, much less an automobile, it was a job to prove that females could fly.”

Shuffield observes, with a smile, “The only reason she’s not famous is that she didn’t disappear over the Pacific Ocean,” as Earhart did.

The museum’s P-51 Mustang is only a 7/8th-scale replica of World War II’s premier U.S. fighter. But 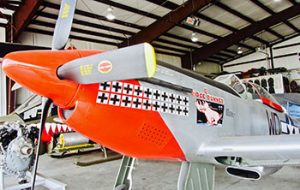 McKennon joined the Canadian Royal Air Force before the United States entered the war in 1941, then transferred to the U.S. Army Air Corps after Pearl Harbor. When his 335th Fighter Squadron got its first Mustangs in Europe in 1944, McKennon named his new plane “Ridge Runner” and painted a razorback on its fuselage.

“He survived being shot down twice,” Shuffield says. “But he was killed in a training accident after the war ended in 1945. He was truly an Arkansas hero, but not a lot of people know about him.”

A less edifying story lies behind the museum’s Stinson S Junior plane, displayed next to an antique 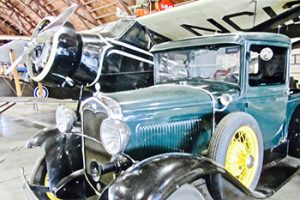 pickup truck. As Shuffield explains, “This aircraft was actually used to bootleg liquor to Kansas during World War II.”

Kansas had remained dry after the end of federal Prohibition in 1933. So the plane’s original owner would load it up with liquor in Arkansas and fly it to Kansas. Trucks like this one would haul it to that state’s military bases.

The wooden hangar that is the oldest part of the complex initially served as headquarters for a World War II aviation training site. It is notable as one of a relatively few wooden structures from the war era still standing in Arkansas.

Shuffield is one of the three paid employees at the museum, which relies a good deal on 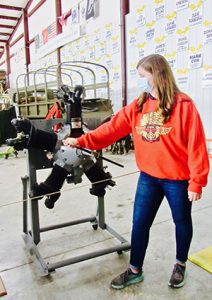 Laci Shuffield, director of the Arkansas Air & Military Museum, demonstrates a radial engine cutaway to show how it works.

volunteers, some of them Air Force veterans. One of their valuable roles is restoring derelict equipment for display.

In normal times, school classes form a substantial part of the museum’s visitor count. Most of those visits have been canceled due to the COVID-19 pandemic, but the museum is conducting virtual visits for homeschooling groups and other online learners. Families are welcome to come in person. Face masks, social distancing and other pandemic precautions are required.

“During these challenging times, we encourage people to bring their lunch and have a picnic,” Shuffield says. “On the weekends, we like to set up tables under the wings of the Arkansas Air National Guard’s C-130, our most popular attraction. That way, people can relax and enjoy the views after they’ve gone through the museum. It’s a special setting.”