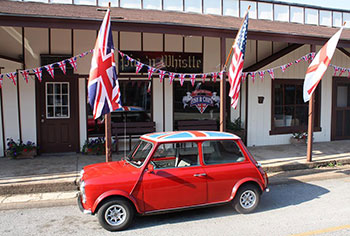 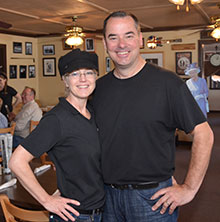 Rebecca and Philip Ashcroft will treat you like royalty at the Pig ‘n Whistle.

Philip and Rebecca Ashcroft opened the Pig ‘n Whistle in May of 2012. Since then, the couple has introduced customers to Anglo-American cuisine and entertained guests with their charming personalities. The couple met while working on a cruise ship, and married in England in 2004. After another six years on the high seas, they decided to dock in Hardy where Rebecca’s family has lived for generations. Philip, a native of Liverpool, England, decided that a British-themed restaurant would be a great concept for Hardy and many of his family’s recipes would be a hit with customers.

Even the restaurant’s name has a British origin, as it is derived from long ago in “Merrie Olde” England where a sign with an image of a pig and whistle indicated an establishment to eat and drink. The couple also likes to tell visitors that the name honors the Arkansas Razorbacks and the trains that roll through Hardy. 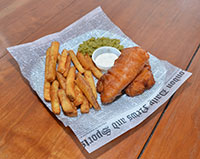 The English Fish ‘N Chips and mushy peas are a traditional British favorite.

The English Fish ‘N Chips is the top seller at the establishment, as it well should be. The dish features freshly hand-battered Atlantic cod, served with chips, “mushy peas” and homemade tartar sauce. The Ashcrofts experimented with several types of fish to obtain exactly what they desired for their signature dish. The fish was fresh and packed with a nice flavor. I loved the “mushy peas” that are a traditional English side dish. The Pig ‘n Whistle’s angle on the English pub staple has the consistency of mashed potatoes and the great taste of English peas, butter, salt and pepper. 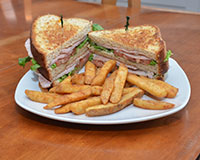 The Double-Decker British BLT is a Pig ‘n Whistle creation.

The Double-Decker British BLT is a Pig ‘n Whistle original creation that is a club-style bacon, lettuce and tomato sandwich with two layers of English-style bacon rashers, lettuce, tomato and mayonnaise, nestled within three slices of toasted whole-grain bread.

“We tell our new customers that the BLT isn’t your traditional American BLT,” Philip said. “Ours has succulent, savory English bacon.”

His description is dead-on. The huge sandwich was loaded with nice, thick cuts of English bacon that tasted fabulous. The sandwich could easily feed two people. 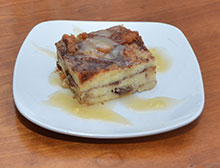 The Bread and Butter Pudding is a secret family recipe.

Sundays are popular at the Pig ‘n Whistle as a traditional Sunday meal of roasted beef, herbed potatoes, steamed vegetables, Yorkshire pudding and gravy is served.

The Bread and Butter Pudding is Philip’s mum’s family recipe. The dessert was very tasty with a nice texture and was accented by a good whisky sauce. Homemade scones are also available along with an array of other desserts.

“We have adjusted our menu six times based on customer preferences,” Philip said. “We value feedback from our customers to help us continue to grow and provide outstanding meals.”

The restaurant is decorated with many fun, British-themed items, but the main conversation piece is a 1977 red Mini automobile that is parked in front of the Pig ‘n Whistle. It is adorned with a Union Jack on the roof and is very popular for tourists to take photographs. When you visit, ask Philip to tell you the story of the car and how it got to Hardy.