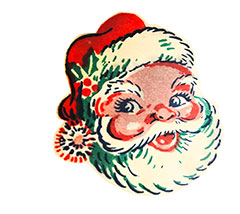 Snows all seemed deeper, crisper back then. The air, somehow chillier. Savory aromas, wafting from that Franke’s Bakery delivery truck pulled into our driveway, seemed sweeter, more poignant. And the twinkling lights in a lively downtown Little Rock seemed brighter by far than they ever have since.

They’ve written volumes about Christmas in New England. Holidays in a frozen Midwest. In balmy Texas and California. But what was it like in 1950s’ Arkansas? In that state’s growing capital city of 100,000 souls? Well, like nowhere else; that’s for sure.

Typically, Mom began holiday preparations after Thanksgiving, assembling our cards, envelopes and addresses. Using her excellent penmanship, she’d address each envelope to distant relatives in places I then thought exotic. To those up in chilly Ohio where she’d once lived. To others in Hollywood where movies were made. Or sunny Florida where our well-to-do Dean kin had retired to fancy places like Sarasota, St. Pete or Boca Raton.

Early in December, Mom and I would hike a few blocks up to our trolley line. We’d wait in a queue inside a tiny Hillcrest branch post office while middle-aged men with eye-shades puffed smoke as they efficiently weighed and stamped packages and bundled our stacks of Christmas cards. If a card then was destined for a local address, one just wrote CITY on it, no zip codes. Leave that flap unsealed and you’d save a penny off each three-cent first-class postage!

From there, we’d saunter down to Spatz’s Bakery where a friendly German couple daily baked heavenly bear claws, eclairs, Long Johns and cherry danishes — each done up in festive holiday wrap. Just open that door, hear that bell jangle and holiday aromas poured out past your nose onto the sidewalk! Next door, the huge picture window at Bush’s Barber Shop revealed men patiently getting holiday trims and shaves, perhaps from the gregarious Barnwell brothers. A bootblack, meanwhile, buffed men’s dress shoes to high luster, then proudly displayed his handiwork in the picture window for passersby to admire. A block down Kavanaugh Boulevard, friendly Carroll Stegall greeted each holiday shopper entering his variety store; its shelves stocked with notions to make anyone a fine Christmas gift. After shopping, one could sashay back up the street to Leo Whisenant’s cozy drive-in — a former Tastee-Freeze — where meaty cheeseburgers, fries and thick chocolate malts were daily fare. Just plug some change into Leo’s Rockola juke box, and you might hear Gene Autry sing about “Rudolph the Red-Nosed Reindeer.” Or hear Mel Torme croon about chestnuts roasting.

Looking for the special gift

Sometimes, suburban Hillcrest shops lacked special gifts required for close friends or family. Mom and I then hopped a South Main bus, 25 cents fare, for a half-hour’s ride into town. We’d pass a busy Christmas tree lot at Stifft’s Station, then admire bright lights atop the Arkansas School for the Blind’s Parnell Hall. Crossing the Third Street viaduct, we’d see our State Capitol, its dome festooned in blinking red and green lights! At Broadway, we’d glimpse the 555 Auto Center where young men sometimes drove a Model T Ford along its roofline crest, five stories up! That was a mere prelude to Main Street where silver aluminum tinsel was strung across streets, one sidewalk to the other. Huge silver metal stars dangled above intersections. Traffic lights flashed what seemed a seasonal red, then green. Some intersections had “Denver lights” to stop traffic in all directions at intervals, so avid shoppers legally could jaywalk, “scrambling” across crowded intersections.

Downtown offered those shoppers a dizzying array of retail — cozy Allsopp & Chapple bookstore and Moses Melody Shop for records. Main’s west side had a parade of hotly competing department stores — M. M. Cohn’s, Gus Blass, Kempner’s, Penney’s, Sears and Pfeifer Bros., each courting shoppers’ holiday dollars. Show windows abounded with fine clothes for adults and toys for us hopeful kids. Miniature American Flyer and Lionel trains whizzed about. Animated Santas with attendant elves hammered away in a polar toy shop. One store boasted upstairs a huge miniature circus layout — its midway and sideshows fully lit and animated. It was feast enough for adult eyes. But for us kids, it was a fantasy paradise!

Just up Main, toward the Manning Hotel, floated an eerie green neon proclaiming it as upstairs studio for KTHS-AM 1090. The station had moved from Hot Springs’ fine, old Arlington Hotel where call letters had stood for Kome To Hot Springs! In a few more years, that station would become “The Mighty 1090,” beloved KAAY, known far and wide to all us young rockers!

Nearby, three major downtown theatres offered first-run holiday entertainment. The old Royal on Main had become the Center Theater. The former Pulaski on West Capitol Avenue was renamed the Capitol. And the fine, old Kempner Opera House on Louisiana had Arkansas Theatre on its marquee. In their midst stood Franke’s excellent cafeteria with its hallmark eggplant casserole, and the cozy Krystal dinette that sold sacksful of 12-cent mini-cheeseburgers.

Visit downtown at just the right time, and you’d be stalked by a huge papier-mache chap sporting a top hat and monacle. “Mr. Peanut” moseyed and sashayed up and down Main, doling out silver teaspoons of hot, salted peanuts — samples for youngsters who’d then eagerly coax parents into the store to buy holiday nuts. Cashews. Pecans in volume. Mr. Peanut somehow KNEW which kids already had enjoyed his largesse. No seconds! Yet his meandering presence was all part of the intangible holiday spirit downtown.

So what could possibly add more holiday charm? Salvation Army bell-ringers? How about a Christmas Parade? Down south toward the Southern Maid Doughnut shop, one heard the blare of high school bands, their ground-shaking drum corps yet blocks away. Anticipation rose gradually until musicians, rank and file, hove into view. Some wore red and green holiday garb as they played traditional Christmas music. Between bands marched lively Spirit groups — cheerleaders, drill teams — carrying banners, shaking pompons or twirling batons. Drum majors wore fancy shakos, spats and strutted as they led musical masses marching down Main Street, its sidewalks jammed with gawking spectators. Mounted horse patrols clopped by. Shriner clowns honked horns or roared past playfully, stunting in noisy miniature cars as they passed. The last band played “Santa Claus Is Coming to Town.” And, as if by magic, a sleigh-like float appeared with a jolly Santa at its helm. 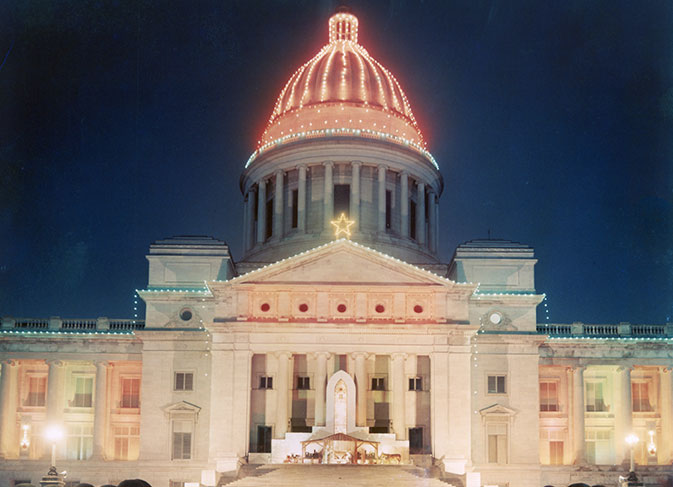 The Arkansas State Capitol in the 1950s and 60s was decorated in red and green lights. A nativity scene featuring hand carved figures is pictured at the top of the Capitol steps. Photo courtesy of Arkansas Secretary of State’s Office

Many families used to end their fest with a visit to the Capitol’s east steps and the manger scene erected there. In 1992, the state divested itself of that tradition, but the private Foundation to Protect and Promote the Nativity still erects a similar display annually. It’s moved to the south mall near West Seventh Street. There’s still a parade with Santa, and the Capitol is covered in lights, although they are now clear and not red and green. It is heartening to see the old traditions remain as new ones begin.

Jerry Dean grew up in Little Rock in the 1950s and worked at the Arkansas Gazette as a reporter and later the Arkansas Democrat-Gazette. He now resides in Tennessee.