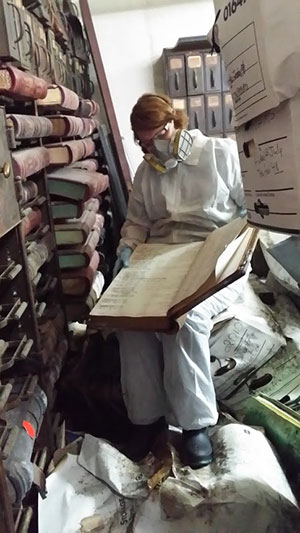 ASA’s Dr. Lisa Speer in protective gear, checking the damaged originals against lists of previously microfilmed information. All unique volumes in good enough condition for microfilming will be microfilmed for future research.

They went in and out of the courthouse over and over again, decked in full protective gear: white Tyvek suits with masks, rubber boots, nitrile gloves. Everyone watching had a theory: “Is there a gas leak?” “What are y’all, beekeepers?” “Look! It’s the Ghostbusters!”

What the curious citizens of Howard County were actually witnessing, though, were librarians: expert archivists from the Arkansas State Archives (ASA) at their most hardcore, rescuing thousands of important records from a courthouse basement filled with mold and muck.

The ASA staff, led by Executive Director Dr. Lisa Speer, was on hand in protective gear for a county-requested special intervention. Among ASA’s responsibilities is helping county leaders preserve the treasure trove of historical information in their care.

The Howard County Courthouse in Nashville had been built in 1939 directly over a natural spring. The county had installed a sump pump, but the precautions were not 100 percent effective. All that moisture had built up, heavily infesting many of the records with black mold, disintegrating others. ASA’s team quickly determined that the mold remediation would be a very “time-consuming, dirty and expensive” project, Speer said. The reinforcements needed to call for reinforcements. 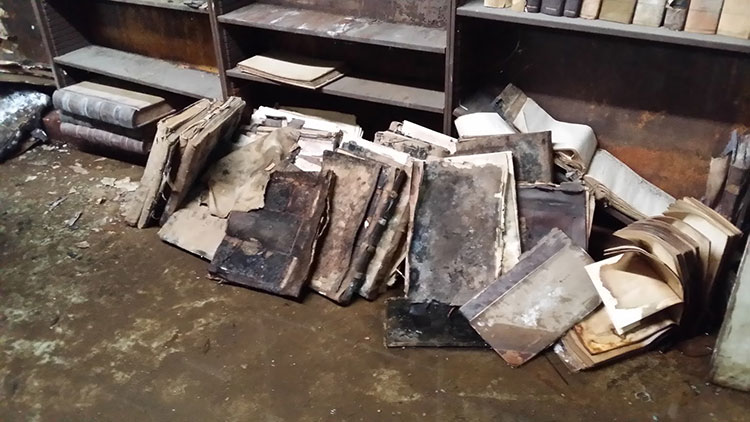 Ledgers with decades of mold damage.

Turning to ASA’s parent agency, the Arkansas Department of Heritage (ADH), Speer was able to acquire additional funding from ADH to hire a professional disaster salvage company, Metro Disaster Services in North Little Rock, and to fund their own efforts. The company used a HEPA vacuum, special mold retardant and an ozone treatment on the materials, but determined that in many cases the mold was too advanced for many of them to be salvaged. The solution was to microfilm the records, then dispose of the contaminated originals. Not all could be saved; many volumes were irrecoverable.

Today, the rescue effort continues, now from a climate-controlled storage unit. The ASA staff is working on cleaning and preparing the materials for micro-filming, then will send them to an off-site microfilming lab to prevent contaminating the ASA’s permanent collection.

Speer said there are many lessons to be learned from the adventure. First of all, whether you’re a private citizen or running a county courthouse, records you need to keep need appropriate storage, she emphasized. “And when you discover a problem, it’s much quicker and less expensive to fix it right away than waiting. It will only get bigger on its own,” she said. And, although they are tempting “extra” spaces in a building, attics and basements are the worst places for storing important documents. They are more at risk of vermin, fire, leaks and floods there, plus many other hazards unique to those traditional storage spaces, like extreme variation in temperature. Taking the time to find an appropriate long-term storage solution can save a lot of future effort and money.

But most of all, Speer said, “Don’t be afraid to ask for help when you need it. That’s what we are here to do.” Local officials, she said, often don’t get the training they need to know the rules and laws they are supposed to follow. “Please reach out to us, like Howard County did, whenever you have questions or you need help with an operation like this. We’re a resource you have; use us.”