Tim Ernst, Arkansas’ renowned wilderness photographer, captured portraits of some of Arkansas’ beautiful and, sometimes elusive, wildlife in all their splendor in his book “Arkansas Wildlife: Intimate Portraits of the Wild Species that Roam ‘The Natural State.’” We are pleased to present a portfolio of some of those photos, along with Tim’s descriptions from the book.

Purple finch in the deep freeze 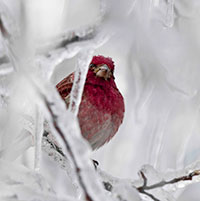 The purple finch is the bird that noted naturalist Roger Tory Peterson famously described as a “sparrow dipped in raspberry juice.” 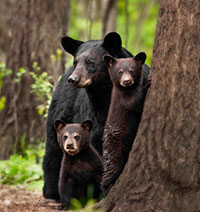 winter months inside their dens, which is when cubs are born. … Twins are common, and we’ve even seen a bear with triplets near our cabin before. Four cubs are rare. Bear dens are most often dug into a hillside in rocky areas, but bears will also den in large hollow trees.

Bobcats prowl the night, and travel miles along their habitual route in search of food — you almost never see one in daylight. Like all cats, the bobcat “directly registers,” meaning its hind paw prints usually fall exactly on top of its front paw prints.

Sometimes wonderful things happen right out of the blue, and that is serendipity. Such was the case one 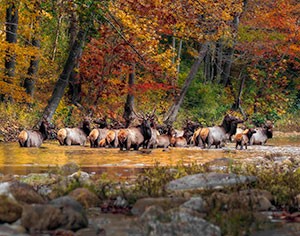 crisp fall day as I was wading up the Buffalo River in search of beautiful fall color. I was standing knee-deep in the middle of the river photographing a neat reflection when I noticed some movement out of the corner of my eye — a herd of cow elk was approaching the river. As luck would have it, I was using a wide-angle lens and my telephoto lens was in my camera bag, across the river on the bank. The elk would have been tiny specs with the wide-angle lens so I frantically waded across the river to get my big lens, but that put me out of sight of the elk. So I waded back out into the middle of the river once again and then discovered there was a bull with the cows! I quickly set up my tripod and big lens, and just then the bull turned and looked directly at me (he was probably wondering who this fool was standing in the river with expensive camera equipment). I only had time to take one photograph before the bull turned away and walked off. 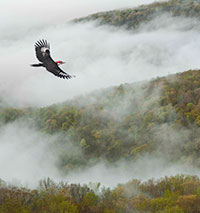 This is the largest woodpecker in the United States, and it is quite startling to see one in the deep woods since they are so big! They dig rectangular holes in trees to find ants, and these excavations can be so broad and deep that they can cause small trees to break in half. 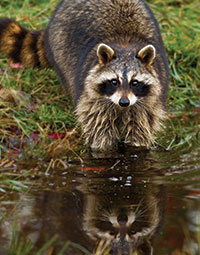 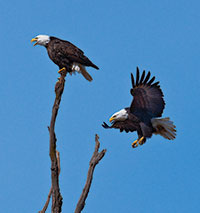 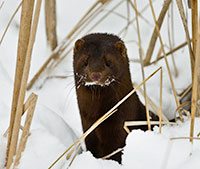 A momma bear will often use nearby trees as nurseries and send her cubs up the tree for safekeeping while he attends to other business on the ground. 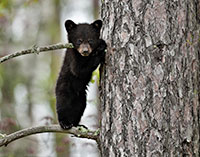 Tim Ernst, 61, lives in a log cabin called Cloudland in the middle of the Buffalo River Wilderness in Newton County with his wife, Pam. He has been a professional nature photographer for more than 40 years and has had images published in numerous publications, including National Geographic. A member of Carroll Electric Cooperative, he has written several guidebooks and recently released his 16th “coffee table” book entitled “A Rare Quality of Light: 40 Years of Wilderness Photography.”