David and Kristie Brewer always dreamed of running a successful business together, and on April 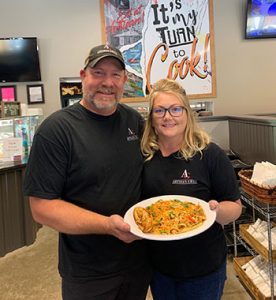 David and Kristie Brewer opened the Artisan Grill in 2014.

David was working for the Arkansas Department of Corrections, and Kristie was working as a teacher for the Izard County Consolidated School District prior to opening the doors of their restaurant. The restaurant grew and moved once before the couple completed construction of the current location in Ash Flat.

Artisan Grill’s clean, crisp exterior design extends to the welcoming interior’s bright, spacious dining areas, as well as the relaxing, covered patio. The restaurant’s name was inspired by one of Kristie’s students who left a great memory for her. I won’t spoil the story; you just ask her when you stop by to enjoy a great meal.

Ash Flat, located in Fulton and Sharp counties, is among 18 Arkansas cities that fuse two counties into its boundaries. This is fitting, as the culinary style of the Artisan Grill fuses different types of cooking styles and flavors.

“We take foods that people are familiar with and add our flair to them,” Kristie said. “We have introduced new items to our customers that they now crave and love. And we typically change our 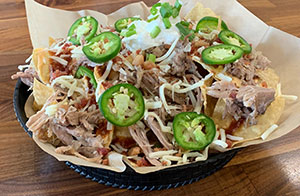 menu a few times each year.”

I started with the Redneck Nachos, a creation of David’s. The dish included layers of smoked pork, fries, melted queso, mozzarella cheese, chopped bacon, green onions and fresh jalapeños, drizzled with the Artisan Grill’s chili-lime sauce and sweet heat barbeque sauce, served atop a huge bed of warm tortilla chips. Don’t worry if you aren’t a redneck — this would please any palate.

The fish tacos featured grilled tilapia with fresh, crisp toppings in a warm flour tortilla shell. The tacos were accompanied by a memorable salsa from a family recipe handed down from a 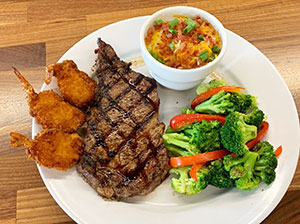 A ribeye with fried shrimp, loaded mashed potatoes and a vegetable medley is artistically plated at the Artisan Grill.

The Artisan Grill offers a grade of steak that is a step above what is typically found in restaurants, and after enjoying the grilled ribeye with large fried shrimp, I will attest to its tenderness and great flavor. The large, well-prepared steak was cooked to perfection. The loaded mashed potatoes and fresh grilled red bell peppers and broccoli made for a great plate presentation. 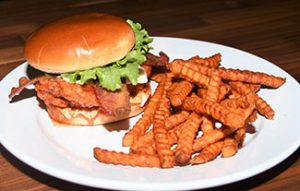 homemade ranch dressing, thick applewood smoked bacon and provolone cheese. If you like a sandwich with a kick, try this beauty.

The Dragon Noodles featured flat noodles, chicken, onions, mushrooms, sweet red peppers and carrots sautéed in a house-made Korean barbeque sauce, topped with spring onions, cilantro and peanuts. It tasted exotic yet familiar. The chicken was nice and tender, and the carrots added a refreshing texture.

I was told that the hamburgers and chicken Florentine are also crowd favorites.

The Artisan Grill is a success due to a husband-and-wife partnering to create a restaurant masterpiece. Trust David, Kristie and their team of artisans to serve you a picture-perfect meal in a beautiful setting. 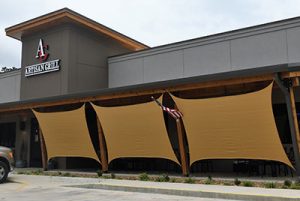 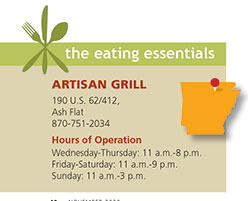