Fried chicken is a Southern staple, and I have great memories of my family enjoying many meals of 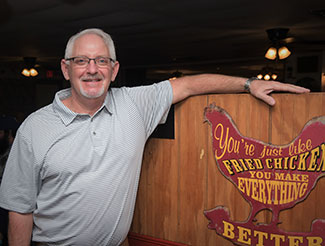 David Meyers has owned the Monte Ne Inn for more than half of its 50 years.

my grandma’s fried chicken, and all of the fixings, as we sat around several tables. When I recently visited the Monte Ne Inn in Rogers, I felt like my aunts, uncles and cousins would soon join me for dinner.

The Monte Ne Inn has served traditional chicken dinners since 1971. And, after dining there, I can certainly see why it is so beloved.

David Meyers, who purchased the establishment in 1994, said the Monte Ne Inn has brought multiple generations of families together. “I’m the caretaker of this great Arkansas institution,” he said. “Our goals are to provide a clean restaurant with consistent food at a decent price with great service.”

Once you are seated, a charming server will quickly appear with a warm crock of delicious and nourishing bean soup. The main event follows, with heaping bowls of fresh, fried chicken, homemade mashed potatoes, cream gravy, seasoned green beans, sweet corn, coleslaw and a loaf of homemade bread with butter and apple butter.

My family was in the poultry wholesale business when I was younger, and I learned about the different ways to cut up whole chickens. My all-time favorite piece to enjoy was the keel breast cut; the founders of Monte Ne Inn must have felt the same because each bowl features a fabulous keel breast. The fresh, never-frozen chicken features a crisp, flour-based crust that ensures the poultry is moist and very tender. And, yes, it is beyond finger-licking good. It is so popular that the Monte Ne Inn typically sells more than 90,000 pounds of chicken each month.

The vegetables were great co-stars for my meal. The slaw was nice and chunky with an excellent crunch. The white cream gravy and mashed potatoes were good, and I loved dipping my chicken in the gravy — a trick that I had not tried since childhood. The green beans with bacon were a step above, as was the corn.

The bread was a treat. Besides fried chicken, there is nothing as comforting as warm, homemade yeast bread. This is especially true when it is served with sweet apple butter and lots of regular butter.

The best thing about Monte Ne meals is the fact that if your family wants more, just ask, and it will be 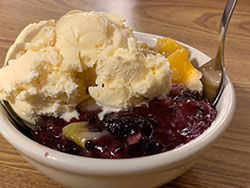 David did confess to me that he made one change in his tenure as the owner of the Monte Ne Inn. He added dessert to the menu. The restaurant offers blackberry or peach cobbler; strawberry, cherry, blueberry and chocolate cheesecake; hot fudge cake; vanilla ice cream; and sherbet. I tried a generous bowl of warm, wonderful blackberry cobbler served with two scoops of vanilla ice cream.

It was further confirmation why deserving Monte Ne Inn recently was inducted into the Arkansas Food Hall of Fame. 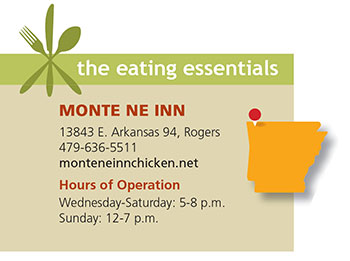