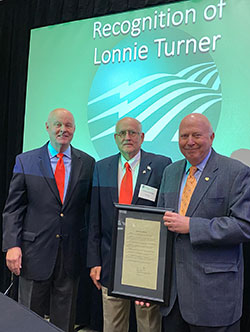 Turner, 75, retired on Nov. 22 after 44 years of service to Arkansas Valley Electric. Major issues during his career included the proposed deregulation of electricity and the move to get 100 percent power from AECC. He worked closely with Arkansas Valley Electric members on a variety of issues, including right-of-way maintenance.

“The nicest thing about the co-op is all you’re ever asked to do is to make it right,” Turner said in a recent interview.

He added that, “A co-op is a good group of people who has formed an organization to do good.”

As part of his recognition, he was presented a resolution signed by Buddy Hasten, president and CEO of AECC and AECI. The resolution reads as follows: “WHEREAS, Lonnie Turner has represented and worked with Arkansas’ electric cooperatives for more than four decades; and

“WHEREAS, he advised on numerous legislative and regulatory matters, including energy rates and electric deregulation; and

“WHEREAS, his work has had a positive impact on the quality of life in rural Arkansas and for Arkansas’ electric cooperative members; and

“THEREFORE, BE IT RESOLVED, that we consider Lonnie Turner a friend of the electric cooperative program in Arkansas; and

“BE IT FURTHER RESOLVED, that we express our sincere best wishes to Lonnie Turner for a wonderful and blessed retirement.”