As the opening dancers take their places, the anticipation and energy of the whispering audience on the other side of the curtain is almost palpable. This is the moment the dancers have been looking toward for months, the heady buzz that comes from being on stage again, about to do what they love most in the world: dance their hearts out.

This moment is an experience Ballet Arkansas dancers have had performance after performance for 40 years, since the organization incorporated in 1978. But in its fourth decade, Ballet Arkansas is having a moment — and an unprecedented year. Preparations are underway for the state’s biggest annual ballet, The Nutcracker, at Robinson Center Performance Hall in Little Rock Dec. 7-9. Although The Nutcracker is but one part of the ballet’s 2018-19 season, it’s by far the most elaborate.

Something spectacular is afoot 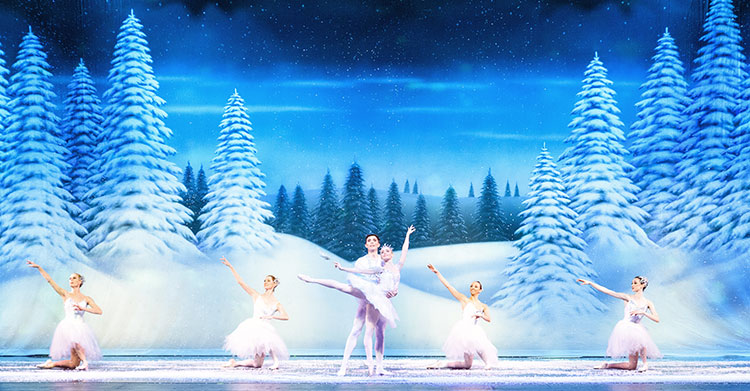 The “Snow Scene” from Ballet Arkansas‘ 2017 production of The Nutcracker. photo by J Smithwick

The production takes a full week to set up for the weekend performances, with crews assembling the sets and rigging the lights and backdrops. After months of daily rehearsals with Executive and Artistic Director Michael Fothergill and Associate Artistic Director Catherine Fothergill (the Fothergills are married), the Ballet Arkansas company — 10 women and four men, all full-time, professional dancers — rehearse on the stage for about a week, with at least two dress rehearsals in full costumes. 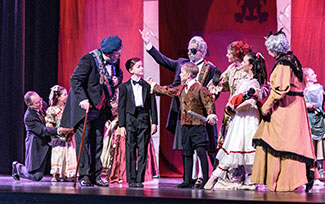 More than 200 community cast members come from sometimes many miles away to be part of The Nutcracker. photo by Melissa Dooley

The cast is filled out by more than 200 children and adults, the “community cast,” from outside the company. Besides the company dancers, Ballet Arkansas has only three full-time staff members, so the production depends on dozens of volunteers. The Arkansas Symphony Orchestra accompanies the dancers with the music of Tchaikovsky, and two school choirs perform. There’s a lot to coordinate.

To celebrate the organization’s anniversary, this year’s Nutcracker will be even more of an event. Look for some special effects and surprises, plus the return of some favorite costumes not used in several seasons. In 2017, Michael updated the choreography in Act II for the first time in many years; this year, he has added new choreography for Act I as well. “We wanted to do some really beautiful, fun things for the occasion,” Catherine said. “We’re calling it the ‘40th Anniversary Nutcracker Spectacular.’ It’s still the familiar Nutcracker you know and love, but truly like you have not seen it before.” 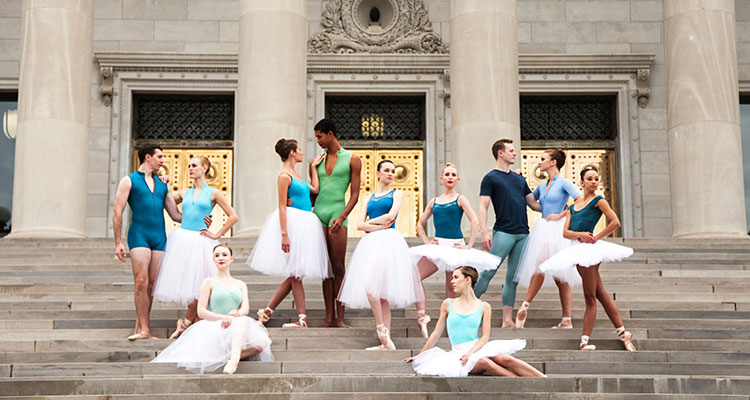 Some of Ballet Arkansas’ company on the steps of the Arkansas Capitol. photo by Melissa Dooley

Arkansans have been enjoying Ballet Arkansas’ astounding dancers since 1978. In 2009, the nonprofit decided it was ready for the big time: it officially became a professional company (traditionally in ballet, “company” indicates paid, adult dancers). Since then, the company has grown from six to 14 dancers. Paul Tillman, a dancer now in his ninth season with the company, said that since going fully professional, Ballet Arkansas has seen unprecedented growth with an increasing quality of talent. “The ballet has always been good, something to be proud of, but it’s gotten progressively better, especially since the Fothergills came in 2017,” Tillman said. “With Catherine and Michael working with us daily, regularly bringing in international-caliber talent to work with us, everyone is energized and working hard to give them our absolute best.”

As Ballet Arkansas’ reputation has grown, so has its competitiveness. Earlier this year, when the ballet added two open positions, more than 300 dancers from across the country auditioned to join the company. Of the current company, two members are Arkansas natives: Kaley Kirkman from Fayetteville and Meredith Short Loy from Little Rock. The others come from across the U.S., but now claim Arkansas as their home.

Tillman, a McKinney, Texas, native, said joining Ballet Arkansas was a great decision. One reason is personal: four years ago, a new dancer, Megan Hustel, joined the company. Last Christmas, they got engaged, becoming one of two sets of fiancés in Ballet Arkansas.

A precision sport, and an art 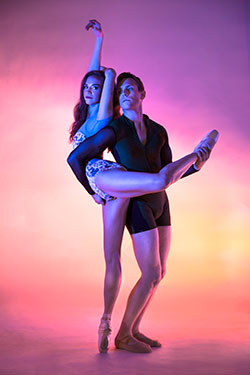 Like ice skating, ballet is at once an art form and a high-impact sport. Dancers’ expert technical prowess must be fine-tuned to the most minute detail of how a pinky finger is curved or how relaxed a shoulder is during a jump, then married to ceaseless artistry and seamlessly choreographed to evoke emotion through movement and music. Lynsie Ogden, a member of Ballet Arkansas since 2015 who is cast in The Nutcracker as the Snow Queen opposite Tillman’s Snow King, said she grew up studying all kinds of dance, but ballet was the most challenging. “For ballet, everything has to be perfect, precise,” Ogden explained. “It takes a lot of being aware of every little thing your body is doing, every moment. It’s mentally exhausting, too.”

At 29, Ogden has been dancing for a quarter century, much of it very hard on her body. Sprains, strains, muscle tears, dislocations and broken bones are part of the life. Dancers often put off surgery, opting to work through the pain, and an injury can bench them for a season. Like other athletes, they train daily. Ogden said, “Dance has taught me more about life and about respect and holding myself accountable and dedication than anything else, the kind of lessons that people who aren’t part of a team sport don’t always get. You learn much more than how to dance.” 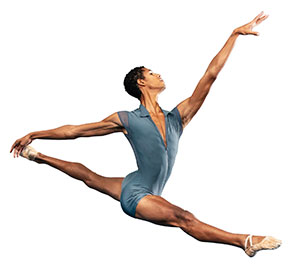 Frank Lawrence is chief executive officer of The Athletic Clubs of Little Rock, which sponsors Ballet Arkansas as its official athletic training facility.

“I know first-hand what it takes. My brother-in-law, Joey Stocks, used to be a dancer for Ballet Arkansas,” Lawrence said. “It’s probably been 20-plus years, maybe longer, but he has always been the most amazing athlete. The amount of strength and coordination, agility and endurance that it takes to be a dancer is seriously impressive. Arguably, they are some of the world’s best athletes. We jumped at the opportunity to support them.” 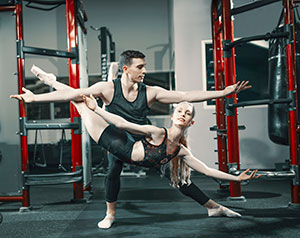 In Ballet Arkansas’ Main Street studio space, the dancers rehearse six hours a day. The dancers cross-train on their own time, and many supplement their income teaching private lessons or holding down second jobs. Tillman acknowledged it can be awkward for the dancers when they first talk with people who don’t understand the dance world or what it means to be a ballet dancer. “Lots of times when I tell someone I’m a professional dancer, they’ll say, ‘Dude, when are you going to get a real job?’ I have to explain I make a living doing this. It’s who I am.”

Ogden said, “Ballet Arkansas is unique from everywhere else I have been professionally because there’s such camaraderie and everyone is encouraging everybody. There’s absolutely no animosity.”

Catherine said Ballet Arkansas has always done a lot of outreach to the state and remains focused on continuing that tradition. The ballet is working with Arkansas Children’s Hospital and other partners to bring Ballet Arkansas’ livestream channel to people, no matter where they are. Another way to bring ballet to the people is “lecture demonstrations” in the schools.

“We love bringing dancers into a community where kids can visit with them and ask questions about what it’s like and how much work it actually takes to do this professionally,” she said. Sponsored touring productions are another option. Ballet Arkansas also provides educational workshops to dancers across the state, exposing them to expertise and choreographers not found in their hometowns.

As big and beloved as it is, The Nutcracker is just one part of Ballet Arkansas’ rich and varied programming this 40th season. The dancers will perform excerpts of classical ballets like Swan Lake and Romeo and Juliet, children’s programming including Mary Poppins (timed to coincide with the Mary Poppins Returns movie) and The Ugly Duckling and contemporary dance from world-renowned choreographer Ma Cong; onstage accompaniment by one of the most accomplished pianists in the world, Dr. Drew Mays; events such as a Winter Wine Taste and the Art Movement in the spring. There’s even a James Taylor tribute, “Fire and Rain.”

“We literally programmed something for everybody in our 40th season, no matter what you like,” Catherine said. “Traditions matter. We’re trying to introduce audiences to something new while also performing world-renowned pieces that we want to pass on to dancers and audiences alike. Dance is just another way of telling a story.”

This season has already pushed Ballet Arkansas’ boundaries. “Because we are a smaller company, we typically do portions of ballets rather than a full-length production,” explained Catherine. “But since our company has grown in size and maturity, it’s now feasible for us to tell those longer, complete stories.”

They started with one of their own. In October, the ballet held the world premiere of Dracula, an original, full-length contemporary ballet choreographed by Michael, with multimedia backdrops.

“As dancers, we always want to push the boundaries of what we can do, both physically and creatively, and find ways to welcome new audiences to the world of ballet. It’s exciting and stimulating for all of us,” Catherine said with a smile. “And it keeps us on our toes.”