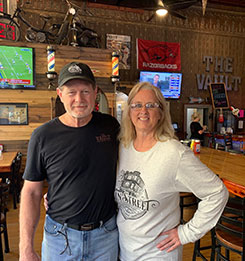 Lonnie and Mindy London own The Vault 1905 Sports Grill in Van Buren.

Lonnie and Mindy London visited the Van Buren area often to ride motorcycles and enjoy the area’s scenic beauty. They eventually retired to the area and opened The Vault 1905 Sports Grill on Main Street in 2019.

Lonnie, a retired fire chief, and Mindy, a retired school teacher, wanted to open a restaurant in downtown Van Buren offering meals and amenities that would complement existing businesses in the bustling historic district.

Lonnie and Mindy selected the former Citizens Bank & Trust building at 624 N. Main St. as the location for The Vault 1905 Sports Grill. During the building renovation, a drop ceiling was 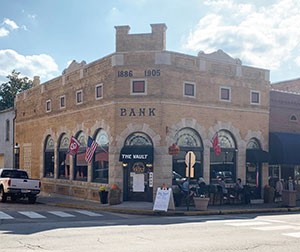 The Vault 1905 Sports Grill is located in the former Citizens Bank & Trust building in Van Buren.

removed so the beautiful 18-foot-tall tin ceilings could be enjoyed, and plaster was removed from the walls to uncover antique tin walls. The tin work was sandblasted and lovingly restored in great detail to its original state. If you look closely on the wall tins, you will be able to read the words E pluribus unum, a nod to the building’s banking heritage. The original stained glass is featured, as well as bowling alley lanes that have been repurposed for the flooring and the
back bar.

During my visit, I enjoyed the Fried Squash: slices of Southern-fried heaven, breaded in a Vault secret-recipe coating and served with house-prepared ranch dressing. Fried to a golden brown, the disks have a kick to them.

Michelle Perry, owner of Perry’s Attic Treasures just down the street, told me that she loves the many menu offerings, including the Jalapeño Pimento Cheese Dip, the Chicken Spinach Flatbread and the Fried 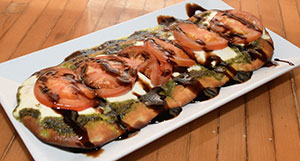 I heard that The Vault has great pizzas. Lonnie pulled another treasure out of his menu, serving my party the Caprese Flatbread. It featured basil pesto, Roma tomatoes, mozzarella cheese, balsamic vinegar, shaved Parmesan cheese and basil on a nice-sized piece of warm flatbread. My lunch guests included employees from Arkansas Valley Electric Cooperative, who agreed the flatbread creation was excellent.

I had a local whisper to me that the Vault Sausage, supplied by Key’s Family Butcher Shop, is spectacular. The jalapeño-cheddar sausage of grass-fed beef is grilled with seasonal vegetables and served with buttered toast. He grinned as he was eating his, so I’m pretty sure that it was fabulous.

I bet Lonnie keeps the recipe for The Prime Rib Burger in the bank vault, as it was yumm-o! The Vault chefs use shaved prime rib, a half-pound of never-frozen ground chuck, pepper jack cheese, onion rings and The Vault’s wing sauce to create this jewel. Based on the lively sauce, I’m planning on trying some wings on my next visit.

Desserts at The Vault are prepared by a local bakery, Sweet Boutique. I can attest that the Triple Chocolate 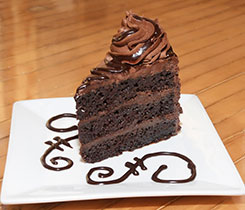 Van Buren’s Main Street is six blocks of beautifully restored buildings from the late 1800s and early 1900s that are listed on the National Register of Historic Places. Plan a day to visit, and definitely plan on dining at The Vault. 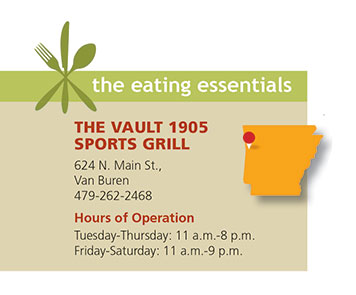