Crape myrtles are ubiquitous to the South. They are one of the most common summer-blooming plants we grow, blooming all summer long without a care in the world. But times are changing. What was once considered a plant-and-forget-it plant now has a new insect wreaking havoc. Crape myrtle bark scale is showing up all across the southern half of Arkansas and now may be moving northward.

The crape myrtle bark scale was first noticed in a Dallas suburb in 2004 and started its northern migration, spreading quickly across the South. In October 2013, the insect was confirmed in Germantown, Tenn., and, finally, in Little Rock in January 2014. This year it seems a day hasn’t gone by without a new report.

Many gardeners may first notice a black, sooty mold on the stems or trunks of their plants. This black 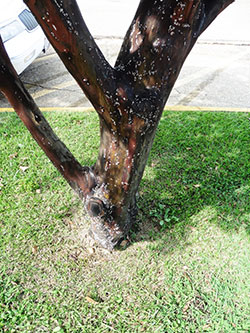 substance is called sooty mold and is a byproduct of scale and aphids. As these insects feed, they give off a sweet substance called honeydew. Wherever this honeydew lands, the mold will form. If the mold is accompanied with white specks on the trunks or branches, that is the crape myrtle bark scale and is cause for concern. 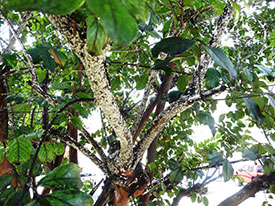 If spotted early, female bark scale appear as white or gray felt-like growths on small twigs to large trunks, often appearing near pruning wounds or in branch crotches on older wood. If left undetected, the spread can become fairly extensive and heavy infestation will result in white-crusted clusters of insects, which may blanket small stems and be quite visible on the trunks.

There may be dozens of pink eggs or crawlers under some of the larger white scale covers. The covering of the adult scale is composed of white threads produced by the female. These threads become felted or matted into a thick whitish scale covering the entire body. Eventually, she lays eggs and then dies. In a normal season, this should occur in late April to mid-May. When the eggs hatch, the small nymphs (crawlers) have legs and are mobile.

The females find their new location on the tree, become attached and start the process all over. Males develop wings and find a female, mate and then die.  Both adults and crawlers were spotted in our milder-than-normal winter last year.

Scale insects will not kill a tree in the first few years, but they can weaken it and impact blooming, resulting in fewer or smaller blooms. Long-term effects are not yet known. Check your crape myrtles periodically and look for the signs. If you have small limbs that are heavily infested, prune them off and dispose of them. Don’t put them in a compost pile, or put them out on the curb for yard-waste pick-up.

In a perfect world, burning the debris would be the best way to eradicate the pest, but there are burn limitations in some cities. Debris left exposed in an open truck or put on the curb for yard waste pickup leads to a possibility that the millions of tiny crawlers could be easily spread to neighboring crape myrtles, thus accelerating the spread of this invasive insect. Instead, double bag the cuttings and put them in your regular trash pickup.

If you have scale insects on the main trunk of the tree, use a soft brush with soapy water and clean the trunk. This will get crawlers off, and also remove the black sooty mold. Once all the leaves have fallen off the tree later this fall or early winter, spray the entire tree thoroughly with a dormant oil, saturating the trunk and stems. As crape myrtles age, they have peeling bark.  This peeling bark is attractive, but also can harbor overwintering insects, which may not be smothered out with the oil, so pay particular attention to these areas when spraying.

In the spring, as the tree begins to fully leaf out, use a soil drench with a systemic insecticide such as Imidacloprid (Merit or Bayer Advanced Tree and Shrub Insect Control), thiomethoxam (Meridian) and dinotefuran (Greenlight Tree and Shrub Insect Control with Safari). These products will be taken up by the tree and moved throughout the system of the tree, and have shown good results in controlling the scale. Be aware, once the insects die, they will still be on the plant, but no longer causing damage and not spreading. Currently we don’t believe that a properly applied soil insecticide (following label directions) will have any significant impacts on foraging bees. We are continuing to monitor for any changes. Only treat a tree that has the insect problem — don’t treat all crape myrtles preventatively. Researchers are continuing to look for less susceptible varieties of crape myrtle and safer, less expensive treatments for this scale insect.

Crape myrtles will continue to be a recommended plant for the South, and hopefully in time, we can eradicate this new crape myrtle bark scale, or find resistant varieties. Until that time, monitor the crape myrtles in your yard and treat if you find bark scale. Also report your discovery to your county extension office to help track the spread. If you need more information, contact your local county extension office.