In 2013, Perry County native Robert Allen and the Calfneck Capital Corp. brought the smell of great food back to the Courthouse Square in Perryville. Their restaurant, Mustang Sally’s, opened in a site that has a rich heritage of pleasing local diners. Today, the restaurant is pleasing patrons from across Arkansas.

The restaurant’s location was originally Rankin’s Café, which was opened in 1924. A fire destroyed the original building, but another was rebuilt, and the establishment operated under a few names and owners. After years of little use, the Calfneck Capital Corp. bought the building in 2012 to assist in an effort to revitalize downtown Perryville, and a year later opened a local, full-service restaurant.

“We wanted a place to eat in Perryville,” said Buddy Metcalf, a partner in the establishment. “We remodeled and updated the building, then decided to call it Mustang Sally’s.” The Perryville High School mascot is the Mustangs, so the name gives a nod to the team.

“I love to see friends and greet new visitors each day,” Metcalf said. “Over the years, we have listened to our customers to see what they like to eat.” 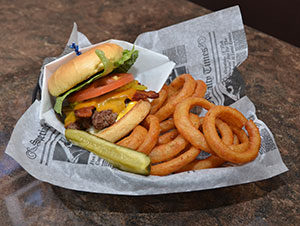 Mustang Sally’s is known for its hamburgers, so Buddy ordered a Sally Burger for me to try. The restaurant’s hamburgers are a third of a pound, hand-patted burgers served on fresh, toasted buns. My Sally Burger was outfitted with melted cheddar cheese, lettuce, tomato, pickle, sweet onion and bacon. It was delicious, and a “two-hander” as it took both hands to hold the creation. The onion rings and dill pickle slice were also good. There are many other hamburger variations for your consideration and enjoyment.

Next, I sampled a barbecue pulled pork sandwich. The restaurant’s team smokes meats on site with a combination of cherry and hickory woods. Based on the smooth, smoky flavor of the pork, they are professionals. The sandwich is served with coleslaw that has a nice peppery kick, chips and a dill pickle spear. I did make a note to try a smoked bologna sandwich in the future. 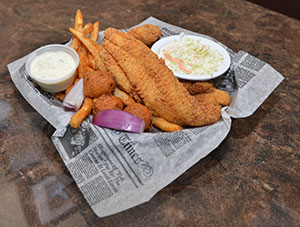 The Catfish Basket is a golden favorite. By Rob Roedel

The daily special on the day of the Let’s Eat visit was catfish. The two-piece basket featured two large catfish filets, hushpuppies, french fries, coleslaw, tartar sauce and a few onion slices. The catfish was cooked to perfection with a golden crispy crust and a hot, tender fish. 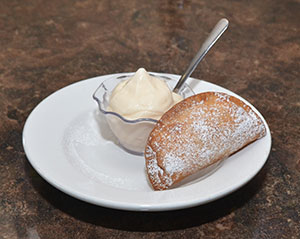 Mustang Sally’s dessert menu features many ice cream offerings. I noticed fried pies on the menu so I decided to try an apple version with ice cream. The soft-serve ice cream absolutely complimented the warm, rich, apple pie. It was a bowl clinger as I ate it all and my spoon was scraping the bottom of the bowl. Other pies offered include chocolate, chocolate peanut butter, coconut, pecan, cherry, apple and peach. 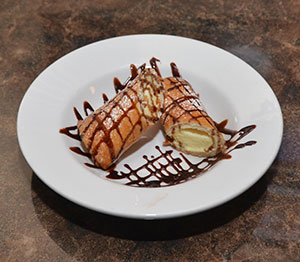 The Fried Cheesecake is an appealing dessert option.

If you want to try a slightly different dessert go with the Fried Cheesecake. This fun option has a crunchy crust and the sweet richness of cheesecake inside. The specialty is sprinkled with powdered sugar and then drizzled with chocolate syrup. The result is a great dessert that could easily cure the appetite of two “sweet toothers.”

Mustang Sally’s is a favorite dining destination for groups and motorcyclists who enjoy the beautiful hillsides in rural Perry County. Patio dining is also popular when the weather is agreeable.

“Our restaurant has a hometown feel and great service that adds to the great meals that our customers enjoy,” Metcalf said.

Stop by Mustang Sally’s on the charming town square in Perryville for a relaxing dining experience.