The greatest ideas often take flight when sparked by timing and a little luck.

If Alexander Graham Bell hadn’t spilled acid in his lab and summoned his assistant, he might not have been the first to transmit his voice over the telephone. If George de Mestral hadn’t examined burrs he was taking out of his dog’s fur, he may not have mimicked them to invent Velcro. And if Harry Coover hadn’t failed miserably in creating precision gunsights and airplane canopies, the world could’ve missed out on Super Glue.

So it was with the Arkansas Big Buck Classic, a hunting-themed extravaganza that’s part deer competition, part 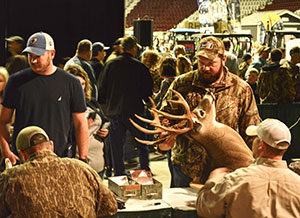 outdoor classroom and many parts that defy adequate description. The oversized event that attracts tens of thousands of people and has raised hundreds of thousands of dollars for charity is a much-anticipated fixture on Arkansas’ hunting calendar.

But were it not for want of some notebook paper, it might not exist today.

Back in the 1980s, Catherine Murchison was visiting then-boyfriend-now-husband Tommy Murchison at his farm near Coy. Looking to get her marketing homework done, Catherine realized she’d left her notebook back at Henderson State University.

“If you’ve ever been to Coy, there’s not much there to do, especially if your boyfriend’s picking cotton,” Catherine says. “So while he’s working, I asked him if he had any paper. He goes, ‘Yeah, I’ve got an old notebook in the closet. Go look.’

“I got this notebook, and I’m flipping through to get to a blank page, and I’m seeing these notes about a hunting contest, with a prize pot and where you’d have enough people that it would generate a lot of money. This was before things like this were going on. This was the late ’80s and there weren’t shows everywhere.”

When Tommy came in from the field that night, Catherine was waiting for him with questions about what she’d found.

With that, the idea for the Arkansas Big Buck Classic sprang into reality, a reality that will celebrate its 30th iteration this month. The competition welcomes hundreds of deer entries from across Arkansas in the form of taxidermized mounts and preserved antlers from the current hunting season. The entries are scored via a formula that measures the antlers and determines winners across a number of categories.

The 100-foot competition wall is a show-stopping centerpiece of each year’s Big Buck Classic. Winners through the years have hailed from all quadrants of the state. photo Arkansas Big Buck Classic

Tommy and Catherine grew up in rural Arkansas where hunting and fishing are more than just a diversion — they are among the sturdiest threads in the fabric of life. But from an experience and funding perspective, the undertaking was just this side of crazy. Neither had the slightest idea how to put on an event like Tommy had proposed, but they dove in with raw tenacity and a natural talent for understanding their audience.

“We were really serious about it. We didn’t take anything for granted, and we didn’t go into it willy-nilly,” Tommy says. “Number one, I think, it was a good idea and the timing was right. Number two, we never got complacent with what we were doing. We set it up to be a big deal, and it became a big deal.” 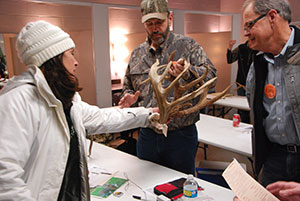 Experienced judges determine the winner by measuring the antlers of the entries. Some judges have served the show for decades. photo Arkansas Big Buck Classic

Today, the event covers much more than just the deer competition, large as it is. Additional activities provide educational and entertaining diversions for every member of the family. This year, nearly 40,000 attendees are expected to take in various hunting and outdoors-related attractions, including trained hunting dogs, rattlesnake wranglers, a chili cook-off, live deer, archery, knifesmithing, chainsaw carving and more. Hundreds of outdoor product vendors will be on hand, making it one of the largest expos of its kind anywhere.

Big Buck may have grown bigger, but the deer competition is still the draw. 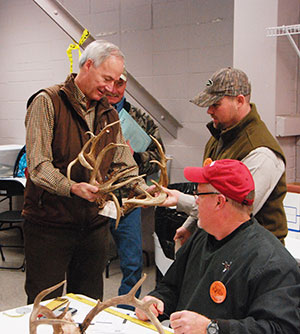 “We built a show around certain fundamentals, and even as we pulled all this other stuff around it, the structure still funnels down to that stage and that competition,” Tommy says. “We never took the attractions part to a level that took away from the staple of the show, which is the deer.”

Catherine says, “Every single year that 100-foot wall that has the 400 deer that get brought in is a brand-new harvest. So, if you weren’t one of the lucky ones, you get to see the ones that were. But if you have your deer up there, it matters. I see people standing around and people talking about those deer. And if one of them is yours, you get to say, ‘That one’s mine.’”

Every year, more than 400 entries from across Arkansas vie for the title of champion in various categories during the Arkansas Big Buck Classic.