It is fig season in Arkansas, and if your tree didn’t get hit by the early November freeze, you should have an abundance of fruit right now.

Fig trees have been gaining in popularity in recent years. The common fig (Ficus carica) can be grown 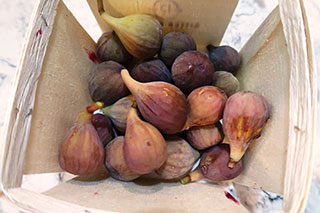 Fig trees can produce two crops of fruit per year in mild climates, but rarely does that happen in Arkansas.

throughout Arkansas, but hardiness varies within cultivars and depends on winter conditions.

Figs are a member of the mulberry family (Moracae) and are related to many familiar houseplants, including weeping fig, rubber tree and the fiddleleaf fig. The fig is one of the oldest fruit crops known to man, with its leaves mentioned in the story of Adam and Eve. The trees have long been a staple in south Arkansas but have been moving their way northward with some hardier introductions.

There are four distinct horticultural types of figs, but in our climate, only the common fig — Ficus carica — can be grown. Within that genus/species, there are 700 named cultivars, but fewer than 50 are offered in the nursery trade across the country, with three or four commonly available in Arkansas. Several new introductions are coming from breeding programs in the South.

The two most common varieties found in Arkansas are Brown Turkey and Celeste. Brown Turkey, which can also be called Texas Everbearing, is one of the oldest varieties, but it is not as tough as Celeste or Hardy Chicago, which has been grown as far north as Ohio.

Fig trees can produce two crops of fruit per year in mild climates, but rarely does that happen in Arkansas. In 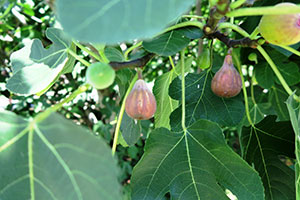 Tasty figs are a member of the mulberry family.

early spring, you may notice tiny figs very early in the season, sometimes even before they go dormant in late fall. These figs, born on the old branches, are called breba figs. It is not common for breba figs to ripen fully. Some gardeners remove any small early figs because the tree won’t start producing the main crop until the first crop matures or drops off. Our main production is on new growth and harvested in late summer to early fall. Therefore, even if the tree gets frozen back to the ground, there is the potential to get some fruit on new growth.

Common figs do not require cross-pollination, so you can grow one tree and still have fruit. Fig trees produce fruit parthenocarpically, which means without pollination. Botanically speaking, the fig isn’t a fruit, but a syconium (a fleshy stem with a hollow receptacle that envelops many tiny flowers). Regardless of what they are called, figs make for good eating!

Winter hardiness can be an issue statewide. A fully dormant tree can tolerate more cold weather than one going into dormancy or coming out of dormancy. This past year, the early hard freeze caught many plants before they had gone dormant, which led to winter damage. To add insult to injury, late freezes caught new growth coming out. If you live in a colder climate, try planting your figs in a more protected site, where they get morning sun and afternoon shade.

From trees to treats

Figs will produce best when planted in a well-drained soil in full sun. They have a fibrous, shallow root system, 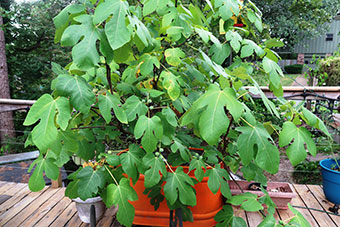 While they can reach great heights when planted in the ground, fig trees also can be grown in containers.

which makes them sensitive to drought stress. If your fig tree gets too dry, it can drop fruit. Fruit drop can also be caused by storms, cool weather soon after fruit set and weak trees. Birds, squirrels and other animals like figs as much as we do, so bird netting or protective devices can help.

Fig trees can reach a height of 25 or 30 feet tall and grow equally wide. If space is limited, they can be pruned to maintain a more reasonable size. Pruning should not be done until all chances of frost are over for the year to give the tree as much winter protection as possible.

If your figs consistently suffer winter damage, consider growing them in a large container and either moving the pot to a protected location or covering the plant in the winter.

Try some of the newer varieties. Figs are easy to grow if you can get them to survive the winter. The fruit is perishable, so eat it quickly or make preserves.