“Louis Jordan was the cat I tried most to be like.”— Bo Diddley 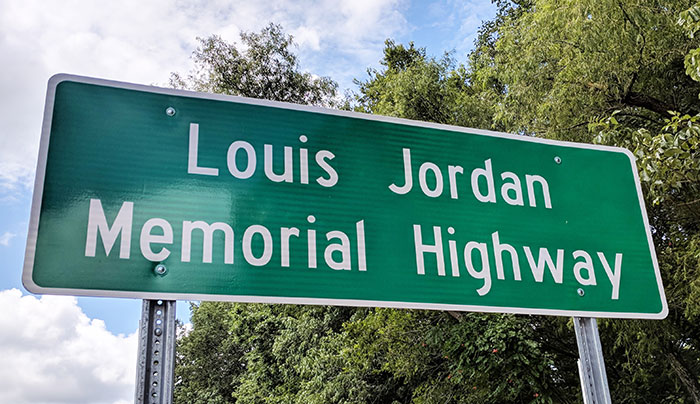 The recently renamed stretch of U.S. 49 is a point of pride for Arkansans. photo Stephen Koch

Travelers along a stretch of U.S. 49 in Monroe County are now driving on the Louis Jordan Memorial Highway. Although the recognition is well-deserved, those born during and after the rock ’n’ roll era could be forgiven for asking “Who?” 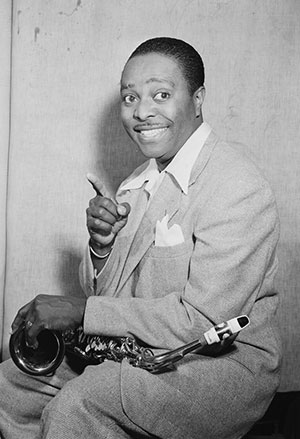 Saxophonist, singer, bandleader, songwriter — and native of nearby Brinkley — Louis Jordan (1908-1975) had more than 50 “Top 10” hits during the 1940s. And he did it all with his small, pre-R&B/rock-style combo, the Tympany Five, through the midst of the big-band era.

Creating music in a style that served as a bridge between American minstrel shows and hip-hop, Louis Jordan was the son of a musician, Dardanelle-born James Jordan. Young Louis got his start playing in bands with his father and was soon in the traveling minstrel show circuit himself. Jordan studied at Arkansas Baptist College in Little Rock, and later worked as a musician in bustling Hot Springs, as well as in El Dorado, where musicians’ wages skyrocketed during the oil boom.

Jordan became a favorite of GIs during World War II — he was nicknamed “the King of the Jukeboxes” for the broad appeal of his songs abroad and back home. He appeared in his own films, on TV, radio and in commercials, endorsed products such as U-Haul, and sold out concerts across the country. He recorded duets with contemporaries Louis Armstrong, Bing Crosby and Ella Fitzgerald, and helped introduce calypso music to North America.

Jordan is one of the best-selling American artists of the 20th century. Several of his No. 1 songs, such as “Buzz Me,” “Saturday Night Fish Fry” and “Caldonia,” stayed at the top of the charts for weeks. (“Choo Choo Ch’Boogie” — stayed an incredible 18 weeks at No.1, according to Billboard.) Some Jordan songs even permeated the public to the extent they’ve become lingering catchphrases: “Ain’t nobody here but us chickens,” “Open the door, Richard,” “Let the good times roll.”

But possibly more important than Jordan’s chart success during his time is his deep influence on those we consider influencers today: Ray Charles, James Brown, B.B. King, Chuck Berry, Little Richard and so many more, making Jordan among the most important individuals in shaping the sound of postwar American popular music. B.B. King said, “Every musician I knew — singer or saxist, guitarist or drummer — idolized Louis Jordan.” “Louis Jordan was the cat I tried most to be like,” said Bo Diddley. Perhaps most effusive was James Brown, who said of Jordan: “He was everything!”

As a boy in the mid-1940s, young Brown saw Jordan on film — yes, Jordan was also a pioneer of early music videos and musical films — and was blown away. “His talent was so awesome,” Brown said, “I thought it had to be supernatural.” Noted music writer Leonard Feather said Jordan’s impact in the 1940s was comparable to that of The Beatles in the 1960s.

So, it’s no surprise Jordan is considered a major forefather of rock ’n’ roll and R&B — and, with his wordplay and rapid-fire rhymes, even rap music — thus fully deserving of a highway sign. But what is surprising to those who learn of his accomplishments is the degree to which Jordan’s name has been forgotten by the public.

“It’s wonderful from a sense of cultural heritage,” Jacques said. “It’s a not-terribly expensive way of reminding our citizens of the great joy Arkansans have brought to the world — remarkable artists who have touched people, sometimes in their darkest hours. A voice on the radio … assuring them that life matters, that they matter.”

Jacques added: “It’s important that we champion our artists, our voices of truth — they have great value. And that recognition may be just the encouragement new generations of voices need.”

The memorial highway was officially dedicated in July 2018 by the Arkansas Department of Transportation in a ribbon-cutting event, although the signs had actually been up for months. The ceremony was held at the sign located just past U.S. 49’s intersection with Arkansas 238 — the sign nearest Jordan’s hometown. It was all in accordance with House Bill 2179, passed in 2017 by the Arkansas Legislature. Also part of the legislation were highway signs honoring fellow Arkansas musical greats Sister Rosetta Tharpe, Johnny Cash and Levon Helm.

State Rep. Chris Richey of Helena-West Helena sponsored the legislation. At the dedication, Richey noted that July 8, 2018, the previous day, marked what would have been Jordan’s 110th birthday.

“It’s a well-deserved recognition of an Arkansan who made a major impact on the development of American music,” Richey said of Jordan.

“Tourists are attracted to the rich musical heritage of Arkansas,” he said. “Anything we can do to highlight and promote the exploration of that heritage benefits the state.”

While in Brinkley, tourists can learn more about Jordan and the area’s history with a visit to Brinkley’s 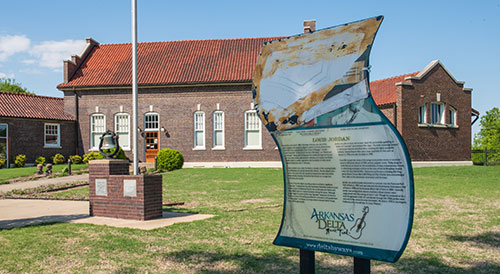 Central Delta Depot Museum. Originally a joint train depot connected to the Cotton Belt and Rock Island Line railroads, Brinkley’s Union Station opened in 1912, replacing a train station destroyed in the town’s devastating 1909 tornado. A young Jordan carried passengers’ bags from the station for tips. Passenger service ended for the Cotton Belt in 1959 and for the Rock Island Line in 1967. The station closed altogether with the bankruptcy of the latter in 1980. But poor maintenance had already set in, so by the late 1990s, this onetime example of the importance of Brinkley as a train town was in serious disrepair and had become a local eyesore.

“It was in really bad shape, with the roof caving in, and slated to be torn down,” said Michael E. Hibblen, author of Rock Island Line Railroad in Arkansas. Locals intervened, writing letters to rail officials and to then-President Clinton ­— and it worked. The building was deeded to the city, which gave a long-term lease to the Central Delta Historical Society, which operates the museum.

“Thankfully, people saw the importance of the station and preserved it,” Hibblen said. “It’s a beautiful building, and we’re really fortunate to have it still around today.” The museum — which relies on admission fees and donations — covers Monroe and surrounding Delta counties. 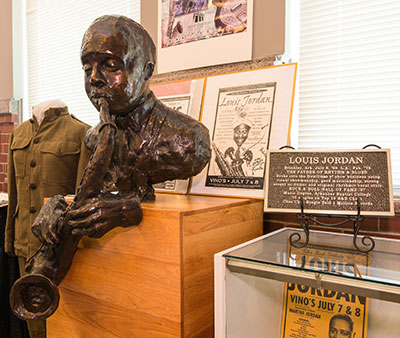 A bust of the legendary Louis Jordan is part of the museum’s collection. phot Arkansas Department of Parks and Tourism

The Central Delta Depot Museum has exhibits on Jordan and the railroads that operated the train station. The museum also serves as the visitors center for the Louisiana Purchase State Park, located some 20 miles away. Bill Sayger of Biscoe has been director of the museum since it opened in May 2003.

Between the highway signs and the museum, an Arkansas legend lives on.

Stephen Koch is author of Louis Jordan: Son of Arkansas, Father of R&B, and hosts “Arkansongs,” a radio segment about Arkansas music syndicated on stations across the state.