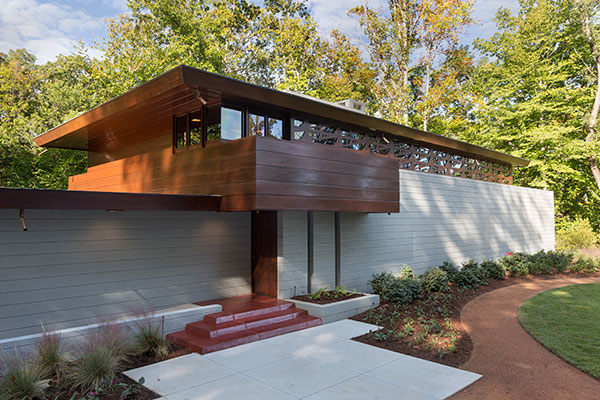 Concrete, wood and glass are the primary materials in the Bachman-Wilson House.

As an American, you’ve probably heard of Frank Lloyd Wright, our country’s most famous and influential architect. As an Arkansan, you’ve doubtless heard of Bentonville’s Crystal Bridges Museum of American Art, the internationally acclaimed museum founded by the country’s wealthiest woman, Alice Walton.

You might even have heard that Crystal Bridges acquired, transported and rebuilt an entire Frank Lloyd Wright house on its grounds. But until you’ve gone on the tour yourself, you can’t appreciate just what an astounding addition the Bachman-Wilson house is to our state.

I thought I fully appreciated it already, before my visit there for this story. I like architecture and know a little about it. I can usually recognize Wright’s influence in a design — prominent horizontal lines and a melding of the natural world with the inside space are hallmarks. I’d been to Crystal Bridges a half-dozen times (far too few), and had even admired the exterior of the house up close last fall. At that time, my husband and I hadn’t realized that tours were reservation-only, best reserved in advance of your visit. Not touring the interior then was disappointing, but walking around outside it did give me a better appreciation for his work. For all that, it wasn’t until I toured inside, listened to a self-guided audio tour and chatted with a helpful, story-rich docent that I truly “got” it.

Background first. Wright built the mid-century modern house late in his career in 1954 — just five years before he died — for Gloria and Abraham Wilson of New Jersey. The young couple, related to a student of Wright’s who had died tragically young, had pleaded with Wright in a letter to please build their house with a $20,000 budget (about $175,000 today). The 86-year-old architect responded with a single sentence: “My dear Wilsons: I suppose I am still here to try to do houses for such as you.”

After dark the house lights up like a lantern.

The 1,700-square-foot home was built specifically for its location overlooking New Jersey’s Millstone River. In 1988, Lawrence and Sharon Tarantino bought and restored the home, but over time, repeated flooding from the river threatened the house. According to Maureen Seymour, the docent mentioned above, they learned of Crystal Bridges museum when Walton was on one of the morning talk shows a few days before it opened. So began talks between the Tarantinos and the museum, resulting in Crystal Bridges acquiring the house in 2013.

Much has been made of the way they reconstructed the house at Crystal Bridges. The team documented every board, screw and nail of the home before deconstructing it, shipping it 1,200 miles across country and meticulously reconstructing every inch exactly as Wright had built it. Because Crystal Bridges is, uniquely among major American museums, nestled into its surrounding landscape, the Bachman-Wilson house’s placement on a ridge overlooking the museum grounds feels true to Wright’s nature-oriented design of its original location. The home is in his “Usonian” style, a term derived from the phrase, “United States of America.” 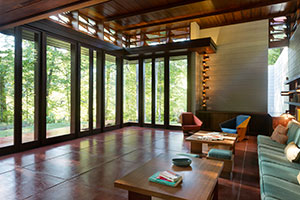 Much of the small house has a ship’s cabin feel, but the great room is airy.

What got me first was the feel of the house the moment I stepped inside the narrow entryway. It was unlike a feeling I’ve had anywhere else, a sense of being hugged by rich wood and stone that didn’t look heavy. Within a few steps, though, that hug gave way to a spacious great room that seemed even more light and airy in contrast. The great room is where I had my epiphany, where I realized the level of mastery I was witnessing. 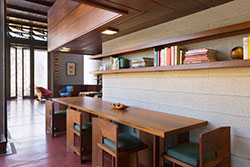 The concrete floor is in Cherokee Red, known as Wright’s favorite color. The earthy red naturally grounds the room. What’s most special about the seemingly simple grid of concrete tiles is that these are the unifying element of the design, inside and out — an almost literal translation of his blueprint paper. The grid’s lines don’t end at the wall. The lines continue up seamlessly through the rest of the room: precisely aligned with the built-in couch cushions, through the placement of the wall’s concrete blocks and built-in bookcases, through the decorative handcrafted woodwork near the roof, across the ceiling, and down again through the wood surrounding the glass panel windows that take up the other half of the room. The cross axis of the grid does the same thing, unifying the elements of the fireplace and the dining room leading into the kitchen. It’s such a simple concept, and yet it was a gigantic “wow” for me.

The wonders continue throughout the rest of the small house, upstairs and down, inside and out. The house is a permanent fixture at Crystal Bridges, viewable six days a week (the museum is closed on Tuesdays). Reservations for the tours, like the museum, are free. Options include a one-hour guided tour or a self-guided audio tour. Definitely ask for the audio device if choosing the self-guided option. The docents at the home are remarkably helpful as well, and full of fascinating stories about the house’s design and history if you ask them questions.

Next time you take a notion to visit Northwest Arkansas, the Bachman-Wilson House is a must-see.