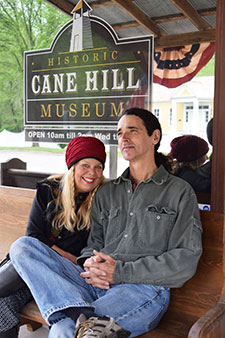 Donna and Kelly Mulhollan tell the story of Cane Hill through old-time music.

Donna and Kelly Mulhollan, Arkansas’ well-known musical duo Still on the Hill, bring incredible, artful skill to story-based historical/musical projects. Past endeavors include Ozark Project (2010), which won the Governor’s Folklife Award for preservation of Ozark traditions; Once A River (2015), which focused on the White River before it was dammed to create Beaver Lake in Northwest Arkansas; and Still A River (2016), a compilation of musical stories that celebrates the famed Buffalo River.

Most recently, they’ve created a fourth compilation, Cane Hill, that focuses on the small community of Cane Hill in Northwest Arkansas. For those who don’t know of Cane Hill, it’s a once-sleepy community that has reinvented itself many times. Founded in 1827 by European settlers, it is the earliest European settlement in Washington County. It boasts many firsts: it was not only the first college in Arkansas to admit women, but also the home of Arkansas’ first public school, library and Sunday School.

Cane Hill is an unincorporated community 25 miles southwest of Fayetteville. Take U.S. 62 West for 14.5 miles, then a sharp left on Arkansas 45 for 3.5 miles. Towns along the way include Farmington and Prairie Grove.

“The town of Cane Hill played an important role in the early settlement days of Northwest Arkansas,” said Kelly, himself a fifth-generation Arkansan. “The town had all but disappeared by the mid-20th century, but today, there’s an exciting revival underway. The old historic buildings are being restored to their former grandeur, and there’s a fine museum that does an incredible job of documenting the rich history of the old township. We were thrilled and honored when the Historic Cane Hill board members approached us about creating a CD project of story-songs that celebrate Cane Hill’s unique history. We hope this music inspires folks to come visit the Cane Hill Museum and experience the rich history and town for themselves.”

Kelly said he and his wife, Donna, spent several months focused on conducting research and interviewing residents, board members, local historians and others about the community.

“We had no shortage of material to explore,” Donna said. “There are many folks in the area that feel deeply connected to the town and are eager to share their stories. The Cane Hill Museum was also an important resource for gathering stories. Several of the artifacts that reside there are featured in songs. We would be thrilled if folks would go to Cane Hill for a ‘treasure hunt.’ You could likely find some building or artifact associated with every song!” 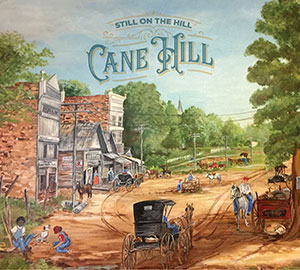 The CD has 12 songs. The cover art features a beautiful painting by Banita Leach Sparks (see page 16) that depicts Cane Hill as it might have looked in the early 1900s. Additionally, Donna created 10 quilts depicting photographs and other artwork. These are displayed during their performances. Another set of these quilts is on display in the newly restored Cane Hill College.
In most cases, songs are collaborative efforts, said the Mulhollans, who produced the CD in their studio, Termite Tracs. Kelly and Donna play all the instruments on the recording, an extensive array of acoustic instruments that includes guitar, banjo, fiddle, mandolin, ukulele, an antique pump organ, dulcimer, upright bass, recorders, and other odds and ends.

For the song “The Bell,” which tells of a bell that made its way from a riverboat on the Arkansas River to a belfry at Cane Hill College, they recorded the bell and used it on the track. The rich tapestry of stories includes the Trail of Tears, an orphan train rider, a Civil War hanging in the wake of the battle at Prairie Grove, a country doctor, a miller, the apple industry, a local banjo player, and the list goes on. The last song tells of a potter named J.D. Wilbur, who dug local red clay and rigged up a contraption that stirred the clay with the aid of a mule. Perhaps the lyrics in the chorus of “J.D.Wilbur’s Pottery” best capture the spirit of this collection:

The wheel of time spins round and round
Like the potter’s wheel of Cane Hill town
Vessels cast in earthen clay
Hold the stories of yesterday.

The Cane Hill concert series and CD release began in October, with a debut for Historic Cane Hill board members and a concert at the Walton Arts Center in Fayetteville. Upcoming concerts are free to the public. In addition, 100 CDs will be given away at each performance. For more information, visit www.stillonthehill.com/cane-hill-project.