Located about 14 miles southeast of Little Rock, the stately Marlsgate Plantation is open for tours and dinners. photo by Kelly Quinn

The Marlsgate Plantation in Scott has for decades provided a gracious historic backdrop for formal weddings and private parties. The new owners of the Greek Revival mansion have added monthly dinners open to the public for “the Marlsgate experience” and are readying four upstairs bedrooms for new life as a bed-and-breakfast in the old Southern style. 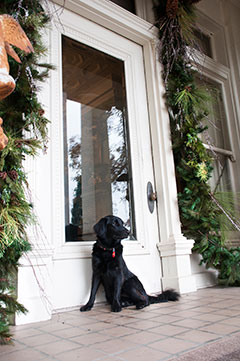 The Southern charm is what attracted Beau and Martha Ellen Talbot to buy the 11,500-square-foot plantation house and surrounding 7.5 acres next to Bearskin Lake earlier this year. Beau, a former banker, contractor and trained chef, and Martha Ellen, an event planner for nonprofits, said they want to honor the history and tradition of the mansion while updating the business plan to make it sustainable for years to come. Also in the works: a supper club and a wine cellar.

“We’re here to preserve the history, preserve the house and perpetuate this lifestyle that a generation does not even have a clue exists,” said Beau. “This is our calling.”

Martha Ellen agreed. “We’re simply the caretakers,” she said, adding that their goal is to learn all they can about the iconic landmark and the people who lived and worked there. “We want to tell the real story. I think people are drawn to it; they are hungry for it, actually,” she said.

Marlsgate sits at the center of the old Dortch plantation outside of Scott in Lonoke County, about 14 miles southeast of Little Rock. The stately mansion was designed by Arkansas architect Charles L. Thompson. Construction of the house, which was home to four generations of the Dortch family, was completed in 1904.

At its height, Marlsgate Plantation was a lucrative farming operation. It covered 7,000 acres and produced cotton, soybeans, hay and corn. More than 100 tenants lived on the property.

The mansion was added to the National Historic Register in 1979, six years before the Dortch family sold the mansion and 7.5 acres to David Garner, who is credited with turning the plantation into a popular events center. The Talbots purchased the property from Garner in February. Garner now owns and operates Choctaw Hall, a bed-and-breakfast in Natchez, Mississippi. 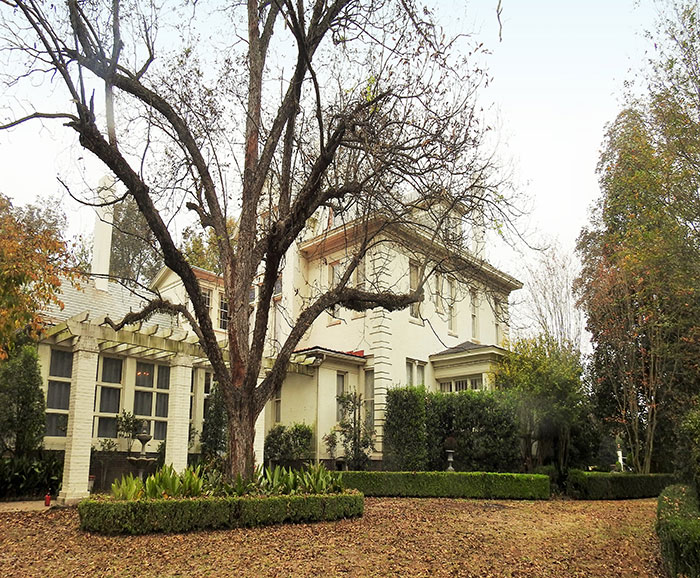 A stately tree stands near the mansion on the east side of the structure. Pecan trees grow here as well and are used to make pralines and other treats for Marlsgate guests. photo by Geri Miller

Visitors looking for an escape from the 21st century will not be disappointed. From Bearskin Lake Road, one steps through a hedgerow then down a stone path to a two-story front porch with large Doric columns that rise more than 40 feet. A second-floor balcony hangs over the front porch.

The mansion is shaded by old oaks and a grove of 14 pecan trees. 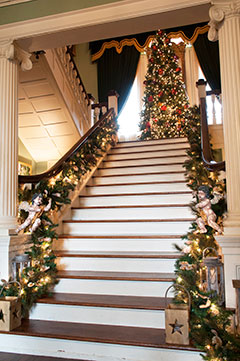 The grand staircase, decorated for Christmas, in the front hall of the mansion.  photo by Kelly Quinn

Marlsgate is the size of five average homes, so everything is on a grand scale. The large front room — called the foyer, but much larger than that word normally suggests — has an extraordinary double staircase at the far end. The main floor of the estate includes a large drawing room, dining room, music room, master bedroom, plantation office, and a separate kitchen and service wing.

Upstairs are the four bedrooms that will welcome overnight guests before the end of 2018.

Original beveled glass windows, sliding oak pocket doors, handcrafted woodwork and six marble fireplaces are located throughout the 30 rooms. In all but one room, the 14-foot ceilings are covered with ornate pressed tin. 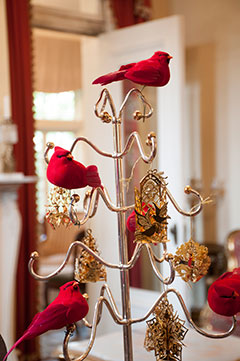 Much of the antebellum furniture and other antique furnishings, including photographs and paintings, still belong to Garner, Beau said. The chandelier in the foyer, a large “farm table” in the kitchen and a secretary in the first floor bedroom were in the house even when the Dortch family owned it.

The house has a basement, where the wine cellar will be located, and a third floor. Only the main floor and second-floor bedrooms are accessible to the public. There are four more bedrooms on the third floor, where household staff slept back in the day, but they are accessible only by a narrow, European-type staircase.

Outside the house, on the east side, is the old carriage house where the Dortch family kept a carriage, surrey and cotton wagon, and stabled their horses. It has already been retrofitted as a gift shop with a Southern country lifestyle theme in every piece of merchandise: postcards, photographs, paintings, handmade dolls and virgin sunflower seed oil produced at the nearby Wayne Plantation. 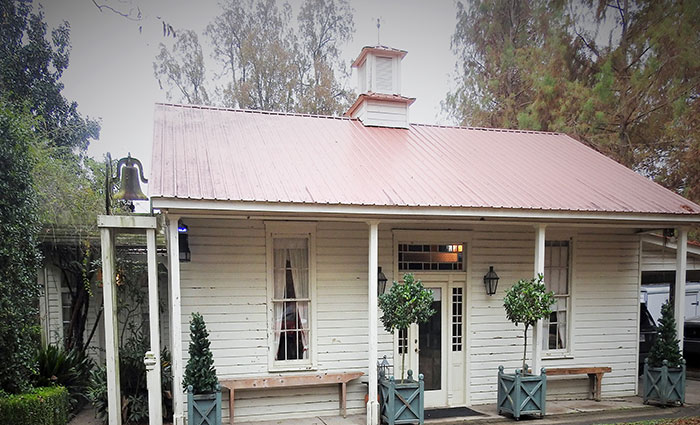 Next to the carriage house are a series of five “hidden gardens” surrounded by large holly hedges. They were designed by renowned Arkansas gardening and lifestyle expert P. Allen Smith, who also filmed some of his early television shows at the plantation, Beau said. 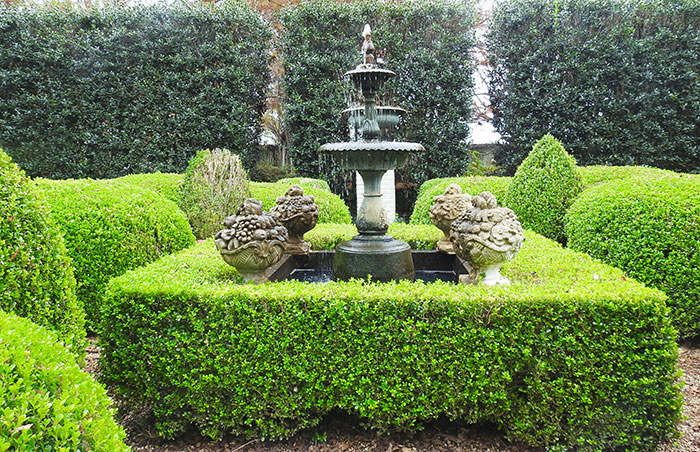 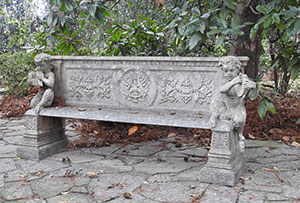 An 18th-century bench from Italy provides a place of respite within the gardens. photo by Geri Miller

Ideal for peaceful walks or seated contemplation, the gardens have become central to the wedding experience at Marlsgate. A bride who has dressed in the carriage house then passes through gardens with names like “Garden of First Reveal” and “Bride’s Garden” as she makes her way to the path that leads to the front porch of Marlsgate.

Behind the mansion is a 3,000-square-foot “summer home,” where the Talbots live. There is also a large conservatory where plants can grow in the winter months and Japanese koi swim in a pond. The conservatory, with its glass walls and high ceiling, will eventually be available for small teas and other gatherings, Beau said.

In a field on the west side of the house and visible from Bearskin Lake Road is a large tent, 40 feet by 85 feet, where wedding receptions, parties and other events take place. The 2,035-square-foot kitchen, located at the back of the main house, includes a pastry kitchen, a large cooking area and a prep area.

Upgrading the kitchen to handle large dinners and bed-and-breakfast guests is among a number of renovations being made throughout the mansion to comply with current safety codes and improve efficiency. Rewiring is being done throughout the house, and the original newspapers and horse hair behind the walls will be replaced with thoroughly modern, soybean-based insulation.

A much more noticeable change: private bathrooms for the guest rooms on the second floor. Currently, there is only one bathroom in the mansion.

Another long-term project is to obtain a grant for solar energy-generating roof tiles, Beau said.

When the house renovations are completed, work will then continue on the grounds, the couple said.

“After the bed-and-breakfast gets going we’re going to put up a series of geometric raised gardens and … from the farm to the table we’ll grow the herbs and vegetables,” he said. “It will be aesthetically pleasing, and people here with tours or staying at the bed-and-breakfast will be able to get a glass of wine and walk through the raised gardens on a series of paths.”

William Dortch, the patriarch of the plantation at its height, “was unbelievably successful and creative,” Beau said, adding that Dortch was a pioneer in cross-germination of cotton seeds. The Dortch Cotton Gin exhibit in the Plantation Agriculture Museum in Scott is named for him.

Since moving into Marlsgate, the Talbots have tried to learn as much as they can about the Dortch family. During this process, they discovered that several area residents are Dortch descendants who had not been in the house in years — or ever.

“The Garner family took the house in a direction it had never been. It became an events center for weddings. It was no longer a working plantation, so many of the Dortch family had not been back in the house in years and decades,” Beau said. “So it was Martha Ellen’s and my quest to find the Dortches.”

They met George Dortch, a 90-year-old grandson of William Dortch, who had not been in Marlsgate for 50 years. In fact, he was so uneasy about returning to the ancestral home that he entered from the kitchen in the back. “He really didn’t have warm and fuzzy feelings about it, but things changed,” Beau said. Once George saw how the furniture, antiques and all the decorations accentuated the old mansion’s Southern charm, he cheered up.

“He came in the back door and left out the front door,” Beau added.

Rediscovery is Beau and Martha Ellen Talbot’s personal story as well. The two Stuttgart natives were high school sweethearts and attended the senior prom together. After high school, they went their separate ways until January 2016, when they saw each other at a Stuttgart restaurant.

The couple instantly reconnected and were married the following September.

The idea of running a bed-and-breakfast was something they had been thinking about, so the newlyweds looked in vain for one to buy. During their search, a mutual friend told them that Marlsgate was for sale. Their first visit to the plantation was on a Friday. Two days later, the Talbots and Garner sat in the drawing room of the estate and drafted a one-page purchase agreement. Beau said Garner was considering another offer at the time, but he liked their idea of keeping the estate’s current charm while adding the bed-and-breakfast.

“It was meant to be,” Martha Ellen said of their marriage and the subsequent purchase of Marlsgate.

Owning the plantation has allowed them to use their talents in a way that makes them both happy, Beau said. “Her event planning and organization and my mechanical part of the presentation, getting the food out on time, has allowed us to blend our talents.” 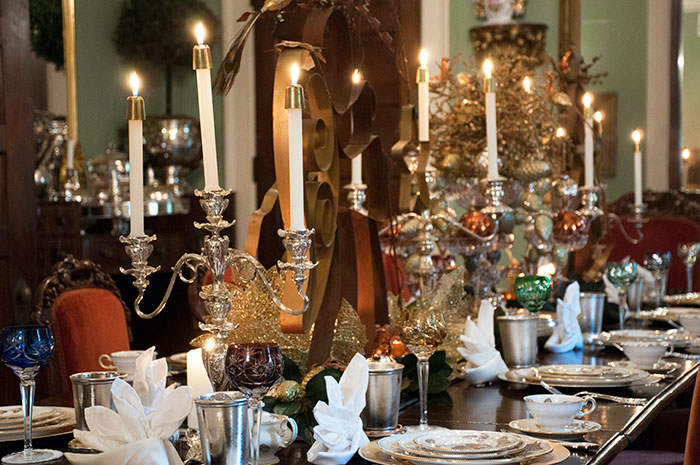 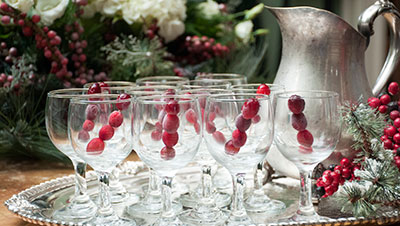 During a recent tour, the Talbots served punch in goblets with cranberry-skewers. photo by Kelly Quinn

In August, the couple began hosting monthly “plantation dinners.”  They also have offered holiday brunches, and a monthly supper club will begin in 2018, with members having the opportunity to learn about various nonprofits that are near and dear to Martha Ellen’s heart.

For more information about events and reservations, check out Marlsgate Plantation on Facebook.