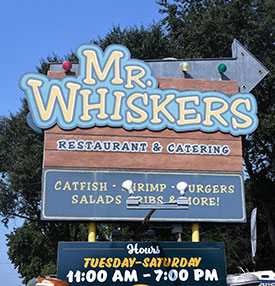 Mr. Whiskers has been a Hot Springs fixture since 2009.

When Scott Irwin was a small boy growing up in Hot Springs, he met Col. Harland Sanders, founder of Kentucky Fried Chicken, while the colonel was visiting a local franchise owner. That meeting made a huge impression on Irwin, owner of Mr. Whiskers in Hot Springs.

“I’ve never wanted to do anything else,” he said with a smile. “I tried something else for a very short time but came right back to the restaurant business. Col. Sanders gave me a signature card, but I can’t find it.”

I’m thinking Col. Sanders must have whispered a secret recipe to the young Irwin, as everything I sampled at Mr. Whiskers was finger-licking great.

He opened Mr. Whiskers after operating a series of successful restaurants in Texas and Arkansas. The restaurant’s current location is a few miles down Malvern Road from where Irwin first worked at a restaurant while in high school.

“I have the best staff on the planet,” Irwin said. “Many of my team members have been with me since we opened in 2009.”

The most popular menu items include the hand-breaded USDA catfish fillets, shrimp and chicken 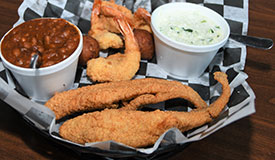 Catfish and shrimp, served with hush puppies, beans and slaw, make for a classic meal at Mr. Whiskers.

tenders. I opted for a combo platter that included two cooked-with-love catfish fillets and four large, lightly breaded shrimp, joined by fries, house-prepared slaw and hush puppies. The catfish and shrimp tasted as excellent as they looked. The secret mixture used to coat the tasty morsels was outstanding. I dipped both the catfish and shrimp in a bit of Mr. Whiskers’ secret sauce, which made them yumm-o good.

Another standout was the grilled shrimp salad. The shrimp had a nice spicy kick that married well with the bed of greens topped with tomato and 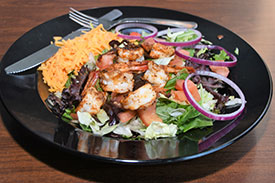 A lighter catch at Mr. Whiskers is the grilled shrimp salad.

Ever heard of a top-shelf, butcher-style hamburger at a catfish place? A few catfish are still swimming in the pond due to the great demand for the hamburgers at Mr. Whiskers. The classic hamburger featured USDA Angus chuck seasoned and cooked just right on a flat-top grill and topped with cheese, bacon and assorted fresh vegetables. The flat-top gave it that nice, griddled texture.

Irwin told me he is also known for his smoked pork ribs. Hmmm. What can’t this guy cook, right? I 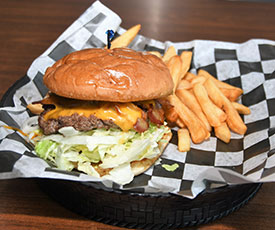 Mr. Whiskers is known for catfish, but the burgers are equally outstanding.

tried the meaty ribs and will testify that he has also mastered the smoker. The smoky ribs featured great flavor and a fine smoke ring. I enjoyed the ribs without Mr. Whiskers’ barbeque sauce, until I tried the sauce. I’ll have to order the ribs again, so I can decide which method I prefer. The ribs were served with Mr. Whiskers’ baked beans, which featured bits of smoked pork and delivered one heck of a flavor.

Po’boy Sandwiches in catfish, shrimp, crawfish and chicken varieties are available. Diners can add a piece of fish or chicken or shrimp or a rib to any dish for a little bit more. Mr. Whiskers’ other sides include pickled green tomatoes, breaded okra, potato salad and side salads.

Mr. Whiskers’ website address is greatcatfish.com. A well-deserved address, but it could easily be www.everythingisgreat.always. 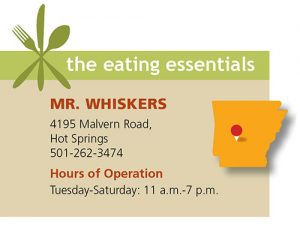