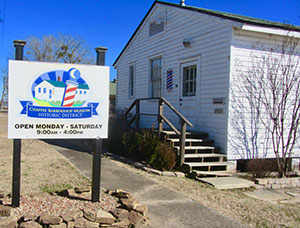 The former Fort Chaffee barbershop where Elvis Presley got his first Army haircut is now a museum. photo Marcia Schnedler

The question most often asked by visitors to Chaffee Barbershop Museum gets a disappointing answer.
“They want to know whether we have a lock of Elvis Presley’s hair on display,” says Rod Williamson, curator of the place where the King of Rock ’n’ Roll got his first Army haircut on March 25, 1958. “My reply is, ‘Sorry, but we don’t.’”

What this museum at the former Fort Chaffee does have, as the storied haircut’s 62nd anniversary looms, is a wealth of engaging exhibits that provide a pop-culture flashback to the Eisenhower era.

At the time, the notion of draftee Presley’s pompadour (aka ducktail) being sheared to stubble sparked a flurry of pleading letters to federal officials, mostly from young female enthusiasts.

A copy of one such missive is posted at the former barbershop in Chaffee Crossing Historic District, nine miles southeast of downtown Fort Smith. It was mailed to President Dwight Eisenhower and signed by Linda, Sherry and Mickie.

Writing from rural Montana, they issued a fervent plea: “If you cut his sideburns off, we will just die. … We beg you please, please don’t give him a G.I. haircut.”

The original letter resides at the august Eisenhower Presidential Library in Abilene, Kansas. It’s a clue to how huge a deal the haircut was to some of the fans who’d squealed and screamed through his hip-shaking performances, including early ones in Arkansas. 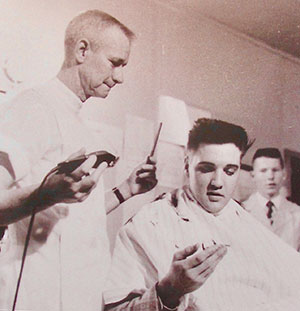 Elvis Presley poses with a hunk of his hair trimmed by barber James Peterson at Fort Chaffee. photo courtesy of Chaffee Barbershop Museum

“Every soldier, active and retired, that I’ve shown around has mentioned that Elvis was not subjected to the traditional military buzz cut,” says Jan Honeycutt, a schoolteacher and volunteer guide who played a role in developing the museum. “I don’t know if the barber feared angry fans or what he was thinking.”

Williamson agrees that Presley got “a bit of favoritism” for what was dubbed “the haircut heard ’round the world.”
He adds, “Elvis himself wanted to be treated just like any other draftee.”

But two years after release of his first hit album, the 23-
year-old Presley was not just any other draftee. He’d appeared on national television with Jackie Gleason, Milton Berle and Ed Sullivan. His pelvic gyrations were so controversial that Sullivan’s camera showed him only from the waist up.

Given that meteoric fame, it figures that the barbershop was swarming with newspaper and television cameramen, including crews from the three national networks. As Presley sat in an end chair, photographer Jack Cleavenger from Fort Smith’s Southwest Times Record paper asked him to say something.

The hair, Williamson explains, was swept up along with the trimmings from that day’s other new soldiers. Then it was burned in an incinerator, as was common practice.

Some museum visitors, according to Honeycutt, think that Presley did his basic training at Fort Chaffee. He actually arrived for orientation a bit before midnight on March 24 and left the morning of March 28 for the training at Fort Hood, Texas. The remainder of his two years in the Army was served in Germany.

The museum chronicles his brief stay at Fort Chaffee with dozens of photographs on five enlarged mock-ups of the 45-rpm records popular then. They were created by Fort Smith’s Southside High School juniors in Honeycutt’s and fellow teacher Michele Walker’s classes. A booklet spun from the project is available at the museum for a suggested $10 donation.

Because the Fort Chaffee barbers were civilians, the new soldiers had to pay for their haircuts out of the $7 they’d been advanced for their first week of duty. The price of 65 cents was rung up on a cash register now displayed at the museum.

“Elvis forgot to pay before he went back to his barracks,” Honeycutt notes. “So, they had to call him back. Someone had to tell him, ‘Private Presley, you owe 65 cents, please.’”

Honeycutt notes that the barbershop has welcomed visitors from all 50 states, along with a number of foreign 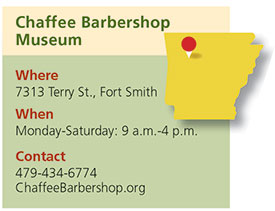 countries. She’s sure that the King of Rock ’n’ Roll has maintained his popularity generation after generation, nearly a half-century after his death.

“I’ve had visitors say they get the feeling that he’s still in the building,” she says. “And I can count on one hand the kids who said they’ve never heard of him. Elvis still lives, even for people who were not born in his era.