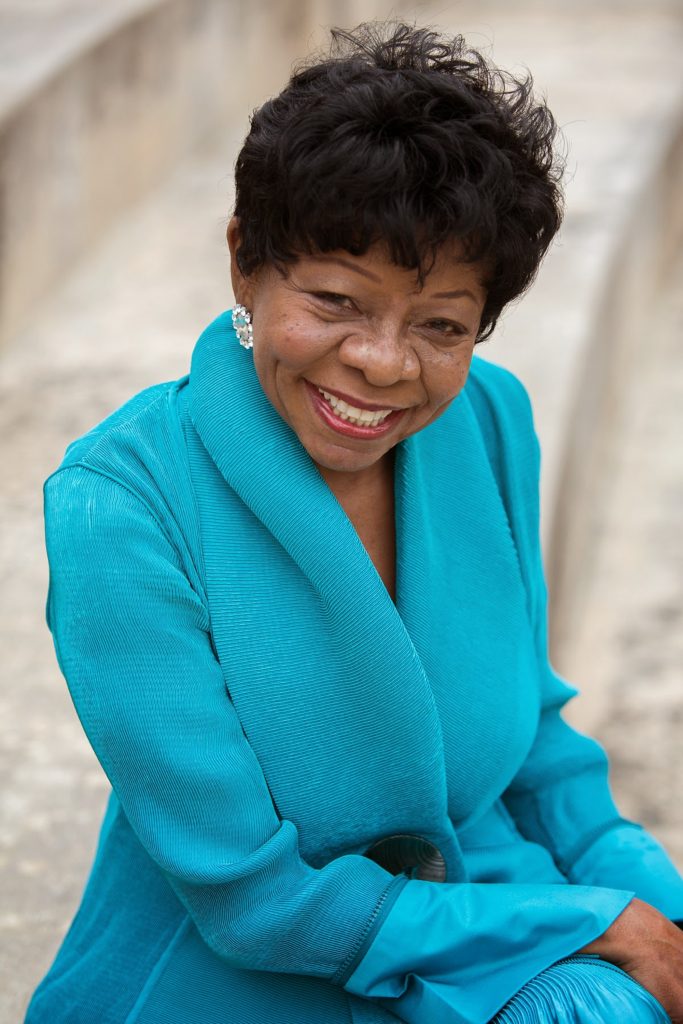 Charolette Tidwell, a petite Fort Smith woman with a giant smile and bigger laugh, is a bona fide action hero.

Not of the Arnold Schwarzenegger variety, although she could probably do that, too. Rather, Tidwell is an everyday hero who is constantly springing into action; when she sees something that needs doing, she cannot help but start doing it.

In Tidwell’s world, everything is possible with hard work and some applied imagination.

The nonprofit does all this with no paid staff. For many of the past 22 years, Tidwell mostly self-funded operations from her pension, choosing a simpler life so she could give more to her city. 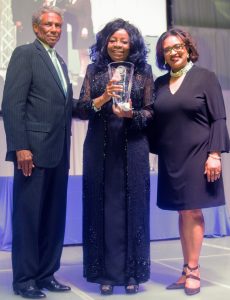 In 2018, Charolette Tidwell, received the President’s Award from the Arkansas Black Caucus for her work at Antioch.

Her efforts have drawn attention. NBC Nightly News with Lester Holt aired a story about Tidwell in 2015. Then followed stories in People, Reader’s Digest, Woman’s Day and other outlets. Gov. Asa Hutchinson, the University of Arkansas and the Girl Scouts have honored her. Perhaps most notably, in 2017, Tidwell became one of 10 people chosen from 6,000 nominations nationwide to be a L’Oréal Paris Woman of Worth, a program honoring women who make significant contributions to their communities. In 2020, L’Oréal Paris did her one better, naming her the recipient of its 2020 Karen T. Fondu Impact Award, an honor chosen from among all former Women of Worth to recognize a visionary who has continued to serve her community in new and creative ways since receiving the distinction. It’s a “best of the best” award, you might say.

While the awards are appreciated, for Tidwell, the reward is seeing positive change. “The work,” she says, “has nothing to do with Charolette. It’s not about me. It has everything to do with knitting back communities to be whole.”

Tidwell wants for others the kind of close community that she had growing up. The woman who sat next to Gayle King and Dr. Mehmet Oz at a L’Oréal Paris awards dinner in her honor has fond memories of her childhood, despite growing up in poverty.

Born in Fort Smith on Valentine’s Day, 1946, she was one of 10 children sharing a modest home on the city’s north side. Her family had a garden, a cow and some chickens. But most importantly, they had a wholly supportive neighborhood. She remembers the local families shared whatever abundance they had with each other so that no one went without.

“We lived in poverty, but my mother never taught us we were poor,” she says. “I never went hungry. I was never without shoes or clothes. I never had to sleep in a car. Because we lifted each other up. The only clue I had that we were poor was that our toilet was outdoors.”

Surrounded by love, children can imagine exciting futures, no matter their family’s income, she says. She did, after all. 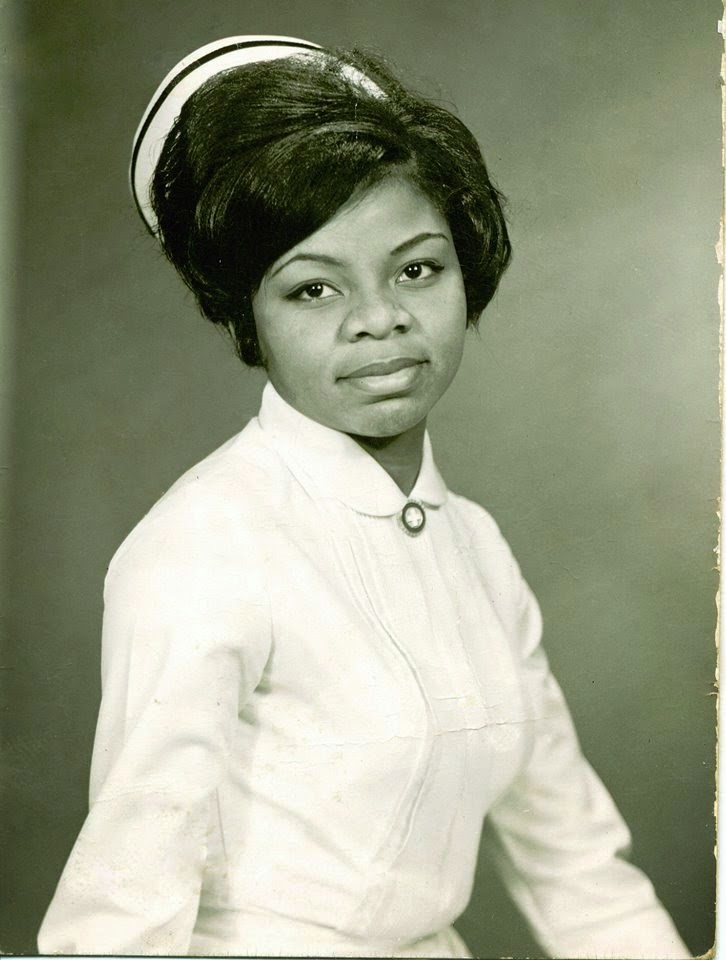 In 1965, Tidwell started nursing school at St. Edward Mercy, which had only started accepting Black students the previous year. To her surprise, what they didn’t accept was married women. When she announced she’d just gotten married to Lawrence Tidwell, the school summarily kicked her out.

“They considered me a ‘tainted married woman’ back then,” she says with a hearty laugh. When Sparks, the other large hospital in town, started a nursing program she could attend, Tidwell enrolled.

She began working at Sparks part time as a student in 1966, at a time when the hospital had no Black patients or employees. She was the first. As such, Tidwell felt the pressure to excel and applied the work ethic her parents had instilled in her: Never take a paycheck without earning it.

After graduating, she went to work at Sparks full time. She advanced quickly, gaining promotions she never had to seek. Tidwell says each time her employer would tell her what position they had in mind for her, she’d protest she couldn’t do that. “Yes, you can,” was the response again and again. And, so, she did, ultimately becoming director of nursing. Along the way, she added to her R.N. degree a bachelor’s in nursing and a master’s in education.

Tidwell worked happily at Sparks until 1992, when she left her plum position to do something entirely unexpected.

Free day care, on her dime

“I got this wild hair that I wanted to open a free day care center for young mothers who couldn’t afford to get a degree,” she says. “I wanted to change the trajectory of the kids.” A mother of two herself, she opened two day care centers funded entirely from her savings.

Using her trademark charisma and drive, she also convinced her connections at Westark Community College to give the mothers free tuition. “I told them if I could take care of these women’s children for free, then they could give the courses for free,” she says, laughing now at her own gumption.

It took a year to use up her savings. Then, to keep the centers going, she accepted a new position at Fort Smith-based Beverly Enterprises. To her shock in orientation, she learned Beverly was the world’s largest nursing home company. When the CEO asked her to start an employee education department, she insisted she couldn’t do a project that big. Once again, she was told, “Yes, you can.” So, she did.

While there, she developed educational materials and programs that became the first of their kind used globally throughout the industry.

Tidwell retired in 1999, two years after the death of her husband, Lawrence, a sergeant with the Fort Smith Police Department. Because one of Lawrence’s passions was mentoring kids, he had started the nonprofit Lincoln Youth Center. 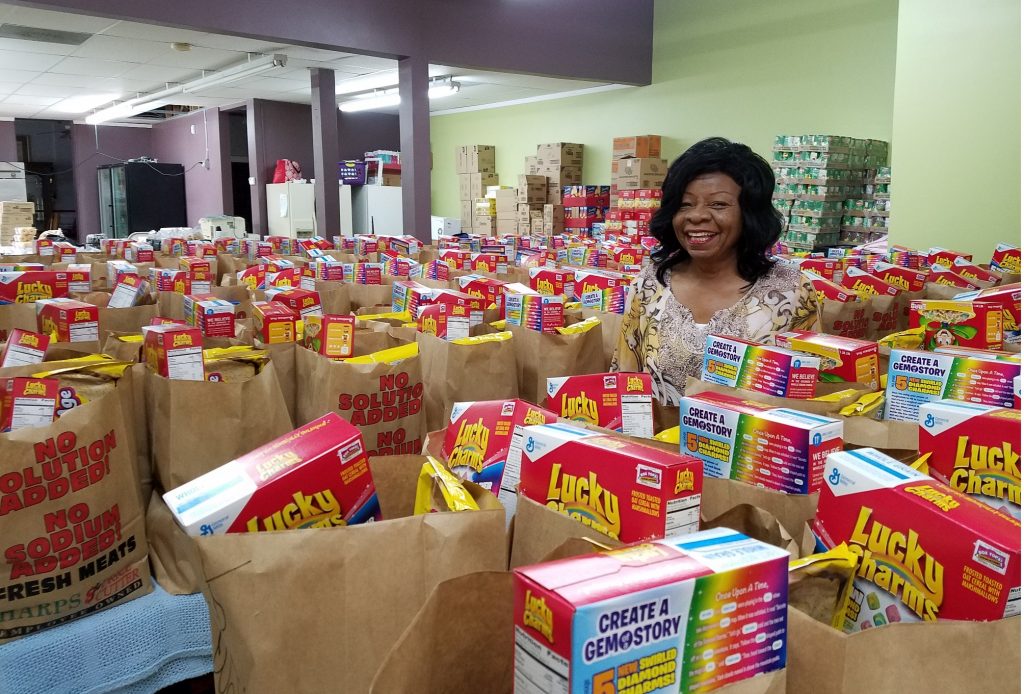 Antioch’s food pantry provides an essential service in a community where one-in-five people are food insecure.

Tidwell wanted a similar project of her own to continue Lawrence’s work. She called her center Antioch, after the city where people were first called Christians. 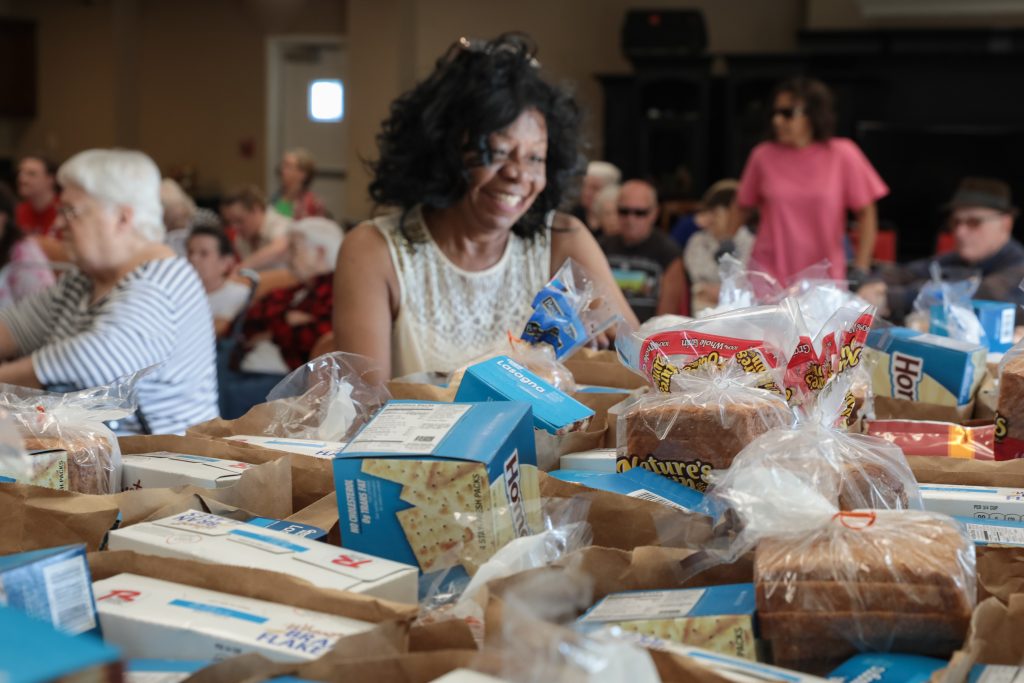 Asked about the 10- to 12-hour unpaid workdays Tidwell reportedly puts in six days a week, Kupchick says with a laugh: “Oh, it’s much more than that! Her brain does not stop asking, ‘What else can I do? How else can I make this better?’ I’ve had calls and texts from her at 10:30 at night. That drive is who she is. I’ve never seen a person who could work so hard.”

For example, a few years ago Antioch started a community Discovery Garden to give children STEM education through gardening, while growing food they could take home and eat. Kupchick speaks of one summer night when he drove to the garden: “It was 9 p.m., and she was out there with a garden hose hand-watering 2 acres of land. It’s like, ‘When does this Energizer bunny turn off?’” 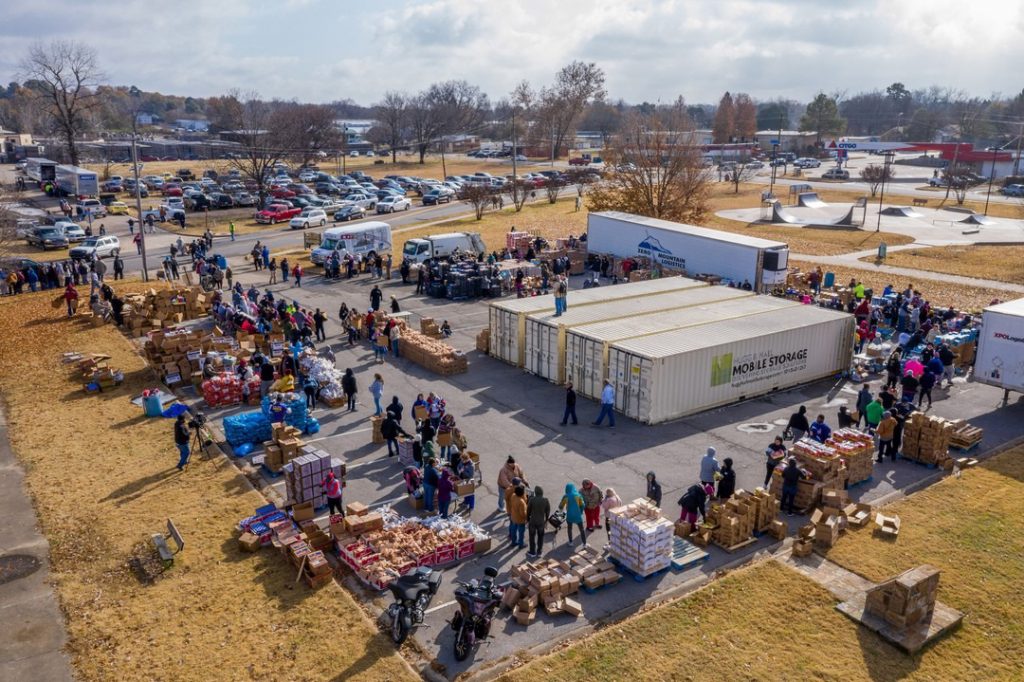 A 2019 food pantry event in Martin Luther King, Jr. Park shows the scale of the operation, even before demand spiked sharply during the pandemic.

Tidwell says the work energizes her, and there’s too much to do to slow down.

When COVID-19 hit, Tidwell organized a drive-thru food pantry at the back of Antioch, but it couldn’t meet demand. So, Antioch’s volunteers hosted massive weekly giveaways of food in local parks, serving thousands in a contactless drive-thru.

The numbers of people receiving food assistance steeply increased between January 2015 and February 2020. Within months, Antioch was serving more than 30,000 people.

The former nurse is adamant about good nutrition. Every week of the year, trucks arrive at Fort Smith schools loaded with fresh fruits and vegetables for children to take home.

And Antioch volunteers deliver boxes of nutritious food to 14 local assisted living facilities, something near to Tidwell’s heart. “I had seen elderly decline in nursing homes for too long,” she explains. “If we can keep them on their feet cooking food in the kitchen, they’ll stay independent longer.”

Thanks to Tidwell, the Fort Smith police deliver Antioch food boxes to the food insecure they encounter on domestic disturbance calls, and the Sebastian County Sheriff’s Office and Arkansas Game and Fish Commission agents also take 80-pound food boxes to 660 rural families who need food but lack transportation to get groceries regularly. 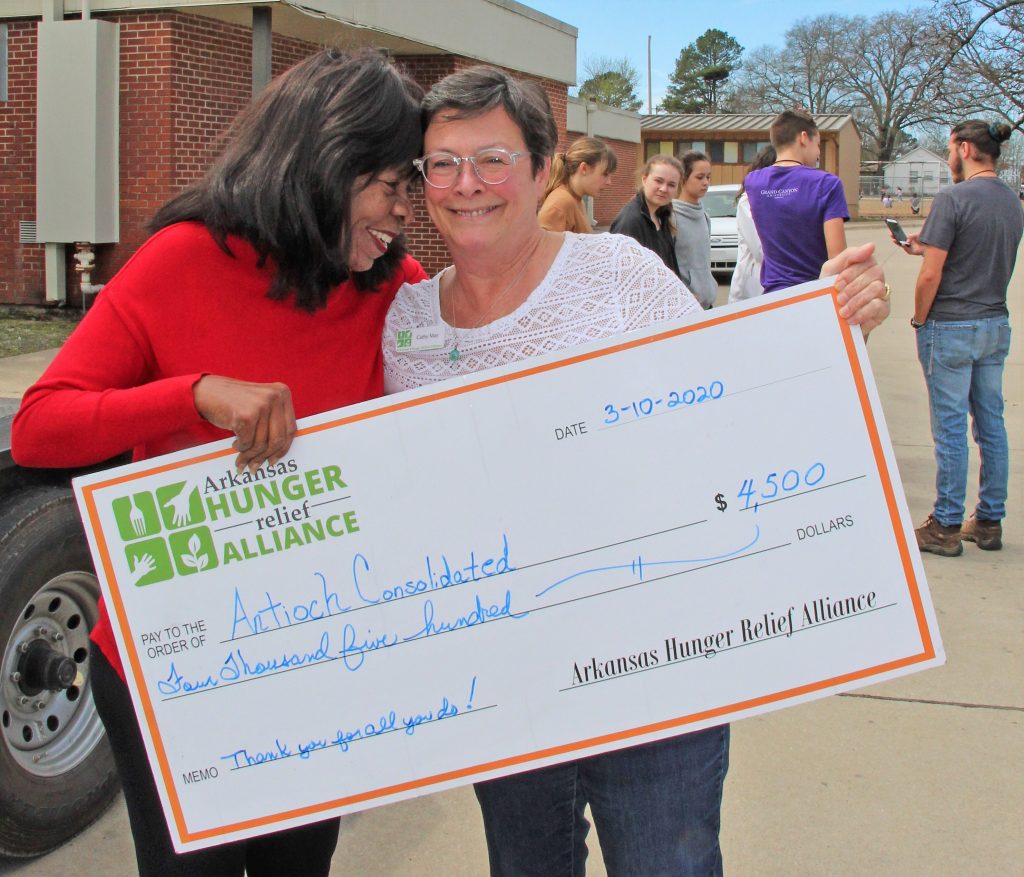 The Arkansas Hunger Relief Alliance is one appreciated source of funding for Antioch. Charolette Tidwell largely self-funded the nonprofit for years.

Thanks to a relationship Antioch nurtured with The Urban Institute, Sebastian County was one of six counties studied for a pilot program to build a nationwide poverty dashboard. Tidwell says the eye-opening numbers are a road map to what needs to be done. Likewise, the Robert Wood Johnson Foundation selected Antioch for a six-month coaching and mentoring program that strengthened local leaders’ commitment to community social equity efforts.

“I’m a big believer in building relation-ships as you’re building community,” she says.

Antioch also works with the courts to coordinate community service for youth and adults coming out of the prison system. “We put them into a work environment here that heals them,” Tidwell says. “We tell them, ‘You’re valuable, you’re needed, and we will help you.’” 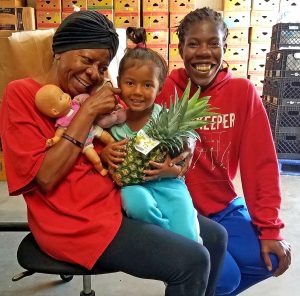 She has a vision for Fort Smith and beyond. “I was raised here in a knitted community, so I know it’s possible,” she says. “We need to build each other up, you know? No matter the circumstances.”

People have sometimes told Tidwell she’s dreaming too big, that communities can’t change so much.

Yes, she tells them, we can.

To learn more about Antioch for Youth and Family or to support its operations, visit antiochyouthfamily.org or follow them on Facebook @AntiochYouthFamily.