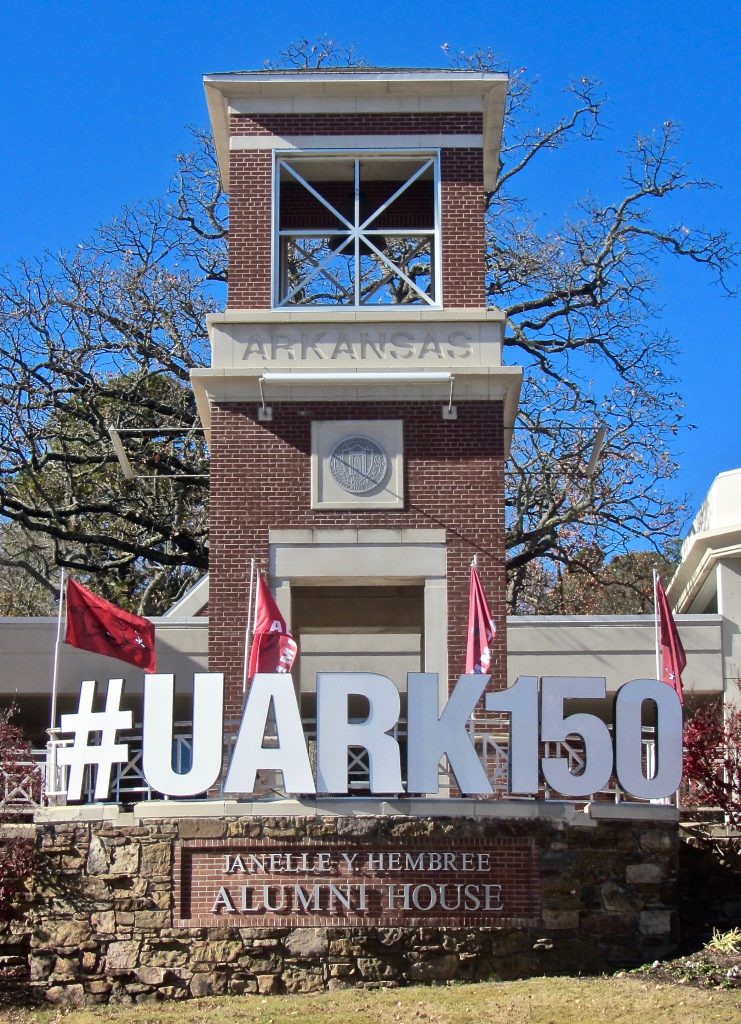 A sign on the Alumni House at the Fayetteville campus heralds the sesquicentennial of the University of Arkansas.

The University of Arkansas is celebrating the 150th birthday of its first class.

To mark the sesquicentennial of that humble opening day on Jan. 22, 1872, a yearlong celebration is continuing at the university. Scheduled for the anniversary date is a festive opening of the new Student Success Center, the campus hub for academic support services.

Another highlight will be the Feb. 12 premiere of If This Walk Could Talk. The film about the university’s storied history takes its title from the more than 170,000 Senior Walk names of graduates etched into sidewalks around the landmark Old Main building.

Creation of the school, known as Arkansas Industrial University until 1899, was funded by the Morrill Land Grant Act, passed by the U.S. Congress in 1862. After the Arkansas General Assembly voted to establish the university, Washington County won the site bid over two competitors.

The school’s 1872 building, as the Encyclopedia of Arkansas reports, “was fitted with seats, blackboards and stoves. Of the eight students at the new university, one was a woman, Anna Putman. That reflected local attitudes in the tradition of the famed Fayetteville Female Seminary, at a time when women had little schooling of any kind. UA began and remained coeducational.”

At first, there were only three faculty members. One student reported having taken a stagecoach from Ozark to Fayetteville along the sinuous unpaved route now known as the Pig Trail. On some steep hills, passengers had to get out and push the coach. Conditions on campus also could be rough and ready, as when a student that first year reportedly was wounded in a knife fight over a math problem.

Given its modest beginning, while Arkansas was still recovering from the Civil War, the university finished a remarkably ambitious project just three years later. Construction was completed on Old Main, still the heart of the campus.

The towering Second Empire design with unusually thick brick walls was the largest building in Arkansas when it opened in 1875. The 90,000-square-foot structure initially housed most classes, administrative offices and even some student sleeping rooms.

Having weathered several major fires, Old Main fell into disrepair and was closed in 1981. It was restored and reopened a decade later, thanks to a major fund drive. Lining corridors are many markers denoting its important history.

One of the most endearing is a plaque bearing a photograph of Nettie Barnett Boles, the university’s first woman graduate, in 1876. The inscription notes: “In the spirit of Arkansas with her diploma in the saddlebags, she rode off on a mule to her first teaching assignment.” 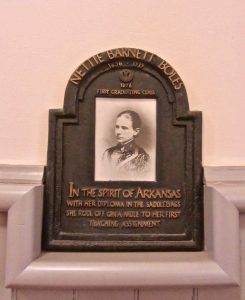 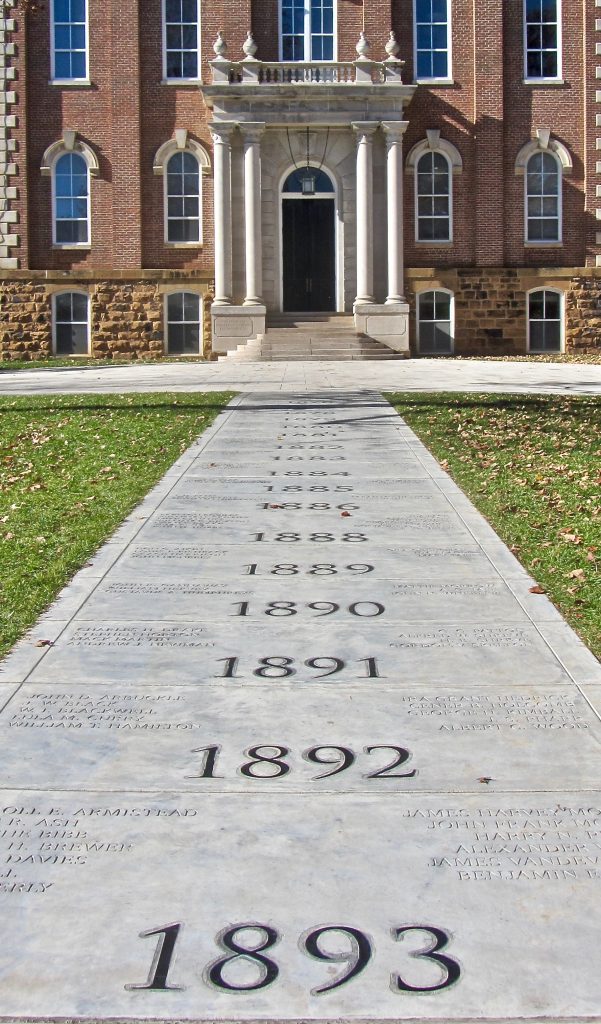 There are more than 170,000 names etched into the Senior Walk at the University of Arkansas, Fayetteville.

Old Main is the anchor for the National Register of Historic Places’ University of Arkansas Campus Historic District, whose 25 buildings occupy the school’s core. Visitors can comfortably walk the complex, strolling if they wish along the nearly 4 miles of the concrete Senior Walk. Available sidewalks are expected to provide enough space for future names until at least 2030.

The lawn outside Old Main has its own history. In the late 1890s, part of it was used as the university’s first football field. Sheep grazed on part of it. The lawn contains the Spoofer’s Stone, a limestone chunk that fell out of an oxcart and broke during construction. The stone served as a rendezvous spot for male and female students during the 1880s, when the two sexes were barred from mixing.

Another prominent structure is Ella Carnell Hall, built in 1905 as the first residence reserved for women. Like Old Main, it fell into disrepair. Closed in 1991, it was then renovated as a 50-room inn and upscale restaurant, which is packed on weekends when the football Razorbacks are playing at home. 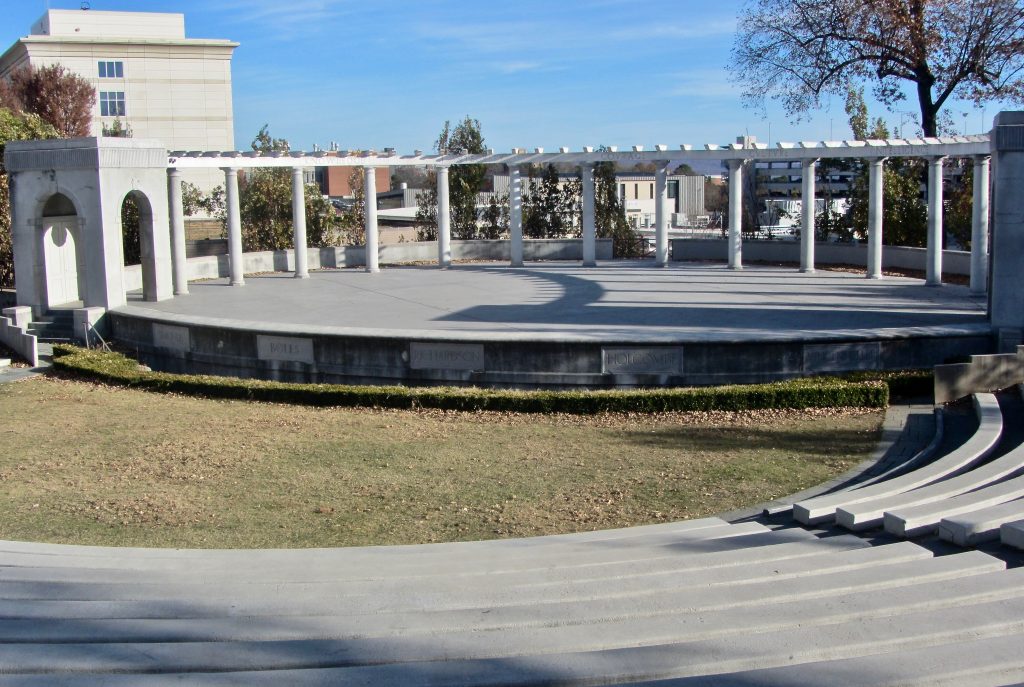 Chi Omega Greek Theatre, modeled on a structure in classsical Athens, was a campus gift from that sorority.

Along with the landmark buildings, the campus offers a hint of ancient history at the Chi Omega Greek Theatre, inspired by the classical edifice on the slopes of Athens’ Acropolis. It was a donation from Chi Omega sorority, founded in Fayetteville in 1895.

A century ago, the campus celebrated its 50th anniversary with festivities that included a parade and a pageant. In 1922, student life was different from today in a lot of ways, as described by Paul D. Haynie three decades ago in Arkansas Historical Quarterly: “The most hotly contested issue began immediately after the 1920s opened. The controversy came over the new dances with their suggestive movements. Dances called the ‘Shimmie,’ ‘Camel Walk,’ ‘Tickle Toe’ and ‘Scissors’ were considered obscene and anyone doing them at school dances was reprimanded or asked to leave by the chaperones.” 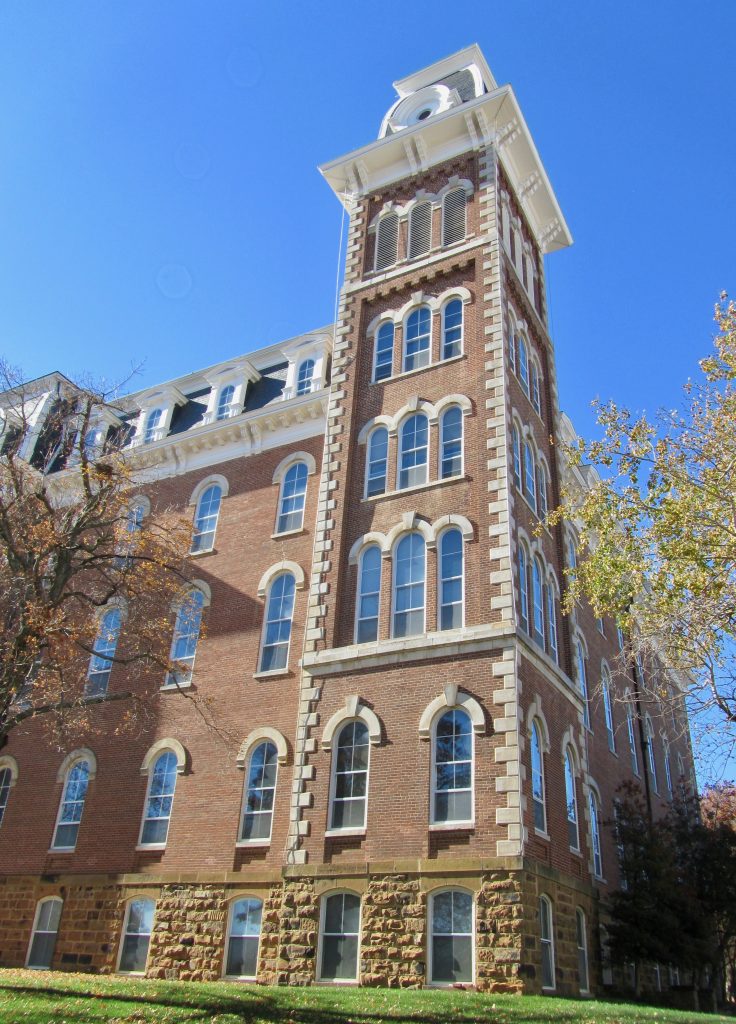 Old Main, opened in 1875, remains the heart and soul of the campus.

Female students faced extra scrutiny: “Through 1923, all university women took a six-week course in moral living, but the changing role of women brought controversy. Main concerns were: excessive use of makeup, wearing trousers and smoking.

“The coed was warned that too much makeup cheapened her in the eyes of men and even posed a health problem. As to trousers, the women were supported in their efforts to wear them — but on cold days only. The greatest worry concerned the increasing number of women who smoked. ‘Is this what they came to college to learn?’ was the lament.”

If those attitudes now seem quaint or whimsical, the university’s bicentennial in 2072 surely will inspire bemused remarks about campus life back in 2022. It’s hard to guess what will seem oddly old-fashioned in another 50 years.

But it’s a fair bet that names will continue to be added each year to the extended Senior Walk. And that Old Main will still stand tall.

Information about the history of University of Arkansas, Fayetteville and its sesquicentennial activities is available at uark.edu.