From a distance, the work of art just outside the William J. Clinton Presidential Center in Little Rocklooks like a giant fish of many colors. 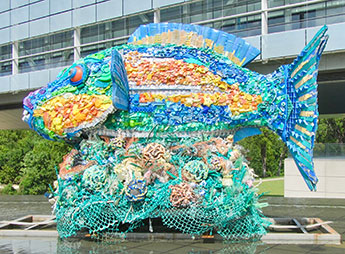 Visitors to “Washed Ashore” at the Clinton Presidential Center are greeted outside the entrance by “Priscilla the Parrot Fish.” Parts include bottle caps, toothbrushes and fishing lures. photo Marcia Shnedler

Closer up, that impression turns out to be a load of trash — literally so. The big fish is a sculpture of throwaways, crafted from flotsam and jetsam by Angela Haseltine Pozzi, an Oregon artist and eco-crusader. It delivers an environmental message setting the stage for “Washed Ashore: Art to Save the Sea,” a powerful yet playful exhibition at the Clinton Center through Oct. 27.

Like some of the more than 20 aquatic figures depicted in the show, the outdoor sculpture has an alliterative name: “Priscilla the Parrot Fish.” Typical of the accompanying signs, Priscilla’s is informative as well as engaging.

It points out “the plight of the bright parrot fish, whose coral-reef homes are endangered because of marine debris and pollution.”

Then it poses a play-along question: “Can you find these marine debris items in this sculpture?” 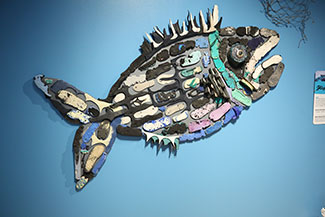 Inexpensive plastic shoes and sandals recovered along seashores make up “Flip Flop Fish.” Fish bites can be seen on some fragments. courtesy of The Clinton Presidential Center

The choices reflect the flabbergasting variety of discards that are washed up from oceans: toys, bottle caps, buoys, a pink comb, a plastic corn cob, lighters, beer cans, a bowling pin, toothbrushes and fishing lures. And those are just a sample, in a presentation that appears to be having a real impact in Arkansas.

The exhibition is arrayed on the first and third floors of the Clinton Center, with some of the most engaging sculptures on the lower level. A number are tagged with such lilting names as “Eli the Eel,” “Stella the Seahorse” and “Greta the Great White Shark.”

A few of the sculptures are interactive, one of the most lively being the “Marine Debris Drum.” This percussion set is formed from pieces of polystyrene docks and buoys that sank and were crunched by deeper ocean pressure to half their original size. 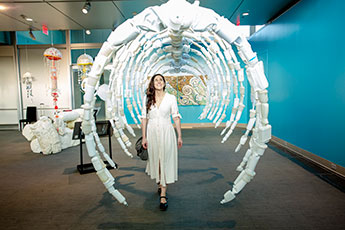 It’s possible to walk through the “Whale Ribcage” sculpture. Salvaged bait traps, buoys and bucket lids are components of the art piece. courtesy of The Clinton Presidential Center

Another popular creation is “Whale Ribcage,” a skeleton tall and wide enough to walk through. A sign notes that the stomach of a gray whale found dead on the Pacific Coast contained plastic bags, towels, surgical gloves, sweatpants, duct tape, fishing line and a golf ball.

One of the most photographed displays, according to Thielemier, is “Greta the Great White Shark,” which is set up so that visitors can pose for a selfie with the sculpture looming over them. Greta’s marine debris includes a toy car bumper, a shovel, water bottles, a face mask, a cigarette lighter, bottle caps and beach toys.

With schools back in session, student groups are admitted free if reservations have been made. Thielemier observes that “one effective strategy for increasing awareness about recycling and waste reduction is to educate children.”

Responses from youngsters, he adds, “tell me that they are remarkably aware of the problem and understand that we must change our behaviors — consume less, reduce the amount of waste we create and recycle more — to protect our environment.”

That could be construed as a sermon. And “Washed Ashore” does focus on its ringing message in sculpture after sculpture. But Pozzi’s sea creatures are so fanciful that the call to action goes down as a refreshing taste of fun.