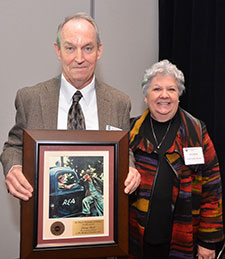 Danny Buck with his wife, Pat.

Buck has served on the board of directors at South Central Arkansas Electric Cooperative since 1984. He has obtained the Credentialed Cooperative Director (CCD) certificate from the National Rural Electric Cooperative Association (NRECA) and has completed the NRECA Board Leadership Program. He has reached director gold status. Buck has served on the AECC and AECI boards of directors throughout his tenure as a director, including as chairman of the AECC board in 2003.

Buck has owned and operated United Auto Sales and Salvage for the past 42 years. Buck served six years in the U.S. Marine Corps Reserve as a military policeman and now serves his community as board vice president for the Hollywood Rural Volunteer Fire Department. He is an active member of First Baptist Church in Arkadelphia. He and his wife, Pat, have been married for 48 years. They live in the Hollywood community of Clark County. 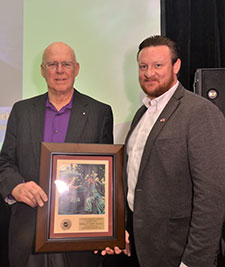 op’sboard, representing District 4, for 35 years. He has obtained the CCD certificate from NRECA. Derickson is a graduate of Leslie High School, attended Arkansas Tech University and is a veteran of the U.S. Navy. He is the former owner of Derickson Lumber Company, a four-generation family business. He is a member of Gideon International and has served as chairman of the board for the Leslie Medical Facility. In addition, he has served on several other boards, including the Leslie City Council, Leslie School Board, Searcy County Civic Center Board, the Library Board, the Economic Development Board and the board of the state Chamber of Commerce.

Thompson began his service on the Woodruff Electric Board of Directors in 1984, representing District 9. He is a lifelong resident of the Turkey Scratch community where he and his family have been in the farming and commerce industries. Today, he owns and operates a local country store and stays involved in cotton, hay, rice and soybean farming.

Thompson has previously served as Woodruff Electric’s board chairman. He has completed all three levels of 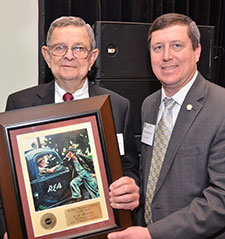 B. Thompson Jr., left, with Michael Swan, president and CEO of Woodruff Electric.

the NRECA Director Certificate Program, which are the CCD certificate, Board Leadership certificate and the Board Gold Credential.

Thompson served nine years in the Arkansas National Guard after receiving a degree in agriculture from the University of Arkansas at Fayetteville. He is a member of the Lee County Farm Bureau and serves as the president of the Marvell Rural Water Association. He served for 15 years on the Marvell Academy School Board, including five years as board president. He has been a member of the Masonic Lodge for more than 55 years and is a 32nd degree Mason and a Shriner. Thompson and his wife, Peggy, are members of the First Christian Church in Marianna.

Since it was established in 2002, 75 board members from the state’s 17 electric distribution co-ops have received the Pioneer Award. Honorees receive a plaque and have their names listed on a special Wall of Fame at the AECC/AECI headquarters in Little Rock.